"Avatar" vs. "Hurt Locker": Battle of the exes

Kathryn Bigelow could be the first female director to win an Oscar. If her former hubby doesn't stop her, that is 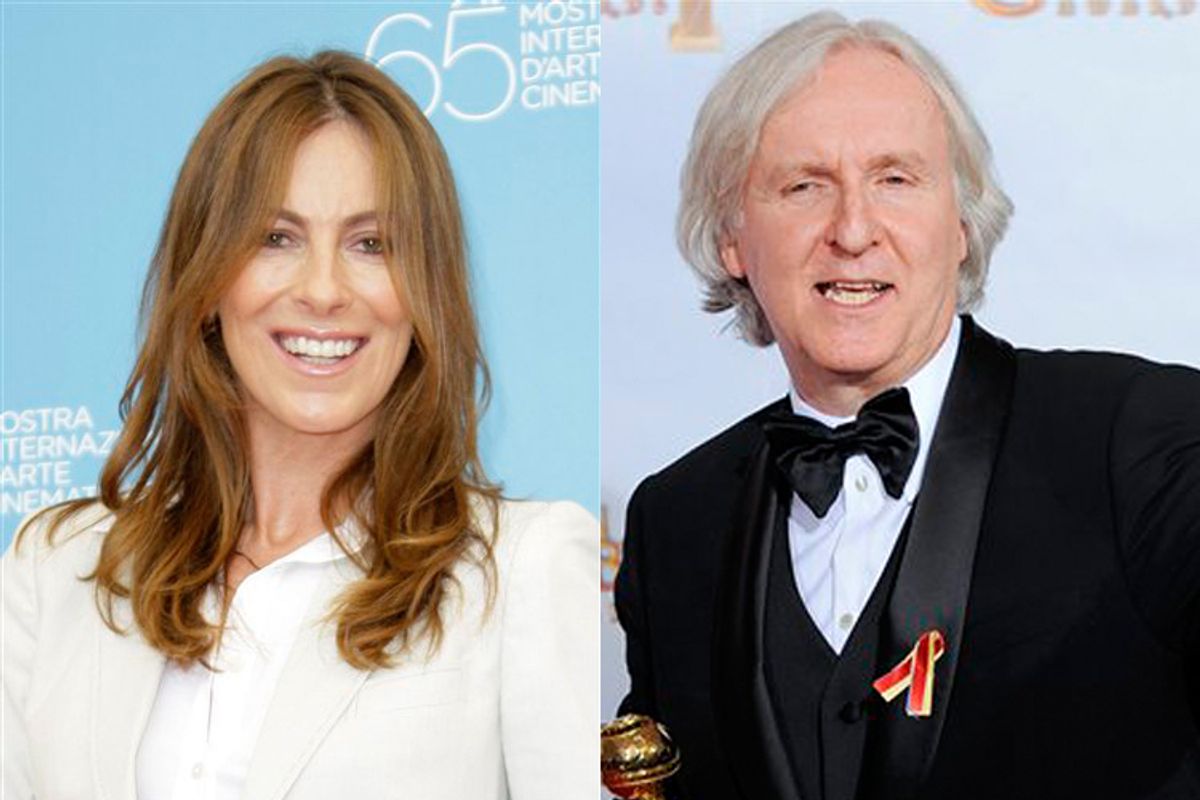 On Saturday, Jan. 30, the Director’s Guild of America will give out its annual awards, including the most prestigious: Best Directorial Achievement in Feature Film, which generally reveals who will later win the Academy Award for best director (since the two awards share a nearly identical voting pool).

The big question this year is: Will an ex-husband prevent a woman from finally winning best director?

Since the first Academy Awards were given out in 1929, only three women have even been nominated for the directing Oscar: Lina Wertmuller in 1976 for "Seven Beauties," Jane Campion in 1993 for "The Piano" and Sofia Coppola in 2003 for "Lost in Translation." That’s right: It took nearly 50 years for Oscar to even wink in (or at) a woman’s direction. But then, there’s a very small pool of women to draw from for this award. Despite the gains women have made in almost all other careers, female directors are still a rarity, especially when you’re talking about movies that get major award consideration.

Still, if the likes of Kevin Costner and Mel Gibson can win Oscars the very first time they direct a movie, why haven’t experienced and commercially successful directors like Penny Marshall, Amy Heckerling, Nora Ephron and Nancy Meyers even been nominated?

And I’m no fan of Barbra Streisand, but her lack of a directorial nomination in 1991 when "Prince of Tides" was up for best picture was a clear snub. (It’s exceedingly rare for a movie to not have paired nominations for the two awards. After all, who created that best picture? A few male directors have also been spurned, but since 77 of them have been nominated, that’s not so shocking. By contrast, Streisand’s omission means 25 percent of the women who’ve directed best picture nominees have been snubbed.)

2010 looked to be the year when things might finally change. Having directed one of the best films of 2009, "The Hurt Locker," Kathryn Bigelow was an early favorite to win the Oscar ... before "Avatar" came out and dazzled everyone. After winning the best director award at the Golden Globes, James Cameron seems poised to win the DGA and Oscar statuettes as well. And if he does, he will keep the all-male sanctity of the most prestigious movie award intact.

Never one for modesty (his "I’m King of the World" Oscar acceptance speech for "Titanic" is still legendary even in a town that could be called Egowood), Cameron actually saluted Bigelow in his Golden Globes acceptance speech: "Frankly, I thought Kathryn was going to get this. She richly deserves it." Being at least a theoretical feminist (given the strong female characters in his films), Cameron must feel a tad sensitive about the situation he’s in. It’s to his credit that he may actually regret taking something away from his ex-wife … a feeling that would make him unique among divorced men.

But the fact remains that a scenario all-too-familiar to the female gender seems about to play out again: A woman poised for a well-deserved triumph gets preempted by a man making a flashy move that steals all the attention. Last year, it was called the Democratic nomination. This year, it’s the Oscar race.

Adding to the irony is the fact that Bigelow isn’t a typical female director. She doesn’t make comedies like Penny Marshall or movies about relationships like Nora Ephron or Nancy Meyers – she makes hardcore action movies. There’s scarcely a woman to be seen in "The Hurt Locker" (far fewer than are actually in Iraq). Instead Bigelow tells a brutal war story of bomb squad members – the most-macho heroes in an ultra-macho setting – acting out classic male patterns of competition and camaraderie.

It’s Cameron who’s made the hearts-and-flowers film, showing us a beautiful and mystical world of living treehouses, My Little Pony dragons you can tame and ride, and magical hairstyles that are a conduit to all living things (including your lover’s pleasure center). Yes, there’s a typical mindless slam-bang action sequence at the end of "Avatar," but it feels utterly de rigueur, as if they couldn’t figure out how else to wrap the whole thing up. ("Well, we can always have the two guys duke it out!" "Cool, let’s do that!") Up to that point, the movie is a Sierra Club commercial combined with a Saturday morning cartoon for pre-adolescent girls.

Of course, it’s not the content that people are lauding Cameron for – it’s the technology. "Avatar" is undoubtedly the flashiest film of 2009, one that makes a big impression while you’re watching it with those cool 3-D glasses. But like all movies that rely primarily on technological whiz-bang for their impact, it will date quickly, since technology has a pesky way of moving relentlessly forward.

It’s the movies with compelling stories and characters that we not only remember but love. "Star Wars" also initially attracted audiences with unprecedented special effects, but what is it that people actually love to recall about it? The idea of the Force, the struggle of good vs. evil, the archetypal characters and the many memorable lines that have become beloved parts of our everyday dialogue. The special effects now seem rather quaint, and George Lucas was misguided in adding CGI images in a later special edition – while state-of-the-art at the time, they now look even more dated than the original effects, and stand out as awkwardly as a ship suddenly seen passing behind the "Mona Lisa." Although it's been labeled a breakthrough movie on the level of "Star Wars," Avatar offers stunning visuals and imaginative details but no Darth Vader or Han Solo or even R2D2, not one line of memorable dialogue, and only a crude mash-up of enviro-spiritual ideology's greatest hits for its message.

"The Hurt Locker," by contrast, has been hailed as the best film so far about the Iraq war -- and a great war film, period. Anchored by a stunning performance by Jeremy Renner as Sgt. James, a bomb defuser who is addicted to the thrill of his death-defying job, it illuminates a maddeningly intractable conflict by taking us inside a more manageable one, between the members of a small bomb disposal unit, before going yet one more layer into the Russian doll and exposing the inner conflicts of the lead character.

Bombs explode but people generally implode. Any director can jolt the audience with the former, but only a gifted one can create scenes of realistic psychic destruction. "The Hurt Locker" is full of edge-of-your-seat scenes in which the characters face death, and unlike most Hollywood films (like "Avatar"), you never doubt that any of them might die. War is unpredictable, capricious and vicious, and Bigelow makes sure we know that. But she also shows the costs beyond body bags and amputations, and how walking away from a war can be even more difficult than being carried away.

For that, she deserves an award. And I hope that the directors of America are man enough to give her one.