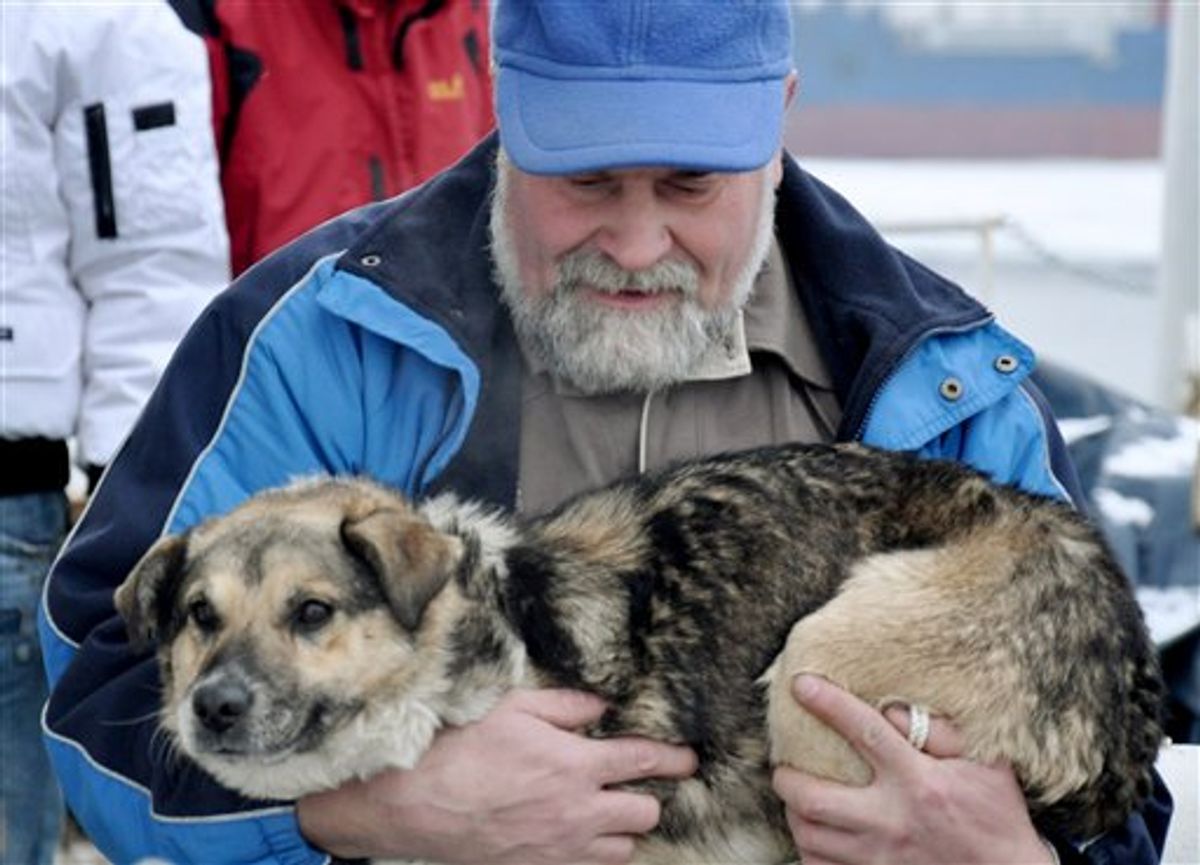 In this photo taken Tuesday, Jan. 26, 2010 and made available Thursday, Jan 28, 2010 Adam Buczynski carries a dog found floating cold and alone on an ice floe 15 miles off the Polish Baltic Sea coast in Gdynia, Poland. Buczynski, a sailor from the ship "Baltic" pulled out the dog from the ice floe. (AP Photo/Maciej Czoska) ** POLAND OUT ** (AP)
--

A frightened, shivering dog has been rescued after floating alone on an ice floe down Poland's Vistula River and then 15 miles (24 kilometers) out into the Baltic Sea.

Now his saviors just have to figure out who really owns him.

Four people have already claimed him, but so far rescuers say there's been no wagging tail of joy from the miracle dog they nicknamed "Baltic."

The dog's frozen odyssey came as Poland suffers through a winter cold snap, with temperatures dipping to below minus 4 degrees Fahrenheit (minus 20 Celsius).

The thick-furred male dog was found adrift Monday by the crew of the Baltica, a Polish ship of ocean scientists carrying out research in the Baltic Sea. Researcher Natalia Drgas said Thursday the rescue was difficult and at one point it seemed the dog had drowned.

"It was really a tough struggle. It kept slipping into the water and crawling back on top of the ice. At one point it vanished underwater, under the ship and we thought it was the end, but it emerged again and crawled on an ice sheet," Drgas said.

At that point, the crew lowered a pontoon down to the water and a crew member managed to grab the dog by the scruff of his neck and pull him to safety.

Too weak to shake off the frigid water, Baltic was dried and wrapped in blankets. After he warmed up, he was massaged, fed and soon got on his feet to seek company, Drgas said.

A firefighter on duty in Grudziadz, on the Vistula river 60 miles (100 kilometers) inland from the Bay of Gdansk, told The Associated Press the dog was spotted Saturday floating on ice through the city. Firefighters tried to save the dog but could not approach him on the shifting ice sheets, said the officer, who spoke on condition of anonymity.

The Baltica crew, now moored in the port city of Gdynia, have been searching for the dog's owners, ship captain Jerzy Wosachlo said. So far four people have claimed him, but Baltic has not claimed any of them back, Drgas said.

The dog didn't welcome the first two people to come for him, keeping his distance and showing no recognition to a couple on Wednesday and a woman on Thursday who both said he was theirs. Two other would-be owners were still on their way to Gdynia for a possible reunion.

Once in port, the brown-and-black mongrel was taken to a veterinarian, who found him in surprisingly good condition and estimated his age at around 5 or 6. Veterinarian Aleksandra Lawniczak, said the 44-pound (20-kilogram) dog was clearly frightened but in strikingly good shape and had suffered no frostbite.

She described him as a friendly dog who was clearly well treated before getting lost.

Wosachlo said the research team is prepared to adopt Baltic if his original owner is never found.