Greek wines ditch their tragic past

Forget the tourist-souvenir plonk; here's our guide to Greece's great new styles made from ancient grapes 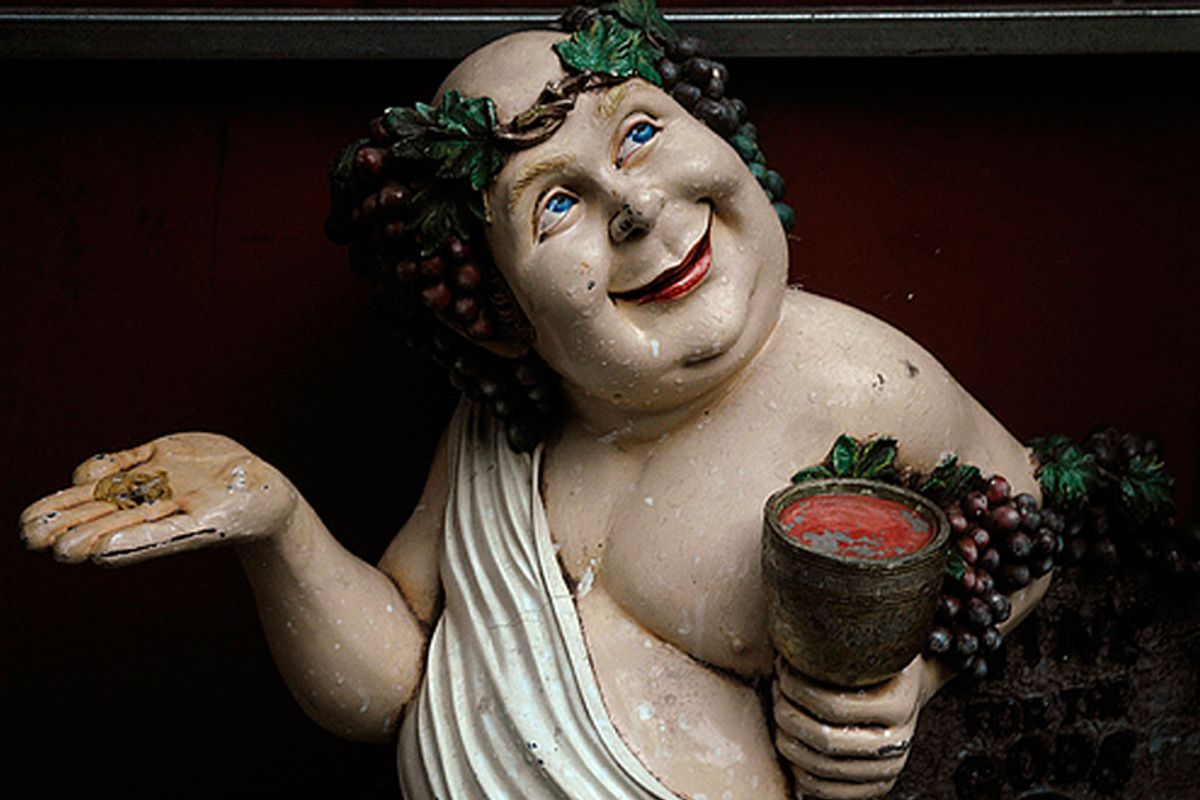 We're thrilled to bring you the wine wisdom of Steven Kolpan, the chairman of wine studies at the Culinary Institute of America, who will be stopping by regularly with words on what to drink. Today, an introduction to the obscure, affordable treasure trove of Greek wines.

It is almost a cliché to discuss the importance of wine in ancient Greece. Yes, it's everywhere in its mythology and history, but it's also widely held that the best days of Greek wine have come and gone ... maybe thousands of years ago. Most of us avoid Retsina -- the only Greek wine we vaguely know -- as undrinkable, and think of the rest of Greece as making charmless juice for its tourist trade.

But over the last 25 years, extraordinarily gifted wine producers of Greece have taken Socrates' admonition to live the examined life. They've corrected and eliminated many of their problems and revived what was a moribund and neglected industry. They are producing, frankly, some of the finest wines being made now, from ancient Greek varietals with obscure names -- Xinomavro and Agiorghitiko for red wines; Assyrtiko, Malagousia, Robola, and Moschfilero for whites -- in their premier regions of Macedonia, Peloponnese, Epirus, Sterea Ellada, and the Aegean and Ionian islands. Everything ancient is new again.

The modern wines of Greece run the gamut from vibrant and fresh whites to strawberry-redolent dry rosés to age-worthy complex reds. I have come away recently mightily impressed by their quality, but I am even more knocked out by how well these wines pair with food. The lightest ones enhance even the simplest dishes, the medium-bodied whites and reds serve as another flavor element in the dish -- a spice, a sauce -- and the full-bodied reds bathe the palate in luxurious, velvety tannin-tinged black fruits and earthy smoke that challenge and elevate even the most elaborate meals.

So what's the catch? Well, it's true that Greek wine labels aren't easy to read; they take patience. Some of the best wines have Greek language labels with English translations only on the back label. Even those that use English characters to name the wines still may be difficult to fathom because very few of us will recognize the names of Greek grapes (as you can see above) or growing regions. (A nice Naoussa, anyone?) Complicating matters is that many of the wines have proprietary labels (e.g., Amethystos, Ramnista). Seek out savvy and enthusiastic wine merchants or sommeliers, and be sure to check out the tremendously helpful sites allaboutgreekwine.com and greekwinemakers.com, filled with information on grape types and regions. (Greece also produces good-quality wines made from international grape varietals -- Chardonnay, Cabernet Sauvignon, Syrah, etc. -- with labels that are far easier to decipher. But it is the wines produced from little-known native Greek varieties that will bring excitement to the table.)

Perhaps the best way to approach Greek wines is by thinking about the qualities we like in wines from other, more familiar parts of the world. For most American wine drinkers that means thinking about favorite varietal-based wines and/or wines from a particular growing region of the world. Can we find Greek wines that will slake our thirst, taste reassuringly familiar, pair well with our favorite foods, deliver good value, and open our eyes to something new? Yes, yes, yes, yes, and yes.

Below are some of the Greek wines I've been most impressed by lately, along with their more well-known analogues in bold.

Xinomavro grapes make for full-bodied reds in the Naoussa region of Macedonia. The wines are wonderfully earthy, reminiscent of a blend of Syrah from France's northern Rhône Valley and Nebbiolo from Italy's Piedmont. Kir-Yianni makes especially stunning examples, such as the 2004 Naoussa Single Vineyard Xinomavro ($35), the vision of Yiannis Boutaris, scion of the famous Boutari family. Boutaris left his family's fold in 1996 to make his own artisan wines, with the help of his son Mihalis, who puts his U.C. Davis training to work managing the vineyards.

Sure to appeal to Barbaresco fans is another Kir-Yianni standout, 2003 Ramnista, also 100 percent Xinomavro, approachable and harmonious. If you enjoy Spanish rosé from Navarra, try Kir-Yianni's deliciously dry 2007 Akakies, made from Xinomavro ($10). Appealing to Bordeaux (especially Graves) drinkers is the 2006 Yianakohori ($20), named for the estate on which the wine's Xinomavro and Merlot grapes are grown, a flagship wine for Kir-Yianni.

Also from Macedonia are wines made by Evangelos Gerovassiliou, the chief winemaker at the esteemed Carras Estate who also worked with Emile Peynaud in Bordeaux. He has his own project, Domaine Gerovassiliou, under way in his hometown of Epanomi. These are excellent examples of international varietal wines: an attractive Syrah rosé ($10), an approachable Cabernet/Merlot blend ($25), and a charming white that is 50 percent Sauvignon Blanc / 50 percent Assyrtiko ($15); all 2007 or 2008. One of the best whites I tasted, which will charm lovers of New Zealand Sauvignon Blanc as well as Riesling aficionados, is Domaine Gerovassiliou's 2007 varietal Malagousia ($16). His Syrah is a down-to-earth Rhône style winner ($25).

Homer first called Peloponnese "Ampeloessa," which means "full of vines." Here, close to the legendary Olympia, is the Mercouri Estate, now owned by the fourth generation of the Mercouri family. Loire Valley fans who admire complex Chenin Blanc-based wines will love, like me, the white 2004 Foloï ($17), a fresh and fruity but ultimately dry wine. For those of us who wish they could drink Grand Cru Burgundy, the red 2004 Domaine Mercouri ($30), made from 85 percent Refosco (originally imported from Friuli in Italy in the 19th century) and 15 percent Mavrodaphne, is full-bodied and complex, layered with tannins and black fruits, driven by a peppery minerality.

Other wonderful wines from Peloponnese include the Merlot-rich "right bank" Bordeaux-reminiscent Domaine Spiropoulos 2004 Red Stag ($18), which is made from 100 percent Agiorghitiko by U.C. Davis graduate Apostolos Spiropoulos. Spiropoulos also produces the white 2007 Mantinia ($14), from the Moschofilero grape grown in certified organic vineyards. Wonderful with richer fish dishes, Mantinia will no doubt please Sauvignon Blanc or Viognier drinkers. Finally, look for the easy-drinking 2007 Patras white and the 2006 Nemea red ($12 each) from the Kouros Estate; good wines and good value.

Look for two whites from Gentilini in the Ionian Islands: 2007 Classico ($13) and 2006 Robola of Cephalonia ($16). Both are fresh, fruit-driven, refreshing wines with just enough complexity to enhance fish and vegetable dishes.

Other quality Greek wine producers with wide distribution in the United States include Boutari, Oenofros, Tselepos, Skouras, Doamine Porto Carras, Karyda, Ktima, and Costa Lazaridis. Greek wine prices start at under $10, with most under $25. Of course, if you want to splurge on a Macedonian classic, the rare 1990 Château Carras Reserve (100 percent Cabernet Sauvignon) will cost about $150.

So, taste the fine wines of Greece now; they have never been better. When it comes to beautifully crafted, food-friendly, and even surprising wines, I am happy to say that is all Greek to me.