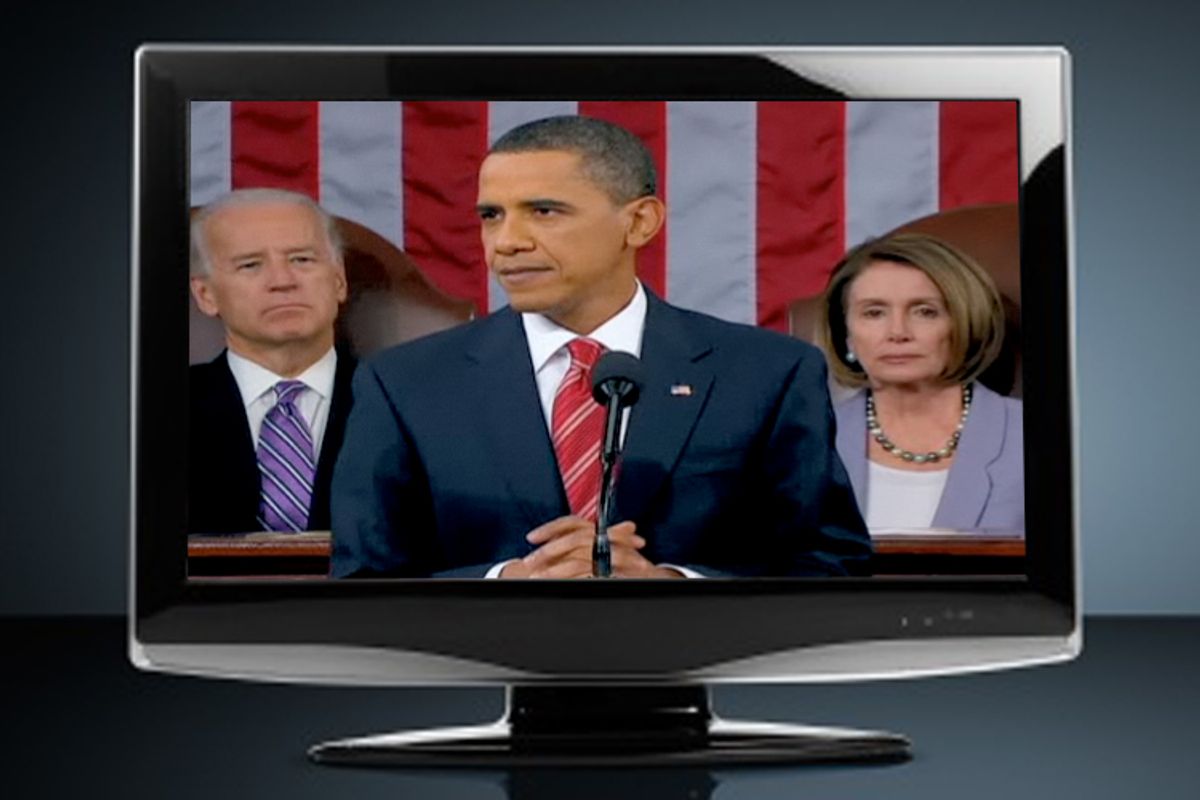 For the 20 people gathered at one of the State of the Union "watch parties" put on by Organizing for America, it was 2008 again on Wednesday night, and all was right with the world. There was Barack Obama, gazing down in Shepard Fairey's iconic blue and red print from the living room wall at his image on the TV across the room. There was David Plouffe on the speakerphone before the speech, just like in the good old days, when he rallied the troops to bury John McCain and the entire Republican Party in an army of voters. And best of all, as far as these activists were concerned, the strangely passive president -- held hostage to his own party's inability to actually use its majority in Congress -- was gone, replaced by someone who sounded an awful lot like the guy who inspired a movement two years ago.

"It's like he's back," said Kristin Szakos, the party's host. Szakos, who got involved in Obama's campaign online nearly three years ago and wound up a regional coordinator in the general election, is more or less the Platonic ideal of the type of engagement Obama aides said they were building all along. After the 2008 election ended, she decided to focus on local politics, and finding no candidates she could convince to run for Charlottesville's city council, she ran -- and won -- herself last year.

But the time since candidate Obama became President Obama hasn't necessarily been so pleasant for Szakos and her guests. Governing, it turns out, is a lot less inspiring than campaigning, even with enormous numbers of Democrats in Congress behind Obama. "It's ugly, and it's frustrating, and it's soul-sucking" to watch the legislative process churn along, she said. "And I think for most of us who want our morals black and white, and who believe that there is such a thing as right and wrong -- and you should know which one is which, and just do it -- to watch legislation happen is really hard... People are watching more closely, and they're seeing how nasty it gets. People like me never really watched Congress work quite so closely as they have this time."

This part of Virginia was the home of one of the great triumphs of the Obama campaign two years ago. Not only did he win the state, the first Democrat to do so in 44 years, but a surge of new voters helped knock Republican Rep. Virgil Goode out of his House seat in favor of Democrat Tom Perriello. A year later, though, most of those voters sat home as Republican Bob McDonnell cruised to the governor's mansion (and the GOP response Wednesday night, which Szakos refused to let anyone watch in her house, afraid he'd crush the spirit Obama had revived). Progressives are still organizing actively here; the OFA Web site listed 15 watch parties within 45 miles of Charlottesville. But a lot of their energy has been going into the endless fight to pass healthcare reform, and it was starting to wane.

"They needed a pep talk," said Jim Nix, a retired intelligence analyst and another campaign volunteer-turned-Democratic leader -- he went from "apprentice envelope-stuffer" in early 2007 to, as of last week, co-chairman of the Charlottesville City Democratic Committee. Many of the people at Szakos's house for the watch party had been making phone calls into Massachusetts to try to turn out the vote for Martha Coakley. "It was really a shock when that didn't work."

So there was a lot of nervous energy in the room, even before the speech. The volunteers arrived at 7:30 p.m., a full 90 minutes before Obama was scheduled to arrive in the House chamber. They were supposed to hear from Perriello by phone, but Szakos didn't have long-distance service on her home line, and by the time someone figured out how to dial into D.C., he had already headed in to hear the address. (He nabbed a good seat, and the party cheered him every time he appeared on TV; a campaign staffer promised everyone there would be able to get on a conference call with Perriello on Thursday.)

A few minutes later, a Democratic National Committee computer system rang the phone, connecting the party to some hold music and, eventually, to Plouffe and OFA director Mitch Stewart. "This speech, I hope, will really rekindle a lot of enthusiasm," Plouffe said. "Barack Obama ran to try to change Washington -- he can't do it alone." The DNC will be tapping everyone to try to get voters out in the November midterms, he promised. Everyone at the party was instructed, by Szakos, to call 10 people in the next few days and get them to call their House and Senate members to support healthcare reform.

Chatting anxiously after Plouffe hung up, no one paid any attention to the TV anchors babbling before Obama arrived. "I wish he would move to the left," said Jim Miller, a retired textbook editor and professor from Earlysville, Va. "The people need to know that there's a man in the White House who's on their side." Some other activists complained about friends who hadn't voted in the gubernatorial race, or fretted that recent Citizens United court ruling would, effectively, be the end of democracy.

But as soon as the speech started, Szakos cut the lights, and the room fell quiet. And then it slowly came back to life, with people murmuring approval for Obama's new feisty tone, and clapping at the applause lines. The first time the camera panned to McCain and some other Senate Republicans in the audience, someone called out, "Fuck 'em." Like Democratic officials in Washington, the OFA volunteers were shocked to see no Republicans cheering Obama's promise to pass a jobs bill or crack down on Wall Street. Not everything Obama said won his partisans over; his pledge for nuclear energy and so-called "clean coal" got booed, as did his call for a spending freeze. But the populist streak, and especially the call for Democrats in Congress to remember that they still run the place, got people cheering.

And when Obama wrapped up by promising resolve, it was clear that at least some of the loyal supporters who got him to the White House are ready to get back to work. "We don't quit -- I don't quit," the president said. "Now show it!" someone yelled back at the TV.

Come Thursday morning, of course, the depressing reality could still be that the speech, on its own, didn't change much in Washington. But if Obama is really ready to fight for his agenda, the speech may have helped him put the army he'll need back together.

State Of The Union