A different kind of Republican response

Virginia Gov. Bob McDonnell leads off the GOP's rebuttal to the president with an odd gambit 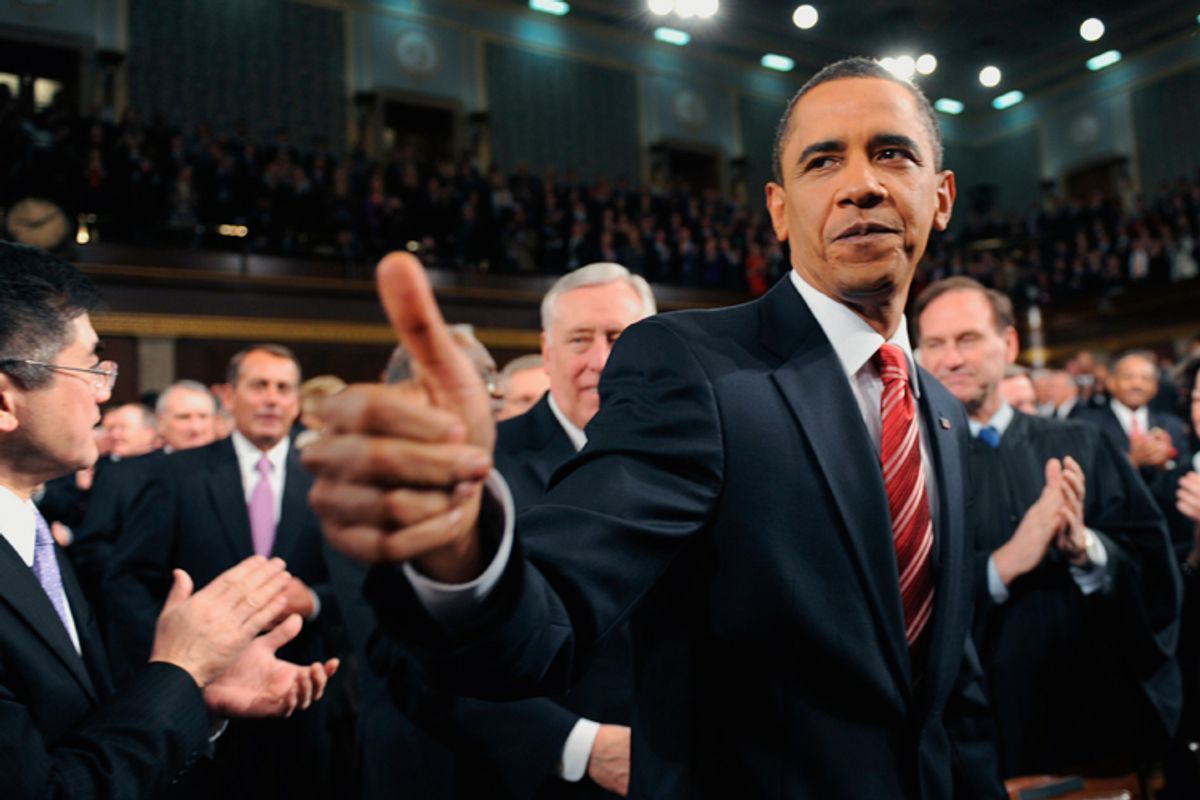 Barack Obama greets members of Congress on his way to deliver his first State of the Union address.
--

11:45 p.m.: Below, a sampling of reactions to Obama's speech, from both sides of the aisle.

"President Obama engaged America in a conversation about what has worked, what needs improvement and how we can move forward together. Senate Democrats view the challenge of cleaning up the mess we inherited as an opportunity to set our nation back on the path to progress and prosperity.

"Nevadans and all Americans should know that their leaders in Washington understand their struggles and have a plan to relieve them. Jobs are still too few, health care is still too scarce and expensive, foreclosures are still too frequent and our energy future is still too treacherous. With thousands of Nevadans and millions of Americans under this tremendous pressure to make ends meet, now is no time to let up. As the President expressed tonight, we are moving full speed ahead in bringing about the meaningful change that we were sent to Washington to deliver."

House Minority Leader John Boehner: "We were pleased to welcome the President to the People’s House tonight for his annual address to the nation. We had hoped to hear a new commitment to keep his promises to govern from the center, change the tone in Washington, and work with both parties in a bipartisan way to help small businesses create jobs and get our economy moving again. Unfortunately, the President and the Democrats in charge of Congress still aren’t listening to the American people."

"The American people were looking for President Obama to change course tonight, and they got more of the same job-killing policies instead. If the President and the Democratic leaders of Congress are serious about helping the middle class, they will abandon their job-killing agenda, which is making it harder for middle-class families and small businesses to save, invest, and hire. That includes a trillion-dollar ‘stimulus’ that isn’t working, a fiscally-irresponsible budget that doubles our debt in five years and triples it in 10, a costly government takeover of health care, and a massive national energy tax. The President’s message isn’t the problem, it’s his job-killing policies. The American people don’t want them, and that’s why they are saying ‘Enough is enough.’

"For the last year, Republicans have been standing with the American people in asking the question: ‘where are the jobs?’ But all we have seen from Washington Democrats is more reckless spending and more unsustainable debt. Republicans have offered better solutions to help small businesses create jobs, lower health care premiums by up to 10 percent, and an ‘all-of-the-above’ strategy to clean up the environment, increase American energy production, and promote clean energy alternatives. It’s long past time for Democrats to start working with Republicans on common-sense solutions on behalf of middle-class families and small businesses struggling in this economy."

Sen. John McCain, R-Ariz., on "Don't Ask, Don't Tell": "In his State of the Union address, President Obama asked Congress to repeal the 'Don’t Ask, Don’t Tell' policy. I am immensely proud of, and thankful for, every American who wears the uniform of our country, especially at a time of war, and I believe it would be a mistake to repeal the policy.

"This successful policy has been in effect for over fifteen years, and it is well understood and predominantly supported by our military at all levels. We have the best trained, best equipped, and most professional force in the history of our country, and the men and women in uniform are performing heroically in two wars. At a time when our Armed Forces are fighting and sacrificing on the battlefield, now is not the time to abandon the policy."

Sen. Chris Dodd, D-Conn., on his Twitter account: "I only hope my Republican colleagues use this moment as an opportunity to re-think their strategy of mindless obstructionism."

Sen. Max Baucus, D-Mont.: "Working families in Montana and across the country are struggling with an economy that isn’t creating the jobs Americans need or the opportunities they want, and tonight we heard a continued commitment to building the middle-class economy. We need to act to help small businesses grow, to create jobs producing new forms of energy and put Americans to work rebuilding infrastructure like our highways, bridges and water systems. I applaud the President’s dedication to bring new hope to our economy. In the coming weeks, I will work with my colleagues to pursue targeted tax cuts that fulfill the President’s goals of strengthening the middle class, bolstering our economy and creating American jobs.

"Health reform also represents a critical component in our effort to combat a decade of ballooning federal debt. Health reform will cut the deficit by more than $100 billion in the first ten years and by hundreds of billions more in the decade that follows. Reducing the federal debt is critical to a strong and vibrant economy, and we stand with President Obama in our shared commitment to tackle this challenge head on."

Sen. Joe Lieberman, I-Conn., on his Twitter account: "The President effectively changed the subject tonight from HCR to the economy, fiscal responsibility, & the need for more bipartisanship. Now it's up to him and us to act in response to his invocation tonight."

Republican National Committee Chairman Michael Steele: "Tonight, after a year of failed policies and broken promises, President Obama once again demonstrated the rhetorical flair in an attempt to sound populist, if not downright ‘conservative,’ in addressing the very requirements for job creation his administration has ignored for the past year. But, by all accounts, his explanations failed to answer the question on the mind of Americans: ‘When will I get a job?’ Last year, he promised a ‘New Era of Responsibility’ and instead delivered the exact opposite. Now that he’s offering a ‘New Foundation for Prosperity,’ business owners and the unemployed alike have reasons to be worried. There is just no amount of spin and blame shifting that can hide the fact that tonight the President added more zeros to an already burdensome deficit with no explanation as to how he would pay for this ‘new foundation.’ As a good construction worker will tell you – foundations cost money.

"President Obama said he wanted better solutions. Republicans have offered common sense conservative solutions. The people in Virginia, New Jersey and Massachusetts heard our better ideas and voted for them. If the President is serious, he will give Republicans a seat at the table. If not, then we know that this is just more spin, arrogance and a refusal to listen to the American people."

11:25 p.m.: It's more than a little different, but we do appear to have a "You lie!" moment tonight after all. Below, video of Supreme Court Justice Sam Alito apparently mouthing the words "not true" after President Obama the court's recent decision on campaign finance had "reversed a century of law that I believe will open the floodgates for special interests, including foreign corporations, to spend without limit in our elections."

Of course, when Rep. Joe Wilson, R-S.C., shouted "You lie!" at the president, he did so loudly, interrupting Obama. This isn't nearly as rude, but it's still a break with precedent; the justices typically stay basically mute and motionless up in the front of the chamber. And given the Wilson incident, Alito will get some attention for this.

Last year, after a newly inaugurated President Obama addressed Congress in a sort of pseudo-State of the Union, Republicans tapped Louisiana Gov. Bobby Jindal to deliver their official response. The governor's a rising star in the GOP, but he fell flat on his face, delivering a flat speech after Obama's usual soaring rhetoric and looking awkward and lonely by himself.

This year, things were different. Republicans did go to another governor -- Virginia's Bob McDonnell, who was elected just last year and who was a symbolic choice for that reason -- but the setting was something else entirely. Instead of being alone with a camera, McDonnell went to the floor of his state's House of Delegates, where a friendly audience was there to cheer him on with applause just like Obama got.

It was a great idea in theory. The execution was a different story, as it ended up getting stage managed to death. It was certainly nice for McDonnell to have an audience, but somebody went more than a little overboard when they were deciding who'd get to sit behind him for the cameras.

Or maybe it was coincidental that the four people framing the man charged with delivering the Republican response would be (clockwise, starting from top left) a black woman, an Asian man, a pretty blonde woman and a man in military uniform. Also, that Nigerian prince who e-mailed you yesterday? He totally will give you millions of dollars if you just wire him your life savings to show your commitment to helping him.

Ultimately, for that reason and others the staging of McDonnell's response didn't quite come off. The audience idea is a good one, but putting him in a chamber like the one Obama spoke from provokes comparisons between the two, and that comparison only makes Obama look presidential and McDonnell look small.