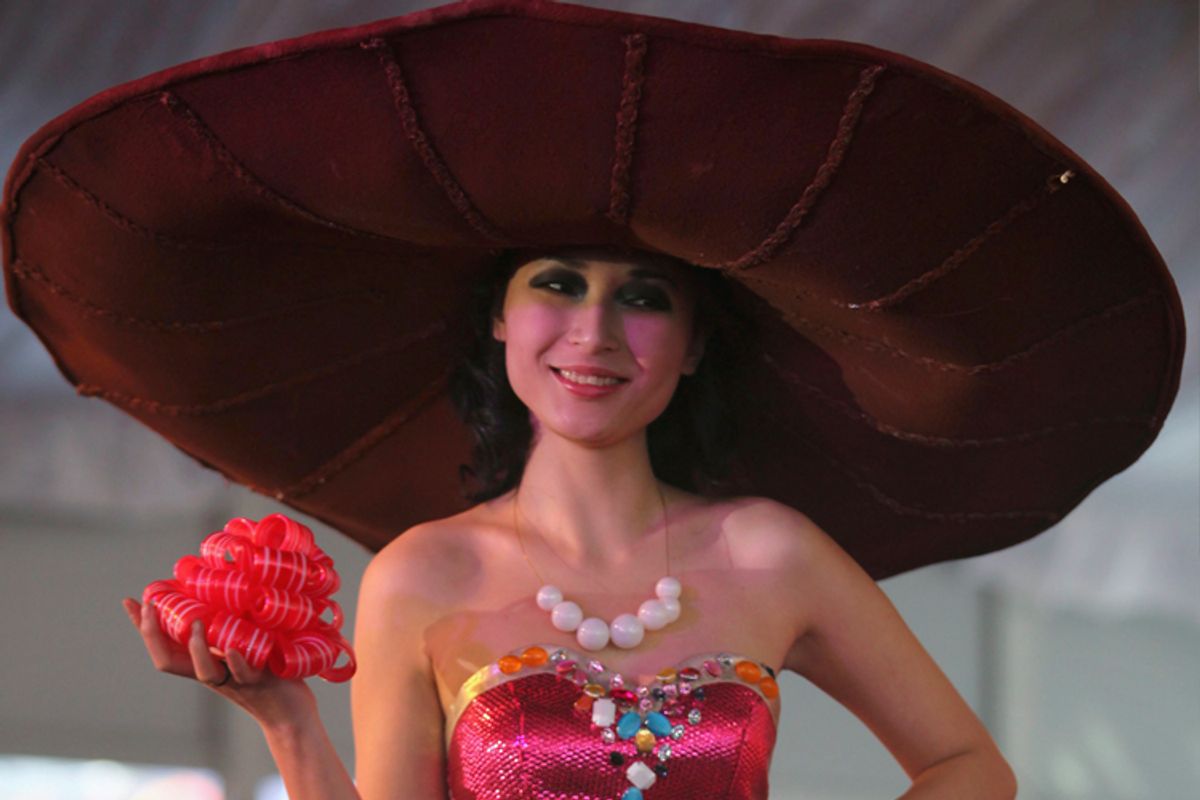 A model wears a creation made of chocolate during a fashion show at the World Chocolate Wonderland, a chocolate theme park, in Beijing.
--

How hard can it be to make Chinese people eat chocolate? While we're struggling to convince Americans to eat less candy, China is trying to get its newly solvent consumer class hooked on the sweets—and wants reel in some international candy business investment while they're at it. How? By opening World Chocolate Wonderland, a chocolate theme park in Beijing that welcomed its first visitors today.

Looking at the Wonderland exhibit, it becomes obvious that the Chinese are not all that familiar with chocolate. The museum misses the mark so many times it's almost hard to watch. A 30-foot replica of The Great Wall? OK. Louis Vuitton handbags? Not so delicious. A chocolate basketball player suspended from the ceiling, about to make a slam-dunk? Let's just say that if you made that in the US you would never be allowed to touch another Hershey bar. The worst of it, though, is the legion of chocolate soldiers, replicas of the famed Terracotta soldiers buried with the First Qin emperor. This stern-faced, armored candy crew is scary like a clown; something that's supposed to be fun turns desperately creepy. And for the ultimate in yuck, the opening ceremony featured a fashion show with models not only working chocolate garments but also sporting chocolate wigs.

To be fair, the chocolate Ming dynasty porcelain is incredibly realistic, while not any more logical (or appetizing) than the other exhibits, and the traditional Chinese robes are amazing. The biggest disappointment: the chocolate BMW. Granted, I've never made a luxury sedan out of chocolate, but I can't help but wonder why they couldn't do better. This thing looks like it rolled straight out of an episode of Ace of Cakes:

A few of the exhibits are mind-bogglingly high concept, like an American $100 bill, embossed with the words "The London Mint." Turns out it's a chocolate replica of a box of chocolate mints made by the Harry London candy company, which is itself a replica of a $100 bill. Peter Ford of the Christian Science Monitor, who visited World Chocolate Wonderland, had his mind similarly blown:

"It is when you reach the hall displaying aspects of modern life that the show reaches its most surreal heights. Sitting on a coffee table, between an outsized chocolate mobile phone and an electric kettle molded from chocolate, is what looks like an ordinary bar of chocolate. But it’s not. It is actually a bundle of real USB flashsticks made to look like chocolate."

In an attempt to foster Chinese chocoholism, the museum will be dismantled via a Willie Wonka style stunt. In April, 500 winners will get to eat the chocolate Great Wall, brick by brick. If this makes you a little queasy, just be glad no one's going to be chomping into the basketball player.