Gayle Haggard says why she stayed

Ted Haggard's wife launches a publicity tour. Is it possible she could help open minds about sexuality? 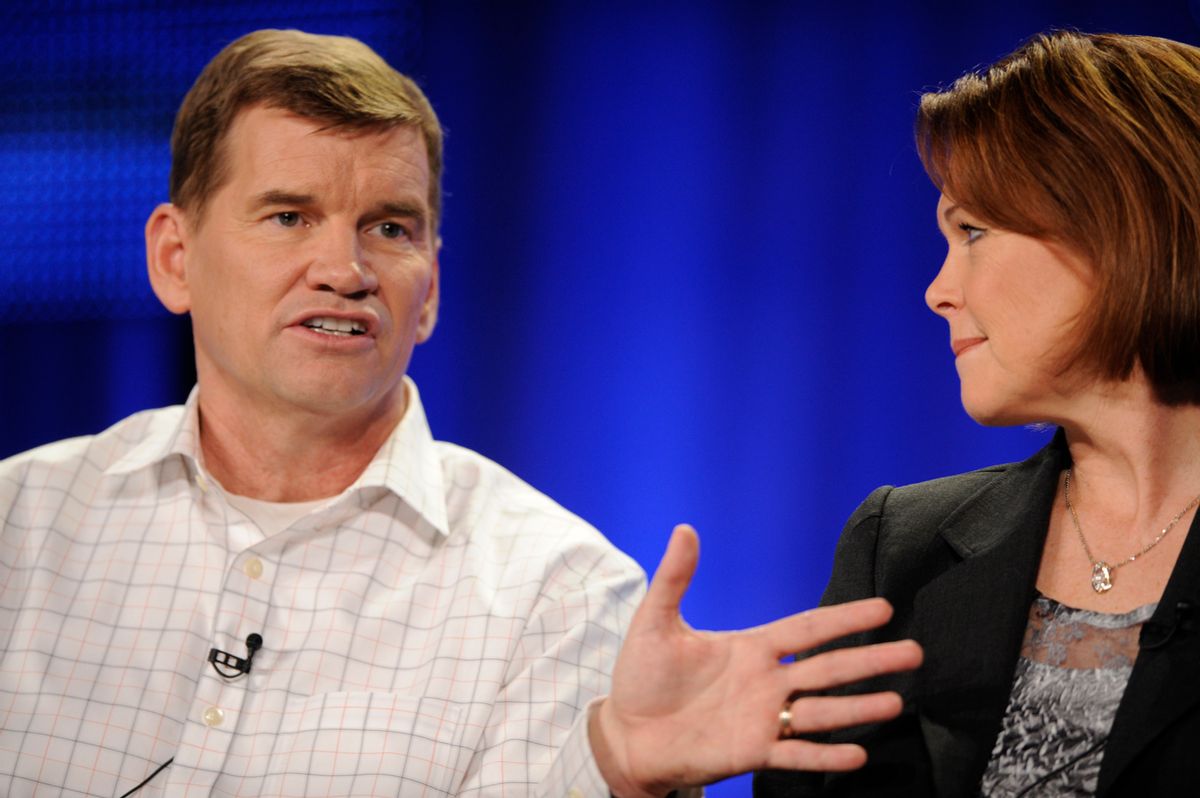 Ted Haggard (L) and wife Gayle answer questions during the HBO panel for the documentary "The Trials of Ted Haggard" at the Television Critics Association winter press tour in Los Angeles January 9, 2009. Haggard, the powerful U.S. evangelist who fell from grace in 2006 amid a gay sex scandal, returned to the spotlight on Friday saying his faith was stronger but he wished people had been more forgiving. REUTERS/Phil McCarten (UNITED STATES) (Reuters)
--

When Ted Haggard, the deeply conservative leader of the National Association of Evangelicals -- and outspoken opponent to gay marriage -- resigned in 2006 after revelations of his crystal meth-fueled involvement with a gay escort, one could almost predict what would happen next. Sure enough, a year later, the preacher emerged from intensive counseling a new and "completely heterosexual" man. Ta da!

Now his wife Gayle is coming forward with her side of the story with "Why I Stayed: The Choices I Made in My Darkest Hour."

Speaking to the "Today Show" on Wednesday, Mrs. Haggard told Meredith Viera that the scandal "was such a shock and such a heartbreak, I couldn’t speak. I couldn’t put the words together. They didn’t fit with the man I knew."

There may be brief satisfaction in seeing hypocrisy exposed – especially for those of us who have the luxury of living as openly and shamelessly as we please. But it's small potatoes to the sadness one feels knowing that Haggard now attributes his self-destructive behavior to childhood sexual abuse, or watching his wife tell Meredith Viera "sexuality is conditioned."

Yet however unorthodox -- and perhaps still denial-rich -- their continued union may appear to outside eyes, both the Haggards seem to have come out of their very public disgrace a little more humbled and open minded.

On "Larry King Live" last night, Haggard admitted, "I have some thoughts in my life and some processes in my life that just don't fit neatly into the boxes, which I think is true for a lot of people." Not quite a rousing dance on a float during Pride Week, but surely a far more tolerant position than staunch, gritted-teeth "total" heterosexuality.

His wife Gayle added, "I haven't doubted my faith in this process, but I have redefined it." Despite all questions and contradictions she and her husband clearly still struggle with -- and the fact that the lady is out there because she's got a book to sell -- Gayle Haggard seems truly to be trying. So when she tells the world, "I learned so much about the diversity of our human makeup and that all of us are the way we are for a reason," that's a good thing. Because she's got a better shot at convincing her fellow evangelical Christians of that sentiment than a whole lot of us ever will.