Remember the illegal destruction of Iraq?

Britain formally investigates whether their actions were criminal, while we look away ever more steadfastly 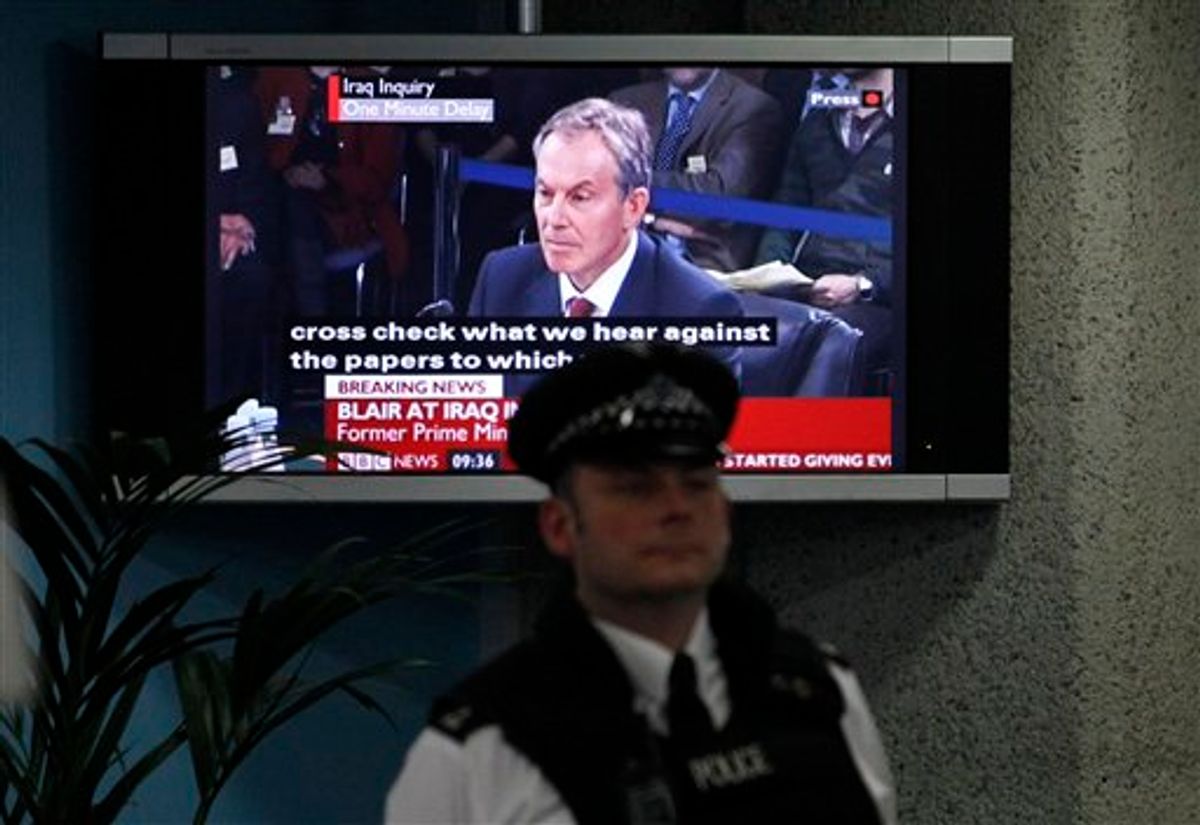 A police officer stands in front of a television screen in the foyer of the venue hosting the Iraq Inquiry in London, as Britain's former Prime Minister Tony Blair speaks, Friday, Jan. 29, 2010. Blair faced tough questioning Friday on his controversial decision to back the 2003 U.S.-led invasion of Iraq, a pledge that led to widespread protests in Britain and weakened his standing as leader. (AP Photo/Matt Dunham) (AP)
--

British political news has been consumed for the last several weeks by a formal inquiry into the illegality and deceit behind Tony Blair's decision to join the U.S. in invading Iraq.  Today, Blair himself is publicly testifying before the investigative commission and is being grilled about numerous false claims he made in the run-up to the war, not only about Iraqi weapons programs (his taxi-cab-derived "45-minutes-to-launch!!" warning) and Saddam's ties to Al Qaeda, but also about secret commitments he made to join the U.S. at a time when he and Bush were still pretending that they were undecided and awaiting the outcome of the U.N. negotiations and the inspection process.

A major focus of the investigation is the illegality of the war.  Some of the most embarrassing details that have emerged concern the conclusions by the British Government's own legal advisers that the invasion of Iraq would be illegal without U.N. approval.  The top British legal officer had concluded that the war would be illegal, only to change his mind under substantial pressure shortly before the invasion.  Several weeks ago, a formal investigation in the Netherlands -- whose government had supported the invasion -- produced the first official adjudication of the legality of the war, and found it illegal, with "no basis in international law."

As Digby notes, all of this stands in stark and shameful contrast to the U.S., which pointedly refuses to "look back" or concern itself with whether it waged an illegal (and horribly destructive) war.  The British inquiry has been widely criticized for being too passive and deferential and lacking any credible threat of accountability (other than disclosure of facts).  Still, one can barely even imagine George Bush and Dick Cheney being hauled before an investigative body and forced, under oath, to testify publicly about what they did as a means of determining the legality or illegality of that war.  Doing that would fundamentally conflict with two leading principles in American political life:  (1) our highest political leaders must never be accountable for actions they take while in power; and (2) whether something they do is "illegal" -- especially the starting of wars -- is utterly irrelevant.  Instead of formally investigating whether they broke the law, we treat them like elder statesmen who deserve a life of luxury and media reverence.  Tony Blair -- who had no discernible expertise or experience in banking -- himself is showered with riches for a "part-time" job by JP Morgan and by other institutions who benefited substantially from his acts in office.

All of this underscores the fact that -- despite how much public debate it has received -- we still childishly, and with moral blindness, refuse to come to terms with the true scope of our wrongdoing when it comes to the Iraq War.  Several hundred thousand Iraqis -- at least -- were killed as a result of this war, with another 4 million being turned into refugees.  As the Iraqi journalist and professor Ali Fadhil put it in 2008, on the fifth anniversary of the U.S. invasion: "basically, my assessment is we have a whole nation called Iraq, now it's wiped out."  Contrary to self-justifying conventional wisdom, the alleged post-surge improvement in Iraqi civil society has not remotely mitigated the destruction spawned by the invasion.  As The Economist detailed in September, 2009, the U.S.-supported Maliki government is relying increasingly on Saddam-era tactics of torture, censorship, lawless sectarian militias, and brutal punishment of dissent: "Human-rights violations are becoming more common. In private many Iraqis, especially educated ones, are asking if their country may go back to being a police state."

The invasion of Iraq was unquestionably one of the greatest crimes of the last several decades.  Imagine what future historians will say about it -- a nakedly aggressive war launched under the falsest of pretenses, in brazen violation of every relevant precept of law, which destroyed an entire country, killed huge numbers of innocent people, and devastated the entire population.  Have we even remotely treated it as what it is?  We're willing to concede it was a "mistake" -- a good-natured and completely understandable lapse of judgment -- but only the shrill and unhinged among us call it a crime.  As always, it's worth recalling that Robert Jackson, the lead prosecutor at the Nuremberg Trials, insisted in his Closing Argument against the Nazi war criminals that "the central crime in this pattern of crimes" was not genocide or mass deportation or concentration camps; rather, "the kingpin which holds them all together, is the plot for aggressive wars."  History teaches that aggressive war is the greatest and most dangerous of all crimes -- as it enables even worse acts of inhumanity -- and illegal, aggressive war is precisely what we did in Iraq, to great devastation.

I'm periodically criticized for an "angry" tone in my writing, which I always find mystifying.  I genuinely don't understand why anger should be avoided or even how it could be.  What other reaction is possible when one looks around and sees the government leaders who committed these grave crimes completely unburdened by any accountability and treated as respectable dignitaries, or watches the Tom Friedmans, Jeffrey Goldbergs, Fred Hiatts and other unrepentent leading media propagandists who helped enable it still feted as Serious and honest experts, or beholds the current Cabinet and Senate filled with people who supported it, or observes the Michael O'Hanlons and Les Gelbs and other Foreign Policy Community luminaries who lent trans-partisan credence to it all continue to traipse around still pompously advocating for more wars that never touch their lives?

A few months ago, I did an MSNBC segment with Dan Senor, who is currently a Fox News contributor, author of a new book hailing the greatness of Israeli innovations, a recent addition to the Council on Foreign Relations, and husband of CNN anchor Campbell Brown.  But back in 2003 and 2004, he was Chief Spokesman for the "Coalition Provisional Authority" in Iraq -- the U.S. occupying force in that country.  Sitting in the green room with him before the segment, I was really disgusted by the paradox that one is supposed to treat him as just some random political adversary deserving of standard civility, respect and respectability -- in other words, a Decent Person is supposed to forget that he was an official who enabled and lied about some of the most monstrous acts of the last many years and is wholly unrepentent.  And, of course, he was going on MSNBC that day to opine about our current foreign policy options:  direct involvement in this horrific crime is no disqualifying factor; it's not even a black mark against someone's credibility and reputation.

At least Robert McNamara had the decency to write a deeply humble mea culpa and spend the last couple decades of his life under a cloud of deep shame and disgrace until he died.  Do you think any of that will happen to any of the people responsible -- in politics, the media and our Foriegn Policy think tanks -- for the unimaginable crimes of the last decade, particularly what was done in Iraq:  Shock and Awe and the Fallujah massacres and Blackwater slaughters and Abu Ghraibs and all the rest?

Of course it won't.  They continue to thrive unabated even as Iraq tries to rebuild itself from the devastation they unleashed.  As toothless as the British investigation appears to be, at least there's some public reckoning, compelled answers from their leaders, and an attempt to determine the precise nature of their crimes.  And the Dutch have formally declared the war in which they were involved to be a crime.  By contrast, we treat it all as a pointless relic of the irrelevant and distant past, all because the people who did it have banded together to decree that the worst possible crime is not what they did, but instead, would be if the rest of us examined what they did and insisted on meaningful accountability.