Johnny Weir dresses like a swan, fights with PETA and performs to "Poker Face." But can the glitter take the gold? 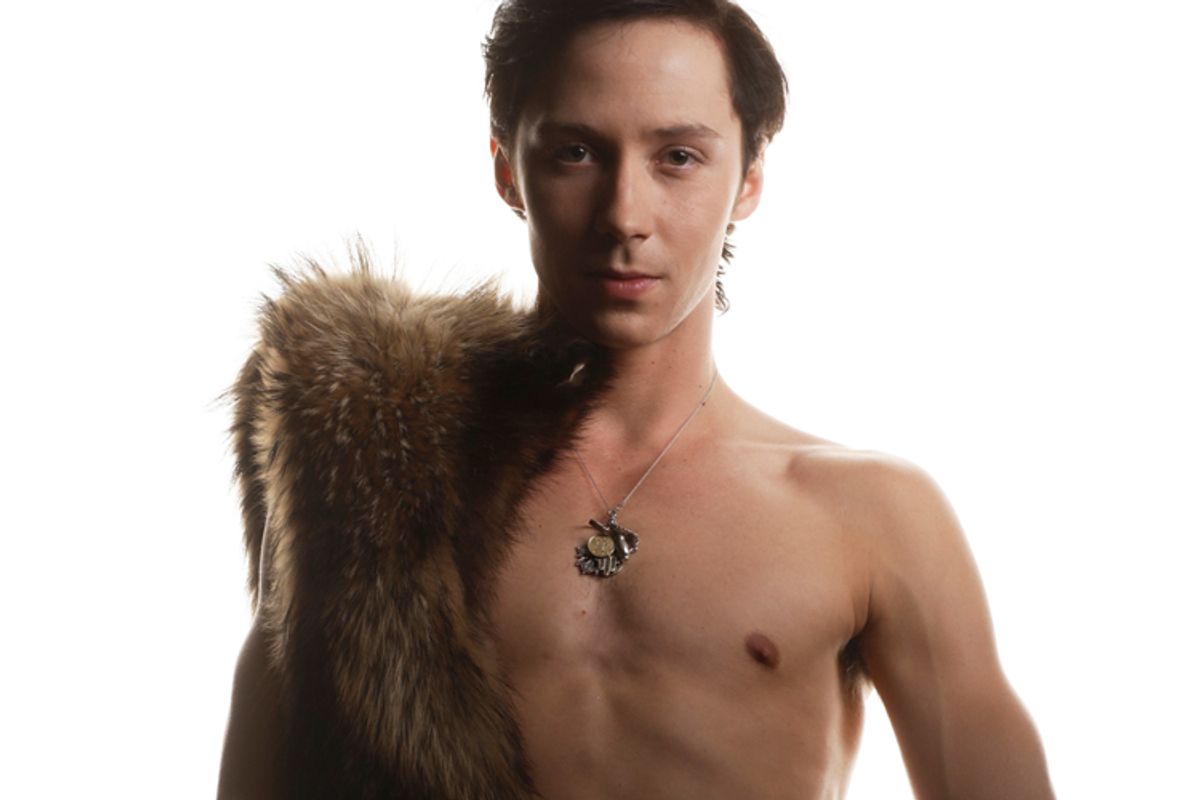 If you crossed Bjork with a disco ball and a hedgehog and put it on skates, you'd get Johnny Weir. How adorably over-the-top is the Olympic hopeful? Let's put it this way – the colorful, occasionally avian skater was the inspiration for Jon Heder's character in "Blades of Glory." He's received threats from animal rights activists for his fondness for fox fur-trimmed costumes -- and claims he responded by sending them back with drawings of dead chipmunks. He reluctantly caved to them just yesterday with a testy public statement.

"I want to publicly acknowledge my knowledge of the fur trade industry and the fact that I am totally understanding of the methods used in this industry. I also understand both sides of the argument of animal activists and fur lovers alike. My knowledge comes from years of torment from several anti-fur groups in America and abroad. ...

"I hope these activists can understand that my decision to change my costume is in no way a victory for them, but a draw. I am not changing in order to appease them, but to protect my integrity and the integrity of the Olympic Games as well as my fellow competitors."

His hilariously entertaining Twitter feed includes updates on his bubble baths. And he recently took ESPN reporter Jim Caple for a manicure/pedicure, vowing, "You're going to love it so much, I think you're going to pee a little bit."In short, Johnny Weir is the most interesting thing to happen to ice since Baileys Irish Cream.

The 25-year-old Pennsylvanian is also a rarity in any sport – a true-blue, late-blooming prodigy. He came to skating at the relatively old age of 12, and first honed his craft on roller skates in his parents' basement.  By age 16, he was the winner of World Junior Figure Skating Championships. Last week, during at exhibition performance at Nationals, he skated to Lady Gaga's "Poker Face" -- in a costume he designed himself.

And yet, despite his undeniable flamboyance, Weir's also maidenly coy about his sexuality, telling the New York Times that "There are some things I keep sacred. My middle name. Who I sleep with. And what kind of hand moisturizer I use." It's nobody's business, to be sure, although frankly if you're dressed up in a black-and-pink corset and declaring "I felt very diva tonight," it's a good bet the jig is up.

But while all of the costumes and the PETA-baiting and the apparent eagerness to get people talking about his sexuality may make an intriguing figure, none of those things can make anybody a great figure skater. And that, going into Vancouver, is the big question. Four years ago, he placed fifth at the Torino Olympics, and the last of his three wins at the U.S. Nationals was in 2006. His  recent bronze there was an improvement from recent years past, but the 8th ranked skater in the world frequently seems more comfortable as a self-promoting "Pop Star on Ice" reality TV star than an aspiring gold medalist. And it's that showbizzy, glam-dappled, fame-hungry persona that brought him under fire for being frivolous. Even in a sport that is the world's greatest supporter of the sequin industry, Weir seems too much, especially when viewed in direct oppostion to his dapper, hetero, more appropriately masculine rival Evan Lysacek.

So what does Johnny, a man who's nearly quit skating outright, really want, anyway? To be Gaga on blades or taken seriously as athlete?

Because Weir seems to be confident that he can be both – it's the critics who see his path as a battle between "glitter and gold," the ones who snicker at his disco shtick, who have a problem. It's Weir who told the Los Angeles Times last year that "What I am hoping to see come out of the success of the American men in the past several years is that we get the respect we deserve, the respect of a real athlete, [so] we aren't thought of as just the boys that are doing the girls' sport."

Maybe nobody that cheeky really can ultimately triumph within an institution as staid as the Olympics. And maybe, for all his graceful moves, he's not powerful or innovative enough in his technique to be a true champion. But if he doesn’t get a medal in February, it won't be because he doesn't take himself or his sport seriously. And after getting that mani/pedi with him, ESPN's Jim Caple praised Weir by noting, "Figure skating requires a level of strength, balance and agility that few other athletes can match…. It isn't about what he wears on the ice, it's about what he does on the ice."

In the end, that's all that matters. Nobody ever said you can't have the eye of the tiger even if you're dressed like a swan. And what Weir does on ice is utterly unique, often outrageous, and always compelling. He's an athlete and an entertainer, a serious competitor who leaves a devastating trail of glitter in his wake. Johnny Weir, we love you so much, we're going to pee a little bit.