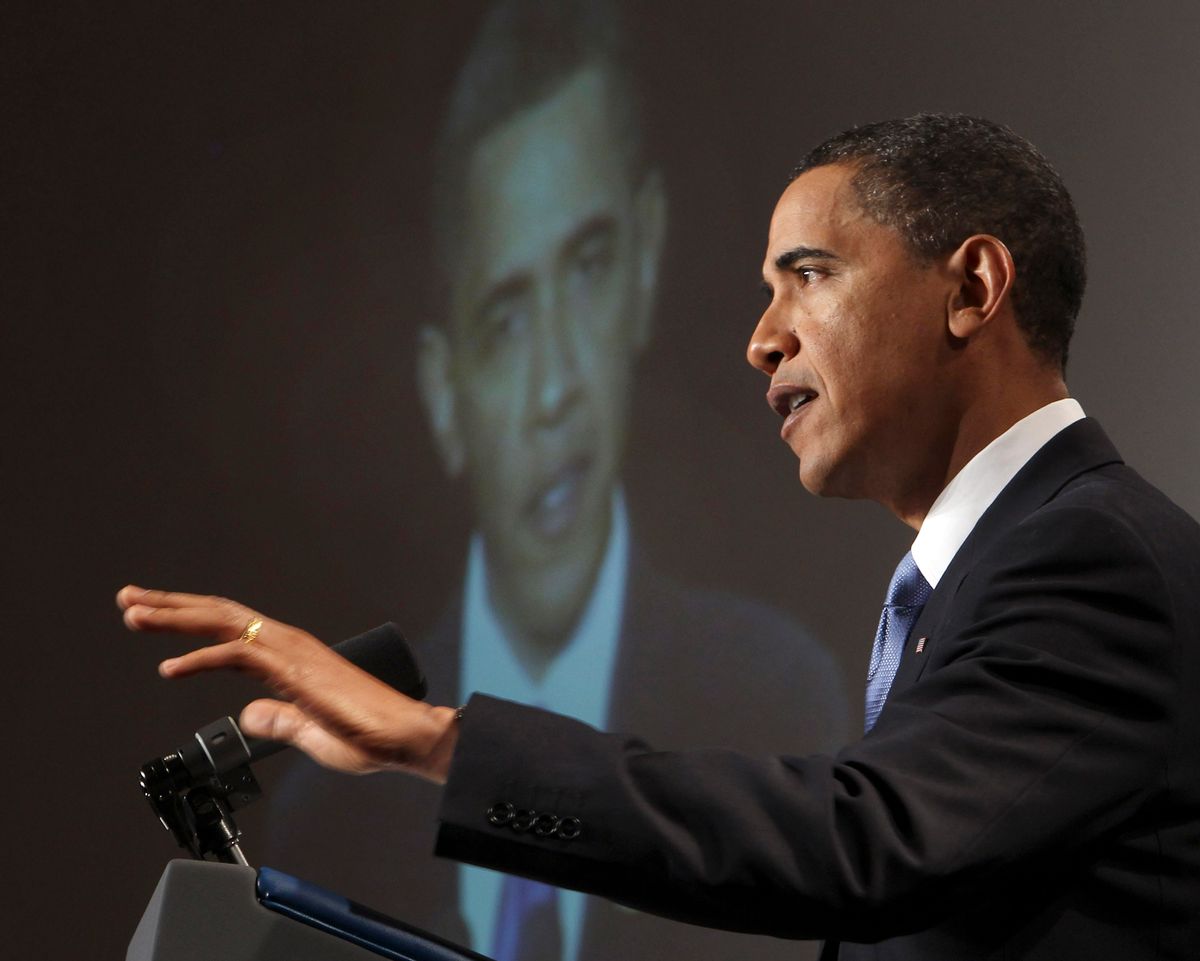 Before President Obama started speaking to the House Republican conference's retreat in Baltimore Friday, the GOP presented him with a little book, one that wrapped up all of the policy ideas they've had since he took office that have languished. It had a catchy title: "Better Solutions." The pamphlet may not be an ideal blueprint for governing -- it only takes 30 pages to wrap up everything from economic stimulus to national security to financial reform -- but, as it turned out, it did make for a pretty good prop.

Which Obama demonstrated about an hour into what was easily the most entertaining program C-SPAN (or any cable news network, really) has aired in a long time. "You say, for example, that we've offered a health care plan, and I look up -- this is just [in] the book that you've just provided me, 'Summary of GOP Health Care Reform Bill,'" Obama said, casually flipping through the book as Rep. Tom Price, R-Ga., stood by. Price had demanded the president tell Republicans how they should answer constituents who don't like the way the White House says the GOP hasn't offered any ideas. So Obama played it deadpan. '"The GOP plan will lower health care premiums for American families and small businesses, addressing America's number one priority for health reform.' I mean, that's an idea that we all embrace. But specifically it's got to work."

Two days after his feisty State of the Union speech, Obama's trip to the retreat started off slowly, with a speech that could have worked almost anywhere with only a few edits ahead of time. And then the question-and-answer session got started, and the event turned into a spectacle, the kind of thing that hasn't been seen in American politics in years -- and probably won't again, once the people responsible for putting it together go back to look at the video. (Which is too bad, because NBC does have an opening for a 10 p.m. show, and this was a lot more watchable than Leno.) Rarely has his administration done such a good job of bluntly underscoring the differences between what Obama wants to do and what Republicans would prefer if they had power. The president was funny and disarming, but he defended his policies fiercely, and he tiptoed up to the line of calling Republicans liars to their faces.

"We've got to close the gap a little bit between the rhetoric and the reality," he said. "I'm not suggesting that we're going to agree on everything ... but if the way these issues are being presented by the Republicans is that this is some wild-eyed plot to impose huge government in every aspect of our lives, what happens is you guys then don't have a lot of room to negotiate with me. I mean, the fact of the matter is is that many of you, if you voted with the administration on something, are politically vulnerable in your own base, in your own party. You've given yourselves very little room to work in a bipartisan fashion because what you've been telling your constituents is, 'This guy's doing all kinds of crazy stuff that's going to destroy America.'"

The ironic, detached style and professorial wonkiness that has sometimes made it hard for Obama to connect on a visceral level since he took office worked perfectly in Baltimore. And what could have been a dangerous event politically, with Republicans riding high in polls and Obama's agenda on its heels, turned into a presidential seminar, instead. He ridiculed a year's worth of Republican talking points on the stimulus: "The notion that I would somehow resist doing something that cost half as much but would produce twice as many jobs -- why would I resist that? I wouldn't ... It doesn't make sense if somebody could tell me, 'You could do this cheaper and get increased results,' that I wouldn't say, 'Great.' The problem is, I couldn't find credible economists who would back up the claims that you just made." When Rep. Mike Pence tried to push him to commit to "across the board tax cuts," Obama pointed out that the stimulus plan did cut taxes for millions of Americans -- but he couldn't resist twisting the knife a bit. "What you may consider across-the-board tax cuts could be, for example, greater tax cuts for people who are making a billion dollars," he said, tying his answer into the Democratic effort to paint Republicans as friends of the rich without blinking. "I may not agree to a tax cut for Warren Buffett. You may be calling for an across-the-board tax cut for the banking industry right now. I may not agree to that." He mocked the GOP for voting in lockstep against the stimulus bill, then trying to take credit for projects it funded: "A lot of you have gone to appear at ribbon cuttings for the same projects that you voted against." Sixty-eight of them, to be exact, according to the Democratic Congressional Campaign Committee.

GOP aides only agreed at the last minute to air the questions, and the lack of political polish made it seem like a freewheeling U.S. version of Britain's prime minister's questions. But on TV, the event played even more one-sided than it probably was in real life. Except Pence, who was on the stage with Obama, the other questions all came from disembodied voices in a dark hotel ballroom. Which worked all right for Republicans like Rep. Shelley Moore Capito of West Virginia, who basically just lobbed a softball about the economy. But when others tried to push Obama, the setup only helped him bat away their questions as they flew out of the darkness.

"What were the old annual deficits under Republicans have now become the monthly deficits under Democrats," said Rep. Jeb Hensarling, R-Texas (who Obama kept calling "Jim," for some reason). "You are soon to submit a new budget, Mr. President. Will that new budget, like your old budget, triple the national debt and continue to take us down the path of increasing the cost of government to almost 25 percent of our economy?"

The president laughed. "Jim, with all due respect, I've just got to take this last question as an example of how it's very hard to have the kind of bipartisan work that we're going to do, because the whole question was structured as a talking point for running a campaign," he said. "When we came into office, the deficit was $1.3 trillion. $1.3 trillion. So when you say that suddenly I've got ... a monthly deficit that's higher than the annual deficit left by Republicans, that's factually just not true, and you know it's not true."

The whole thing basically went like that: Republican asks obnoxious question rooted in Glenn Beck-ian talking points; Obama swats it away, makes the questioner look silly, and then smiles at the end. It got so bad, in fact, that Fox News cut away from the event before it was over. Democratic operatives around Washington watching it had pretty much the same reaction: "Where the hell has this guy been?" One source said GOP aides probably wished they'd spoken to John McCain "about what happened to him in the presidential debates" before they broadcast the event. "It's quite a show," a White House official said, apparently going for the same deadpan tone the president was.

Republican aides tried to argue that Obama was struggling to get past his initial talking points, but that was a pretty desultory attempt at spin. By the time Obama was done, and had stayed about 30 minutes past when he was scheduled to leave, Republican leadership was ready to get him out of the room. One GOP lawmaker asked for one more question, and as Obama started to say he was out of time, Pence jumped in, too: "He's gone way over." And with that, Obama took his booklet of GOP policy proposals and left the room -- in much better political shape, possibly, than he was when he walked in.

Watch the question-and-answer session here, if you missed it -- or if you just want to see it again: