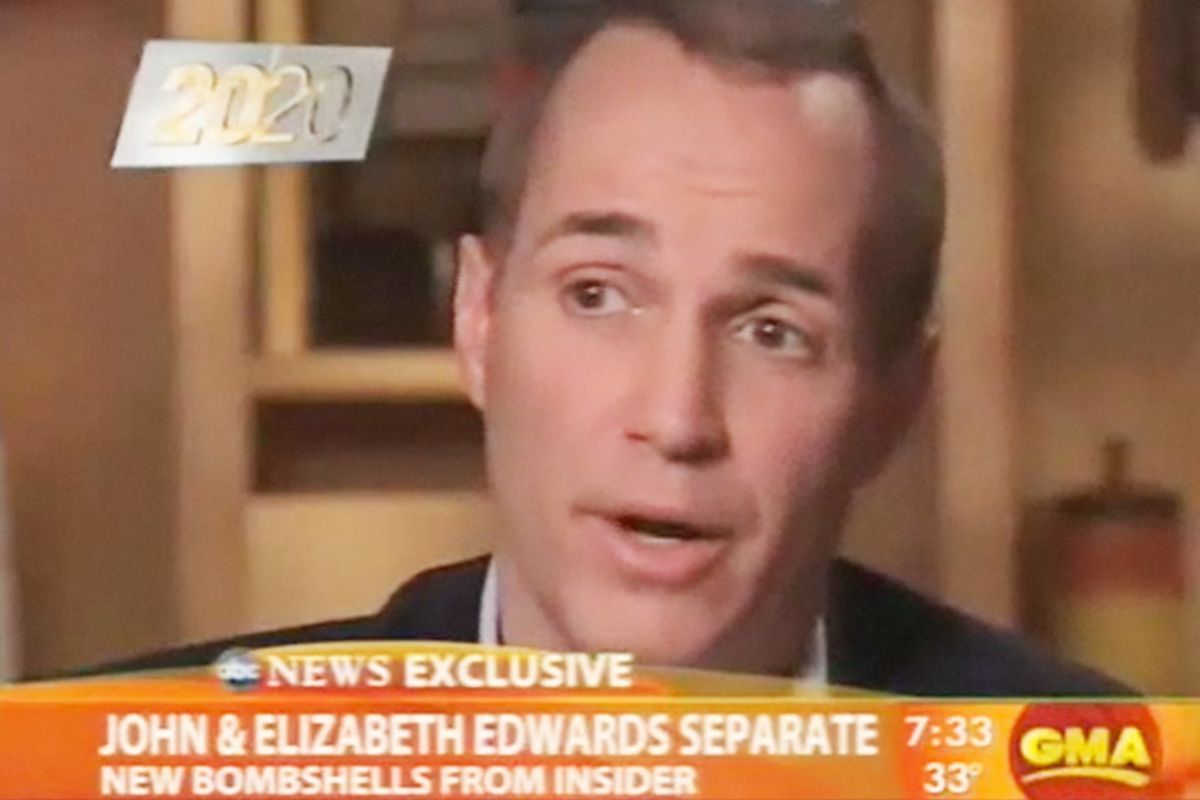 Speaker 2: "I fell in love with him ... I truly believed that we were going to do great things, and he was my ticket to the top ... I became his sole confidant."

Given the crush of recent news coverage, you won't have any problem believing the first speaker is John Edwards. Your task now is to figure out the second speaker, who is also the person to whom he directed the aforementioned remarks. Is it:

B) Mother of most recent child Rielle?

As anyone who sat through last night's "20/20" soft-pornathon can attest, the answer could very well have been A or B, but it is in fact C.

And maybe that's everything that need be said about the quasi-erotic and not-so-quasi-erotic ties that bind political leaders to the young men who champion them and sacrifice their egos for them and work 16 hours a day for them, and even their example pales alongside that of Andrew Young, who pretended to be the father of his boss's mistress's child despite already being the married dad of three kids. And who, to keep that deceit alive, actually dragged his family across the country with the mistress in tow and paparazzi snapping at their asses the whole way.

War-scarred Bob Woodruff was the correspondent assigned to this tale of staffer gone mad, but wouldn't the job have been better handled by George Stephanopoulos? Who, like Young, knew a thing or two about mopping up the sex spoor of charismatic bosses? How easily they would have bonded over man-tinis at the Matchbox, comparing their respective exit strategies. Unkind memoir? Check. Moral rearmament? Check.

But with Woodruff in the interviewer's seat, the whole thing played out like the hoariest Victorian melodrama. Meet John Edwards, millworker's son, champion of "One America." Meet ailing wife Elizabeth, rising from her deathbed to put her husband in the White House. (Anyone who still believes "20/20" is capable of journalism had only to look at the computer-induced tears welling up from Elizabeth's still photos.) Meet evil temptress Rielle Hunter -- not her original name! -- using New Age wiles and Internet familiarity to seduce Edwards under the guise of being his "videographer."

And now meet Andrew Young, the "little known but loyal aide" aspiring now to disloyalty and great renown through the publication of his tell-all book, "The Politician." Not to begrudge Young his royalties, but you'll save yourself a few bucks and a few hours by committing the following allegations to memory.

• Edwards and Hunter's favorite song was "Steady As We Go" by the Dave Matthews Band, and they made love in Elizabeth's bed while she was gone.

• Edwards tried to arrange a fake paternity test that would absolve him of being the father of Hunter's child.

• Hunter, heavily pregnant and on the lam with Young and his family, rejected room after room at a Hollywood, Florida, hotel because each one lacked "the right energy." She settled finally on the penthouse suite.

• Elizabeth, still under the impression that Young was the father of Hunter's baby, left him the following phone message: "You and your concubine and your entire family can stay out of our lives."

• Politicians and their spouses still leave messages and record acts that can be played back later.

Which brings us to, oh yeah, the sex tape, ticking like a dirty bomb beneath the whole "20/20" episode. According to Young, the tape was made just a couple of months before the 2008 Iowa Democratic caucus, and it shows a "visibly pregnant" woman wearing Hunter's jewelry and having intercourse with a man -- well, here it's worth quoting Young's revealingly prim description: "I can't speak for the other body parts, but it's definitely [Edwards'] face."

Could the North Carolina senator have been so stupid as to record his own extramarital sex? (Not even Bubba went that far. That we know of.) Would his lover have been so scatterbrained as to leave it in a house she shared with Young and his wife?

Barring any viral outbreaks, we have only the word of the chastened Youngs, whose remorse came chiming out like church bells at the end of their "20/20" pilgrimage.

"Are you sorry?" nudged Woodruff.

I was a bit sorry, too, to have lost an hour of my life to them. And I was left to ponder why we still care so much about the sexual misconduct of a politician who was not even a heartbeat away from the presidency. Or the vice-presidency. Or the ambassadorship to Burkina Faso. Why does this story have such hellacious legs?

Is it because no one has been willing to stay in character? Edwards began as a rather asexual, grinning millionaire populist; he's now an oversexed hick, searching for grace in the wilderness of Haiti. The saintly Elizabeth, bearing her cross through 14 stations of Oprah, is now, thanks to the deconstruction of Mark Halperin and John Heilemann, a staff-terrorizing harpy flashing her mastectomy scars. Rielle Hunter, emblem of a love so lowly that Elizabeth dared not speak her name, has subsided into a silence that, in the context, looks suspiciously like dignity. (Except that she's now obtained a court order requiring Young to turn over all photos and videos belonging to her.)

Then there's the child. A very young girl named Quinn, who deserves a much better welcome into the world than she's received.

And I can't help but feel that this whole fetid business deserves better. The ideal interpreter, in my mind, is not "20/20" or the National Enquirer (which first broke the story) or the New York Times editorial page but a sensitive novelist on the order of Curtis Sittenfeld, who can roam through the hidden psychic corridors and explore scenarios that our current journalistic and political discourse can't accommodate.

The possibility, for instance, that John Edwards never believed he could be president and never particularly wanted to be. That he genuinely loved his wife -- even as he was sleeping with another woman, even as he was imagining a life after his wife's death. That he may one day cherish his youngest daughter more than anything else in his shrinking world.

In the absence of direct testimony, none of this can be posed as anything but questions. But it's safe to say a sex tape is the last place to look for answers.