The machine that will replace kitchens ... and cooks 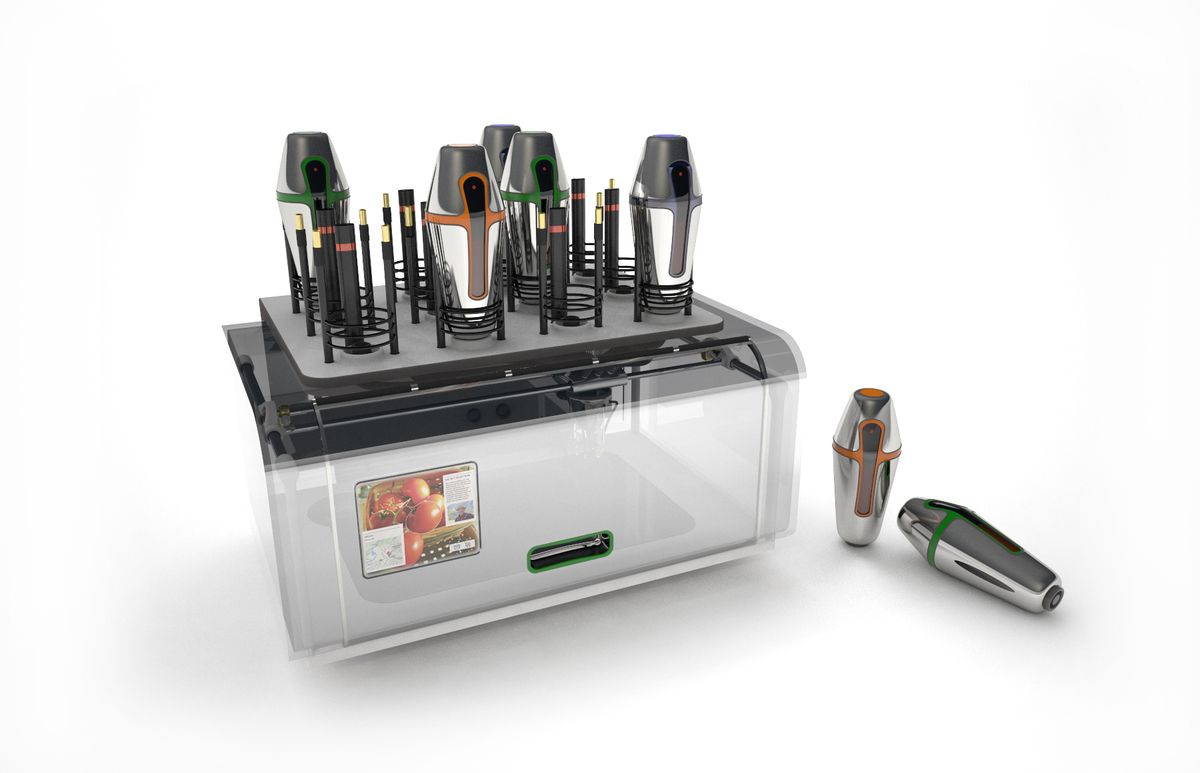 A rendering of the Cornucopia food printer.
--

A few weeks ago, a mysterious food-making machine called the Cornucopia started making waves around the Web. A project by MIT graduate students Marcelo Coelho and Amit Zoran, it seemed like the fulfillment of our wildest Jetsons-inspired fantasies: A machine that makes food -- nearly out of thin air, with no cooks needed -- at the press of a button.

We're not talking about a machine that can slice, dice and cook on its own. We're talking about a machine that can actually make food materialize -- in whatever size, shape and flavor you want -- without your even going to the grocery store. As posted on its MIT Web site, the Cornucopia is a three-dimensional printer for food that looks like a small portable grill, with an attachment of multicolored metal canisters and, according to the project's Web page, tubes and fixtures that can pipe, extrude, heat and cool ingredients to create dishes from scratch. As the blog Engadget claimed: "It may be the next major revolution in food preparation." A Web site called Coolest Gadgets called it "the food of the future."

Too bad the machine doesn’t actually exist. What many bloggers missed is the fact that the Cornucopia is still only a "concept design" -- an idea with a digital rendering, and not much more. Amit Zoran writes via e-mail that, although the pair have worked on some "applied tests and controllers," the machine "isn't much more than sci-fi." But, as the Internet hype shows, it's a fantasy that holds broad appeal -- and, given some recent advances in technology, may be more feasible than you'd think.

In recent years, 3-D printers and scanners -- machines that create digital models of objects, and then build them on the spot in three dimensions using a special kind of printer -- have become smaller, more user-friendly, and more widely used. They can now been used to create television and car parts, replicas for museums, 3-D sculptures -- and, in some cases, food.

In 2007, a group called Evil Mad Scientist Laboratories created something called the CandyFab, a 3-D printer that creates elaborate shapes out of sugar. The CandyFab is a DIY project -- it's open-source, uses recycled material, and costs less than $ 500 to produce -- and works by fusing together layers of sugar. The machine prints one two-dimensional design, then prints another design on top of it, fuses them -- and continues until a three-dimensional shape emerges. Among the project's accomplishments: Printing a gigantic sugar screw, and creating beautiful mobius-strip-like sculptures.

And in the past few months, Dave Arnold, the director of technology at the French Culinary Institute, has been experimenting with a 3-D printer called Fab@Home. The machine, which is on loan from Cornell University, creates three-dimensional objects by discharging materials from two 10mL syringes (meaning the ingredients used have to be in homogeneous paste form, and the final product can't be any bigger than a pound of butter).

The Fab@Home can create highly intricate shapes on the inside of foods, and so far he’s used the machine to create, among other things, multilayered meatballs ("essentially a filling inside a filling"), and small space shuttles made out of scallop paste. As he explains on the FCI's blog, he'd like to be able to create "little food creatures that move under their own power," and he told me over the phone that he wants to make a dish using "alternating layers of paste, including fibers like meat" that would be too difficult to make by hand.

But the experiment so far hasn’t lived up to Arnold’s hopes. "I want to get something here that’s valid from a culinary standpoint. We want to try to find an application where the food we're making is actually better than any other technique we can use," he says. Much of what he’s produced thus far is more easily made using other techniques -- especially on an industrial scale. (It's much faster to create 1,000 scallop-paste space shuttles using a mold than it is to print them out a 3-D printer.)

Clearly, a number of obstacles will still have to be overcome before a machine like the Cornucopia  can become reality. Existing fabricators can't heat, season or bake any food (much less create a steak dinner from scratch), and, from a cultural standpoint, the idea of a 3-D printer runs counter to some of the major trends in American eating -- which are emphasizing fresh, locally grown, minimally processed ingredients. That said, it's not hard to imagine 3-D printers being used in the creation of manufactured foods, like custom high-end candy or chocolate, in the near future.

But even if the Jetsons experience becomes reality, claims Arnold, it may not be a good thing for American eaters. "For me, the entire idea of reducing the eating experience to a printout seems bizarre," he says. "If you actually think you’re going to print out all of your food, you don’t like food."