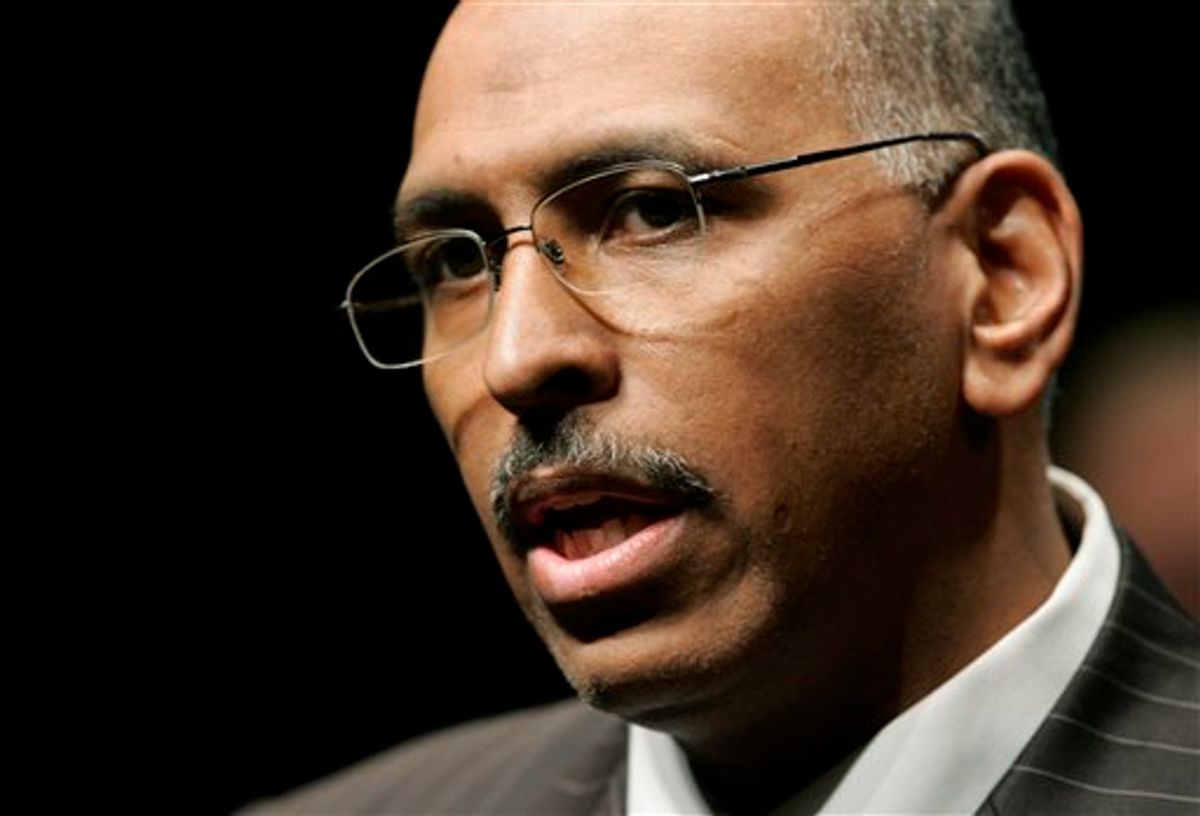 FILE - In this April 16, 2009, file photo, Republican National Chairman Michael Steele answers a a question during a news conference at a fundraising dinner in Evansville, Ind. Despite a flurry of missteps that have drawn criticism in Washington, Steele still enjoys the support of many state party chiefs, grass-roots activists and, most importantly, Republican National Committee members who hired, and can fire, him.(AP Photo/Darron Cummings, File) (AP)
--

If there’s one thing the people of this country want to see in the 2012 presidential election, it’s some off-the-hook campaigning. Yes, whether they live in urban hip-hop settings or suburban ones, the American people are crying out for Republican National Committee Chairman Michael Steele.

Asked at the GOP’s winter meeting about whether he might run for president next time around, the chairman of the Republican National Committee replied, "Come on, don't ask me that." (ABC News, which seems to think the question is not only sensible, but "inevitable," has the story.)

Steele continued, "In all honest-to-good seriousness, that is such silly Washington talk. It's just not even on my mind."

Not convinced? Because he’s not done yet.

Let me tell you where my head and heart are. I'm a guy who thought it important to say, "Put me in coach." And when I help the party return to a governing majority, a stronger GOP, a party that really understands what it's about and what it believes in and is willing every day to go out there and fight for it.

So, that’s a maybe? Looks like you won’t rule it out?

Steele’s three rounds of non-denial before getting to "no" are classics of the genre. He wants the reporter to look absurd for pressing him on it -- and in fairness to Steele, the idea of him as president is absurd -- but he’s the one who is at obvious pains to keep the idea in play.

Or, as he told CNN last year when asked if he’d ever thought of running, "No. I’m telling you. I’m looking at you in the eye honestly and telling you. Without blinking, without hesitation. Straight up."

Asked the interviewer, "Would you consider it?"

I’d consider it if the opportunity were there and it was right. But, you know, God has a way of revealing stuff to you, and making it real to you, through others. And if that’s part of the plan, it’ll the plan … You cannot plan this. There are too many moving parts to plan this … I would think about it.

Remember, this is the guy who furiously glad-handed for his job, then claimed a year later not to have asked for it. So if American voters are looking for a president who won’t exactly ask for the tough job, but will accept it if it's thrust upon him -- well, put him in, coach.