Salt to taste: A doctor's take on sodium intake 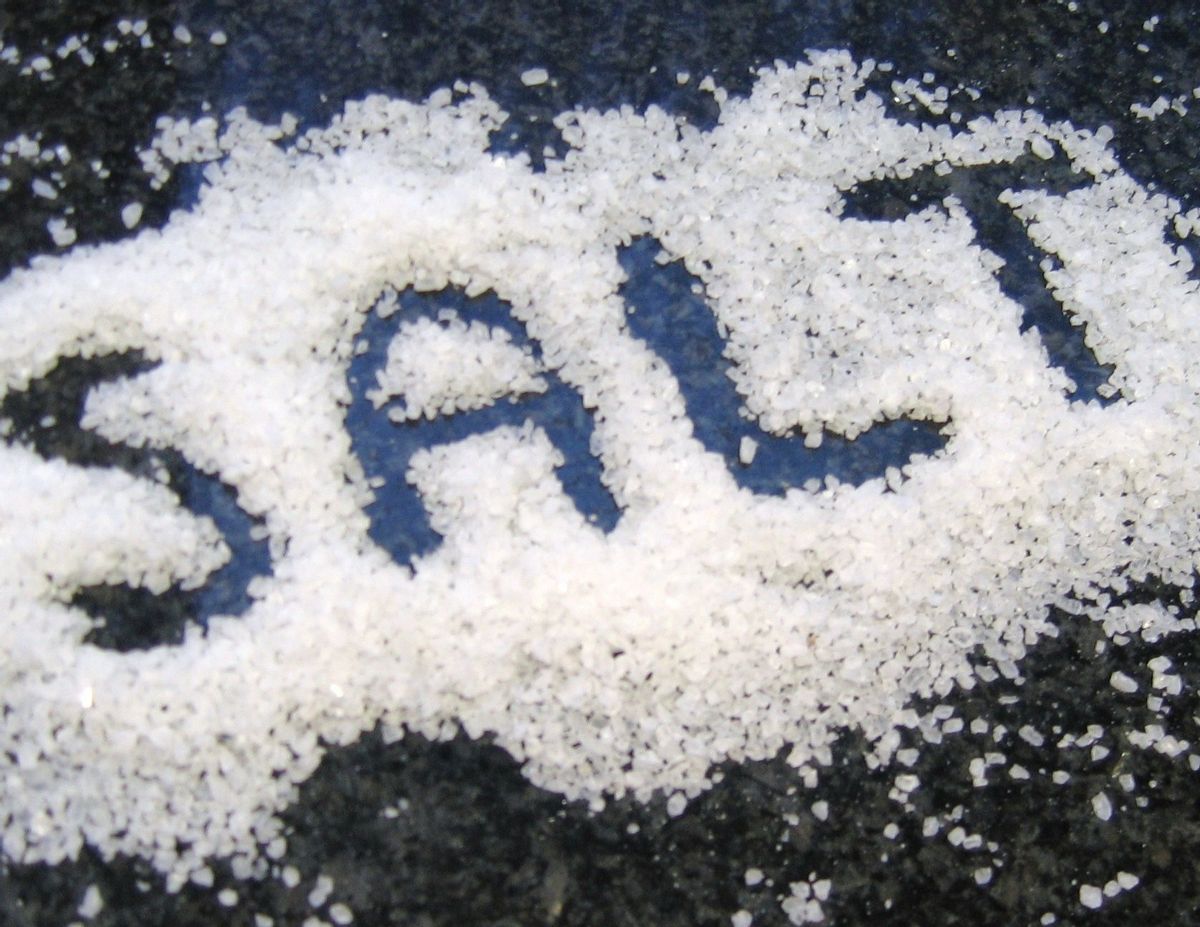 Following up on my post a couple of weeks ago defending the use of salt at home -- ironically in support of campaigns to reduce our sodium intake -- we present a post by Ayala Laufer-Cahana, M.D., elaborating on the medical science on the matter. A version of this story first appeared on her Open Salon blog. -- Francis Lam

Salt runs in the veins of language. There are reminders everywhere of salt's former glory. The word "salary" is derived from salt (Roman soldiers were paid in salt), and salt is at the root of "sauce," "salsa" and "salad."

Ancient wars were waged over the control of salt.

Today, a modern war on salt -- salt reduction -- is looming in the horizon. And for good reason.

While salt is a dietary mineral we can't live without, most of us take in two or three times the daily recommended upper limit of salt. Extra salt is typically sneaking into our meals unnoticed through processed and restaurant foods -- and too much salt threatens the health of many people.

Recently, New York City's Mayor Michael Bloomberg announced an initiative encouraging food manufacturers and restaurant chains to reduce salt in their products by 25 percent over the next five years.

His call joins the voices of many health advocates: For example, in 2007, the American Medical Association (AMA) published a report calling for a major reduction in the salt content of processed and restaurant foods. They've been urging the FDA to revoke salt's "generally recognized as safe" classification and to develop regulatory measures that limit the amount of sodium used in processed and restaurant foods.

But let's start with a few words of respect for salt, because I'd hate to see salt described as the new villain, on par with cigarettes and trans-fats.

In defense of salt

Like anyone who loves food and spends lots of time cooking, salt is one of my (little) friends. Salt is the primordial condiment -- it is absolutely essential to cooking and flavoring. Salt enhances and modifies other flavors and is indispensable in the traditional preparation of many foods, including bread, cheese and pickles.

Salt also is an essential mineral that our body absolutely needs to function properly, albeit in very small amounts. Sodium is needed for fluid balance, nerve transmission and muscle function; it helps many organs work properly.

Our fondness for salt is probably innate, and has served us well as a species. Salt is an essential nutrient that was very rare until modern times, so having a biological cue to seek salt was a good thing. However, the preference for certain levels of saltiness is acquired and isn't fixed. Repeated exposure to higher levels of salt habituates our taste receptors to seek saltier foods, which means the saltier the food we eat, the saltier we want it to be.

How much salt do we need?

Chemistry time: Table salt is sodium chloride, a combination of one chlorine atom for each atom of sodium. Every gram of salt is 40 percent sodium. (The conversion formula of sodium to salt is milligrams of sodium x 2.5 = milligrams of salt.)

The Dietary Guidelines for Americans recommends we consume "less than 2,300 mg (approximately 1 teaspoon of salt) of sodium per day." For African-Americans, older people or people with hypertension the advice is to consume no more than 1,500 mg of sodium per day.

But in terms of what our bodies require, there's a far lower limit: Unless we're running in sweltering heat we need only about 500 mg of sodium daily, which is very, very little.

Contrast this with what you'll get in a Burger King Whopper with cheese: 1,450 mg of sodium. And that's in just one part of one meal.

A Caesar salad with grilled chicken at McDonald's packs 1,390 mg of sodium. Dunkin' Donuts' breakfast egg and cheese on a bagel gives you 1,120 mg sodium when your day has hardly begun.

Science in the Public Interest paints a worrisome picture with its sodium chart.

Where's all the extra salt coming from?

Roughly 10 percent of the salt in our diet comes from the salt we add ourselves (the salt we season with while cooking or sprinkle at the table) and 10 percent is naturally occurring. The vast majority of salt -- amounting to about 80 percent of daily intake -- comes from processed foods.

Salt is added to processed foods to achieve a (very salty) taste profile. In many situations adding salt is what makes cheap, un-tasty food palatable. Salt also is added for stability and preservation reasons. But the amount of salt added is clearly above and beyond what's required for the safety and function of the food supply.

The simple math leads to the conclusion that going easy with the salt shaker is hardly going to put a dent in the unhealthy amount of salt in the typical American diet.

It's also hard to trust our taste buds when salt is involved. Some foods taste quite salty because the salt is on the surface, while other sodium-saturated dishes don't taste salty at all because other flavors and textures (namely, lots of fat and sugars) cover up the salt.

The health risks of excessive salt

The amount of salt in modern diets is having a profound effect on our collective health.

Our kidneys generally excrete extra sodium, but this mechanism isn't perfect; too much sodium can cause or aggravate hypertension in some people. Roughly a quarter of Americans have hypertension.

The evidence connecting higher intakes of salt to higher blood pressure is pretty strong, and relies on many types of studies, including studies that neatly take away the possibility that people who eat lots of salt might have other lifestyle and diet variables that cause blood pressure to rise. Studies comparing two Nigerian rural communities, identical in all but the fact that one community had access to a salt lake and the other community did not, showed that higher intakes of salt tend to result in higher blood pressure. Similar studies of the Iranian Qash'qai and Pacific Island communities showed similar results. Several treatment trials have shown that a reduction in salt reduced blood pressure.

High blood pressure is a major risk factor for heart disease and stroke. It therefore makes sense to assume that high salt intake will increase the risk of stroke and heart disease, and studies support this link.

A new paper in the New England Journal of Medicine used computer models to predict the effect of relatively small reductions in salt intake on Americans' health and found that if everyone consumed half a teaspoon less salt per day, there would be between 54,000 and 99,000 fewer heart attacks each year, between 32,000 and 66,000 fewer strokes and between 44,000 and 92,000 fewer deaths. This small change could save from $10 billion to $24 billion in healthcare costs annually!

A call to reduce salt in processed food -- worldwide

Since 80 percent of the salt in the American diet comes from processed food, the effective way to reduce salt consumption is by reducing the -- really high -- salt content of restaurant and processed foods.

In fact, a program quite similar to New York City's proposed one was initiated by the British government in 2003-2004, and has already achieved a 20-30 percent reduction in the sodium content of processed foods, and further gradual reductions are on the way.

Finland has a systematic approach for salt reduction, and foods high in salt carry a high salt warning. Portugal recently approved a law restricting the sodium content of processed foods. The European Union has salt-reduction initiatives under way with reformulation of processed foods as a major priority.

These public health initiatives are a sensible idea, and it's good to see similar efforts finally under way in the U.S.

An editorial accompanying the NEJM article calls for implementing policies to reduce the salt content of processed food, describing these actions as "inexpensive, yet highly effective public health intervention for the prevention of disease."

World Salt Awareness Week (Feb. 1-7) is being observed throughout the world with activities designed to educate people about the benefits and dangers of salt. This is another important step in building our understanding of how salt affects our health.

As we go through the week, we can take these simple steps to monitor and limit our own salt consumption:

Kudos to New York City for once again being the trailblazer in public health; I think we'll be hearing a lot more about salt very soon!