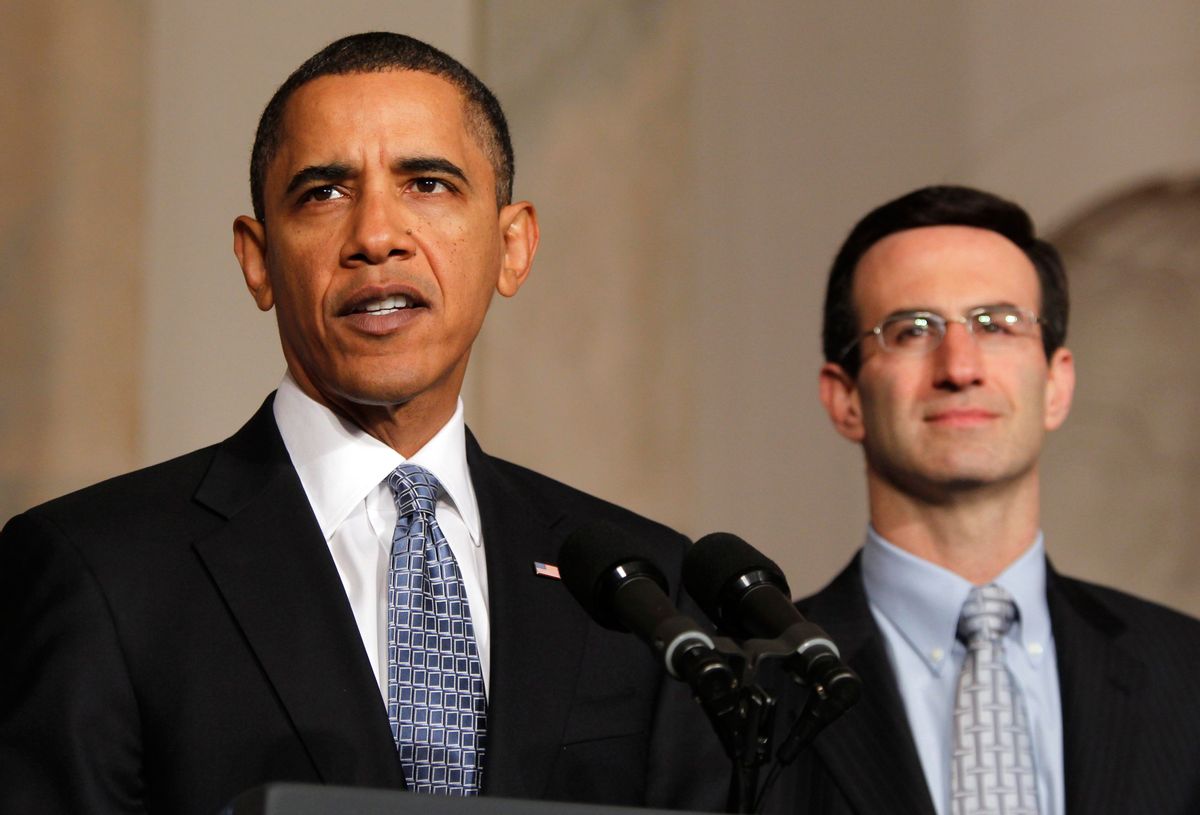 U.S. President Barack Obama speaks about the budget next to Peter Orszag, Director of the Office of Management and Budget (OMB), in the Cross Hall of the White House in Washington, February 1, 2010. REUTERS/Jason Reed (UNITED STATES - Tags: POLITICS BUSINESS) (Reuters)
--

The underlying message as the Obama administration rolled out its proposed budget Monday may have sounded familiar to anyone listening to last year's budget announcement -- or, for that matter, to the State of the Union speech or the president's visit to House Republicans last week. That message, in a nutshell: Sure, the government is borrowing a lot of money. But don't blame us -- blame George W. Bush.

"The fact is, 10 years ago, we had a budget surplus of more than $200 billion, with projected surpluses stretching out toward the horizon," President Obama said, introducing the budget. "Yet over the course of the past 10 years, the previous administration and previous Congresses created an expensive new drug program, passed massive tax cuts for the wealthy, and funded two wars without paying for any of it -- all of which was compounded by recession and by rising healthcare costs. As a result, when I first walked through the door, the deficit stood at $1.3 trillion, with projected deficits of $8 trillion over the next decade." Budget director Peter Orszag picked up the same theme less than an hour later, as he kicked off his own briefing for reporters right after Obama spoke.

All that talk isn't just about placing blame. Facing open rebellion from independent voters who polls show are concerned about the deficit, the administration has decided to remind them why they liked Obama in the first place. The economy has improved enough from where it was a year ago that voters have begun to forget the steps Obama took to rescue it, and focus instead on the price tag for the rescue. But, as the White House took pains to point out before releasing the $3.83 trillion budget, some of the scary deficits the budget projects down the line would have been looming in the future even if the administration didn't spend a dime last year.

There were other scary numbers in the budget release, though. Obama's top economic advisor, Christina Romer, said the White House expects high unemployment for a long time: 9.8 percent at the end of this year, 8.9 percent by the end of 2011, and 7.9 percent at the end of 2012. Which means officials are trying to pull off a complicated maneuver: spend enough money to keep the economy from collapsing again, while trimming enough fat from the budget to assuage concerns about a deficit that would hit a record $1.56 trillion this year.

"We don't want to act too rapidly to bring down the deficit because that would exacerbate the jobs deficit," Orszag said.

So the spending freeze on programs besides defense, homeland security and care for veterans that Obama promised in last week's speech did make it into the budget proposal. But it turns out to be a little less restrictive than advertised, with some programs -- like aid for low-income renters, education and scientific research -- getting increases despite the cap. Officials want to enforce the freeze mostly by shuffling money within departments from programs they don't think work to programs they want to fund. So NASA's plan to go back to the Moon got scrubbed (which will surely come as a relief to Gil Scott-Heron), as did a program that pays states to clean up mines that are already cleaned up. At least one program targeted for elimination may not help the White House in its ongoing negotiations over healthcare -- Obama wants to cut all the funding for the B.J. Stupak Olympic Scholarship Program, established by Rep. Bart Stupak, D-Mich., in honor of his late son. Stupak, of course, wrote the restrictive abortion language in the House healthcare bill. (Bush tried to cut the Stupak program in the past, too, without success.)

But the thing is, those programs will only actually be cut if Congress decides to play along with Obama's proposals. For all the angry talk from GOP lawmakers about how much money Obama is spending, the budget is, essentially, one of Washington's most elaborate kabuki productions. None of what Obama put out Monday is binding on anyone; Congress has to pass its own budget, and then pass 13 individual appropriations bills that actually dole out the money. Obama can veto bills the administration doesn't like, but since Congress tends to wait until the last minute before actually passing them -- the Defense Department spending bill for the fiscal year that began Oct. 30, for instance, wasn't passed until just before Christmas -- the leverage winds up on the other end of Pennsylvania Avenue.

And on Capitol Hill, reactions to the budget proposal were predictable. Democrats mostly praised the president, but there are already quite a few grumbles, particularly from the House, about including the Pentagon in the spending freeze. Republicans, meanwhile, fit the plan neatly into their narrative about Obama the Bolshevik (as the president himself put it on Friday). "The budget the administration released this morning is just more of the same old failed fiscal policies that gave us record spending, record debt and no job growth over the past year," Rep. Mike Pence, R-Ind., the chairman of the House Republican Conference, said. "This course is irresponsible and unsustainable."

That was just fine with the White House, where aides have ratcheted up their efforts lately to remind voters that for all their discontent with Democrats, they like Republicans even less. Cutting spending may sound good as a campaign slogan, but as Obama noted in his debate with the House GOP on Friday, governing requires more than just asserting something as loudly as possible. And so far, many GOP alternatives to Obama's proposals seem to consist mostly of assertions. Which means the drawn-out budget process this election year may wind up being just as much a test for Republicans as it is a test for Democrats.