Defense Secretary Robert Gates today will unveil the administration's plan for repealing Don't Ask, Don't Tell, beginning with a ban on discharging gay service members who are "outed" by third parties.  More than 13,500 gay service members have been discharged since the Clinton-era enactment of that policy, which continued unabated even as America's military has been stretched horribly thin by multiple wars and endless tours of duty.  Ironically, the highest number of discharges came in 2001, when more than 1,000 people were discharged for being gay.  For some strange reason, Michael O'Hanlon of the Brookings Institution was on CNN to opine about all of this today, and this is what he said (h/t Michelangelo Signorile):

Michael O'Hanlon of the Brookings Institute said the real test will be in the barracks, with the rank-and-file members of the military.

"We can talk about this delicately or we can just be fairly direct," O'Hanlon said. "There are a lot of 18-year-old, old-fashioned, testosterone-laden men in the military who are tough guys. They're often politically old-fashioned or conservative; they are not necessarily at the vanguard, in many cases, of accepting alternative forms of lifestyle."

First of all, O'Hanlon sounds like he just stepped out of a 1981 Moral Majority documentary.  Who still talks about sexual orientation being an "alternative form of lifestyle"?  That was always a dishonest and propagandistic phrase -- as though gay people intrinsically lead a different "lifestyle" -- and it's rare these days to hear anyone outside of Jim Dobson and Maggie Gallagher use it.  And the apparent belief of O'Hanlon that there's an inverse relationship between masculinity and acceptance of gay people ("testosterone-laden men who are tough guys") is ludicrous, though, almost certainly, his saying this unintentionally reveals some disturbing psychosexual undercurrents that are driving O'Hanlon himself. 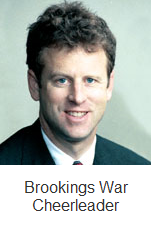 Second, O'Hanlon's views on the repeal of DADT were the same ones cited to oppose racial integration and an expanding role for women in the military (it's not me, but those primitive enlisted men, who will cause problems).  It's also unbelievably disrespectful of the military itself and its rank-and-file, since it assumes that those who join the military are consumed with such uncontrollable bigotry and are incapable of adhering to its policies and dictates.  That, too, seems to say much more about O'Hanlon than the "rank-and-file" members of the military whom he's disparaging.

Finally, what does Michael O'Hanlon know about the military, and why is he -- of all people -- being held out as some sort of expert on these matters?  He's never been anywhere near the military.  He specializes in establishing himself as a "testosterone-laden tough guy" by cheerleading for wars and urging that we send other people off to fight them -- all from the safety and comfort of his Brookings office.  Several months ago, over 100 retired Generals and Admirals -- people who, unlike O'Hanlon, actually understand the military first-hand  -- called for a repeal of DADT so that gay people can serve openly.  Why would anyone believe that someone like Mike O'Hanlon, who relentlessly waves his pom-poms for war while ensuring he never fights them, has anything worthwhile to say on the topic of the military's ability to successfully integrate openly gay service members?

UPDATE:  I'd also like to know whether those who (a) cheerlead for our various wars, (b) oppose the repeal of DADT and (c) are of prime fighting age -- such as GOP Rep. Jason Chaffetz of Utah -- intend to enlist in order to replace the highly qualified, well-performing gay service members who are discharged under the policy they favor?

UPDATE II:  Andrew Sullivan notes that Michael O'Hanlon's brother-in-arms for the testosterone-laden team of war-cheerleaders -- Bill Kristol -- echoed the same arguments today, even going further than O'Hanlon by insisting that homosexuality is inherently incompatible with the superior performance of military duties.

It should go without saying that debates over homosexuality, the military, warriors, masculinity and the like are suffuse with all sorts of complex psychological influences.  But one thing is clear:  in American culture, there has long been a group of men (typified by Kristol and O'Hanlon) who equate toughness and masculinity with fighting wars, yet who also know that they lack the courage of their own convictions, and thus confine themselves to cheerleading for wars from afar and sending others off to fight but never fighting those wars themselves (Digby wrote the seminal post on that sorry faction back in 2005).  It seems that individuals plagued by that affliction are eager to avoid having it rubbed in their faces that there are large numbers of homosexual warriors who possess the courage (the "testosterone-laden tough-guyness") which the O'Hanlons and Kristols, deep down, know they lack.  Banning gay people from serving openly in the military as warriors is an excellent way of being able to deny that reality to themselves.

Stand by what I said: Allowing homosexuals to serve openly is the right thing to do. Comes down to integrity.

I believe he knows more about the military than Mike O'Hanlon and Bill Kristol.  As for O'Hanlon's projection (in both senses of the word) that young, conservative enlisted men will backlash against openly gay service members, the most recent poll shows that 69% of all Americans -- along with 58% of both self-identified "Republicans" and "conservatives" and 60% of people who attend Church at least once a week -- favor "allowing openly gay men and lesbian women to serve in the military."