The Oscar nominations: Trying to please everyone 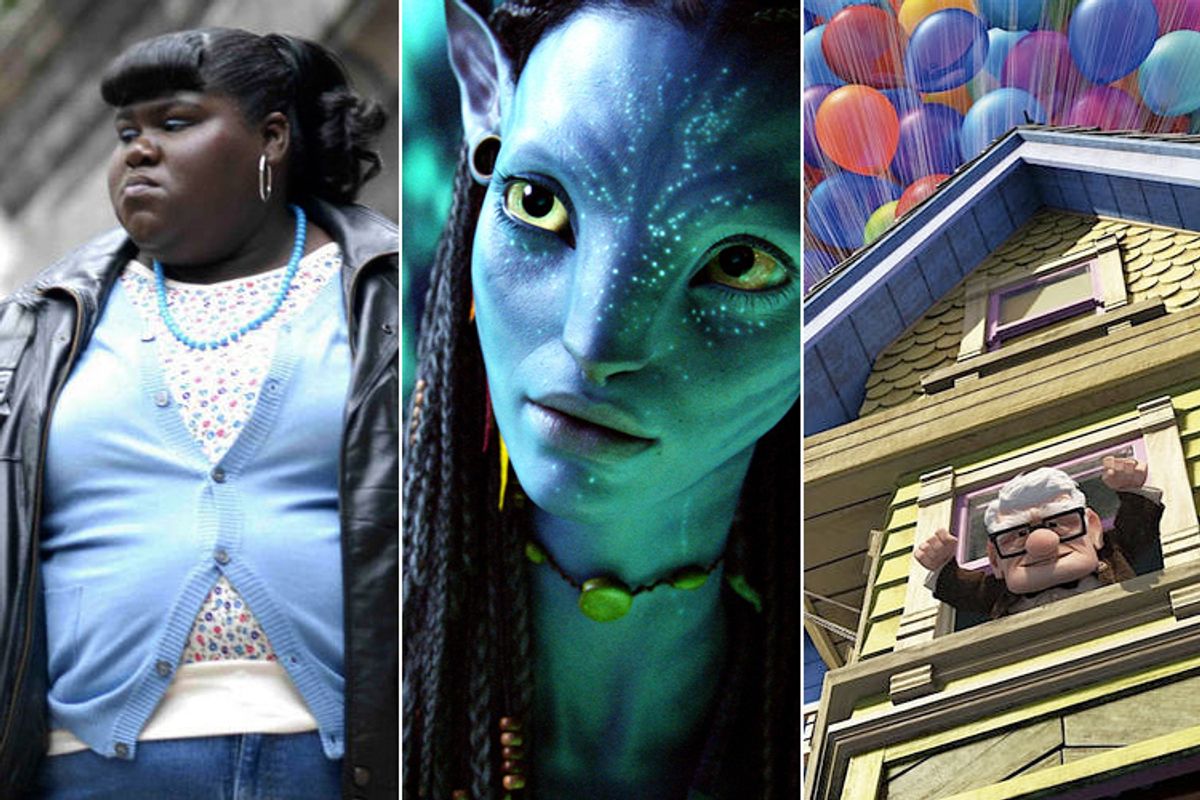 So what was the inflated Academy Awards best-picture category, expanded this year from five to 10 nominees, going to bring us? More populism or more existentialism? Was it going to open the door to animated films, to fantasy and science fiction, to foreign flicks and low-budget indies -- or just to middle-of-the-road Hollywood sentimentality, calibrated to draw in heartland viewers who've increasingly tuned out the whole Oscar spectacle?

Given the Academy's catholic desire to please all its contradictory and overlapping constituencies, it shouldn't have surprised anyone that the answer was all of the above. And yet, somehow, it did. I think of the five extra nomination slots as the "Dark Knight" apology awards, but this year offered no exact TDK-cognate, i.e., no commercial-critical behemoth likely to be snubbed by the Academy members' peculiar blend of middlebrow snobbery. (Just to be clear: I didn't like "The Dark Knight" much, personally. But that's irrelevant when it comes to the Oscars. Given its alleged seriousness, cultural impact and box-office firepower, a best-picture nom should have been automatic.)

So along with the predictable passel of nominations (nine apiece) for James Cameron's "Avatar" and ex-wife Kathryn Bigelow's "The Hurt Locker" -- and I'm calling the divorce settlement here and now: Jim gets best picture; Kath gets best director -- the Academy spread the love in all directions. Disney/Pixar's "Up" was nominated for both best picture and animated feature. The family-football-Sandra Bullock vehicle "The Blind Side," which has made a ton of money while leaving bicoastal critics in glycemic shock, also got multiple nominations. Lee Daniels' "Precious: Based on the Novel 'Push' by Sapphire" got a best-picture nod along with two major acting nominations. The exquisite British female-coming-of-age film "An Education" was nominated for best picture, in a mild surprise, alongside a fully expected best-actress nomination for its irresistible ingénue star, Carey Mulligan.

In garnering best-picture and best-director nominations for his unspellable and borderline-unwatchable World War II pastiche, Quentin Tarantino becomes this year's winner of the Martin Scorsese Way Too Late award, handed out annually to a director whose more worthwhile work has been largely ignored by the Academy. (Q.T. shared a screenwriting Oscar for "Pulp Fiction" in '95.) In other news, it's mighty peculiar that hardcore New Yorkers like Joel and Ethan Coen have become beloved figures in Hollywood, but there can no longer be any doubt. Their brilliant black-comic fable "A Serious Man" -- a movie that gleefully and maliciously embraces the old cliché about being "too Jewish" for mainstream America -- got a well-deserved nomination. But that surely wasn't the big surprise among the gang of 10.

In a dinner conversation with critics last week at Sundance, we all agreed that one film among the best-picture nominees would be something nobody had expected. I remember a few possibilities mentioned: Wes Anderson's "Fantastic Mr. Fox," Pedro Almodóvar's "Broken Embraces," Steven Soderbergh's "The Informant!" But of course once we'd mentioned them, they weren't unexpected anymore, were they? Nobody brought up "District 9," the sci-fi action-allegory made by South African expat Neill Blomkamp under Peter Jackson's production aegis, which became a surprise late-summer hit. (Dept. of complicated Hollywood dis: The movie made by Jackson's little-known protégé gets an Academy nod, while Jackson's own prestige production, "The Lovely Bones," pointedly does not.)

This year's acting nominations ran remarkably true to form, leaving all the favorites in place: George Clooney and Meryl Streep in the leading roles; Stanley Tucci and Christoph Waltz fighting it out for the evil-guy supporting actor prize, and Mo'Nique all by herself, vacuuming some shelf space in the den for that statuette. Yes, I can hear the grumbling from the cinephile margins: Clooney was better in "Fantastic Mr. Fox" than he was in "Up in the Air"; Penélope Cruz was way, way better in "Broken Embraces" than she was in the musical megaflop "Nine"; the year's best female performance, given by Tilda Swinton in French director Érick Zonca's "Julia," was never even on the Academy's radar. Sure, yes, I agree on all counts. But when Zonca's movies start showing up on the Oscar telecast, winning Oscars, it won't be on NBC or ABC or A&E or any other TV network; it'll be Web-streamed live from the back room of a Hollywood Boulevard liquor store in the middle of the night. Not that there's anything wrong with that! That'll be cool in kind of a different way.

I'll consider the more niche-oriented nominations in due course, but my initial reaction is that the Academy has now avoided total disgrace in the foreign-language and documentary categories for two years running, which is an all-time record. "The Cove" and "Food, Inc." were obvious documentary nominees, but it's a wonderful surprise to see Anders Østergaard's "Burma VJ" on the list. A thrilling and inspiring film largely shot by anonymous contributors inside Myanmar, it documents the doomed popular uprising against the Burmese military junta in 2007 -- truly a one-of-a-kind viewing experience. It's true that French New Wave foremother Agnès Varda's delightful, autobiographical "The Beaches of Agnès" was left out, but you can't call that a shocker.

Instead of the customary blend of cynical and/or sentimental foreign-language glop, this year's Academy list includes at least two films, Michael Haneke's "The White Ribbon" and Jacques Audiard's still-unreleased "A Prophet," that are clearly among 2009's finest examples of world cinema. (I still haven't seen the Israeli-Palestinian collaborative project "Ajami," but I hear it's terrific too.) Any lingering controversies in this category, such as the absence of Italian director Paolo Sorrentino's explosive "Il Divo" or Korean director Bong Joon-ho's "Mother," predate Tuesday's announcement by weeks or months.