Did the first lady mess up by talking about her daughters' weight? 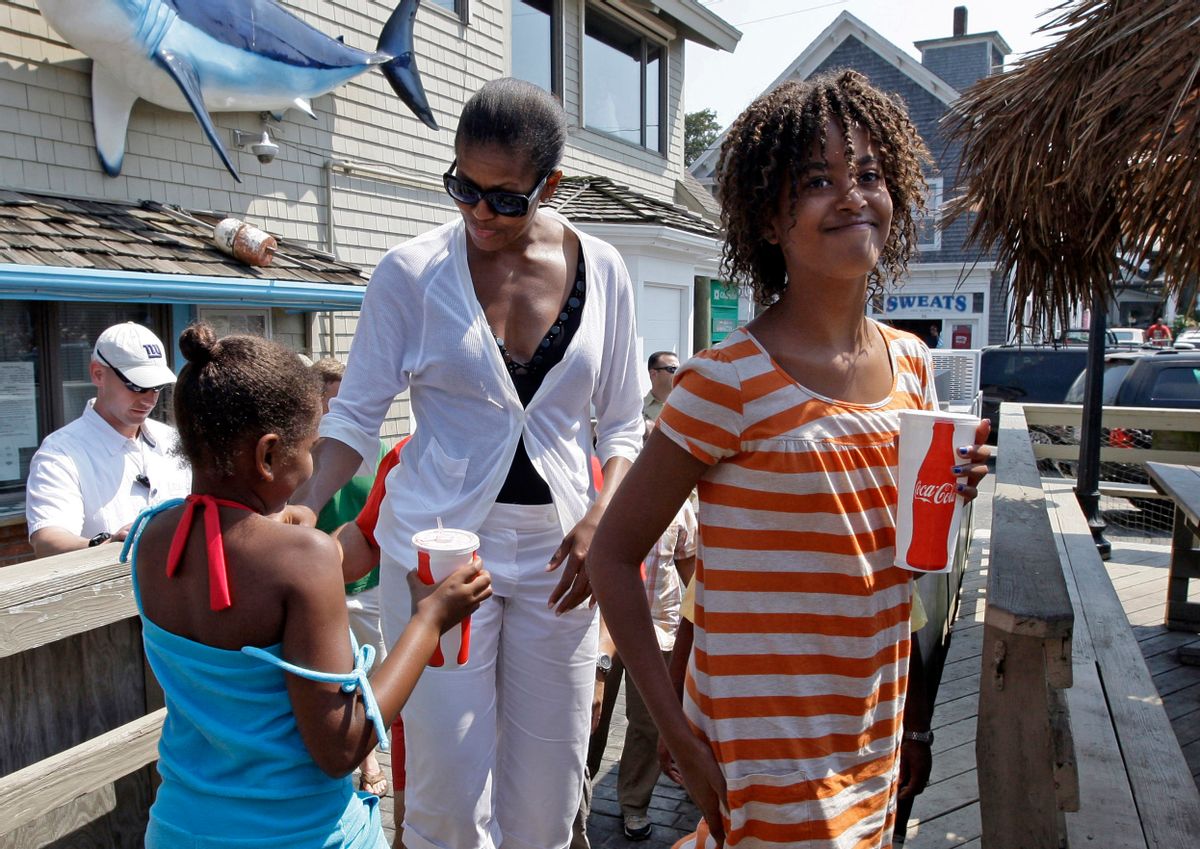 FILE - In this Aug. 26, 2009, file photo, first lady Michelle Obama walks with daughter Malia, 11, right, and Sasha, 8, while they wait to get lunch at Nancy's in Oak Bluffs, Mass., while vacationing on Martha's Vineyard. (AP Photo/Alex Brandon, File) (Associated Press)
--

As she takes up the pressing issue of childhood obesity in America, Michelle Obama seems to have started by putting something in her mouth. Namely, her foot.

As our friends at Jezebel WTFed earlier this week, the first lady kicked off her cause last weekend by telling the world that her own pediatrician "cautioned me that I had to look at my children’s BMI. He was concerned that something was getting off balance. In my eyes I thought my children were perfect," she said. "I didn’t see the changes."

But oh my God, they weren't perfect! Their BMI was off balance!

Now, Mrs. Obama is trying here. She's a real woman who is raising two little girls in a country with a mounting obesity problem and an incredibly fucked-up relationship to body image. She understands our challenges in getting our kids to exercise and eat right, and she wants us to see her family is like our family. So when she stood up and said, "Knowing that you’re going home to an empty refrigerator and kids who are hungry and fussy and not wanting to eat anything you have in mind. All they want is some pizza and some burgers. Right? And you don’t want to argue, you want a peaceful meal. You want everyone to be quiet and just eat," it was like she was looking at every mother's life. But while to the rest of the world she's an accomplished  leader, to Sasha and Malia, she's Mom. And Mom just made an example of their less than perfectness. Lesson here: Parents are so embarrassing – even when they're the first lady of the United States. (Dad's no slouch either. In 2008 he told Parents magazine, "A couple of years ago -- you’d never know it by looking at her now -- Malia was getting a little chubby.")

As it happens, Sasha and Malia have two physically fit, slender parents, so the genetic deck is already stacked in their favor. And while some studies show a correlation between childhood obesity and future weight and health problems, it's not the only thing. Many people, like our president, for instance, go through a variety of childhood fluctuations before settling into their adult body type. I was a lumbering, chubby kid myself -- though my parents were neither of those two things. But my eventual slimmed-down outcome didn't help when I was a little girl and, in my whippet-thin mother's words, had "thunder thighs."

I live in a lower-income, predominantly immigrant neighborhood where the rate of childhood obesity is downright grim. It's a problem that affects everything from future health to academic performance.  Getting kids away from the computer and TV screens, away from the fast, overprocessed foods, is something we can all get behind, but not first and foremost because they might wind up with a higher BMI -- a number that is not the be-all and end-all by a long shot anyway.

The way to instill healthy habits in children cannot involve anything that smacks of critique. Trust me, they've got the entirety of pop culture to make them feel bad about themselves, they don't need our help. We've got to sweeten the deal, so to speak. It's fun to run around! It's fun to help with the grocery shopping and the cooking! We've got to walk the walk ourselves as mothers, in the way we eat and live and keep our damn mouths shut when we feel a wave of criticism about our own or anybody else's body coming on. We've got to similarly zip it about food being "good" or "bad" and let it just be food, because our kids are going to have to spend the rest of their lives eating the stuff. It's not always easy. Believe you me, there are days when my own daughters give me the "you're not fooling anybody" look when I offer them apples for an afternoon snack. But if we don't obsess or fetishize, if we demand better options at the supermarket and support initiatives like Wellness in Schools  and generally bring in more broccoli than corn dogs, it'll be OK. And if after all the running and the cooking and the broccoli and periodic corn dogs, our kids grow up healthy and with a number on a scale or BMI that's somehow different than the ideal one on the chart, that's OK too. Because they're still our kids. And they're perfect.