The incredible expanding noodle, and where to eat it

Hand-pulled to order, served in fragrant soups and monumentally satisfying, here are our favorite bowls 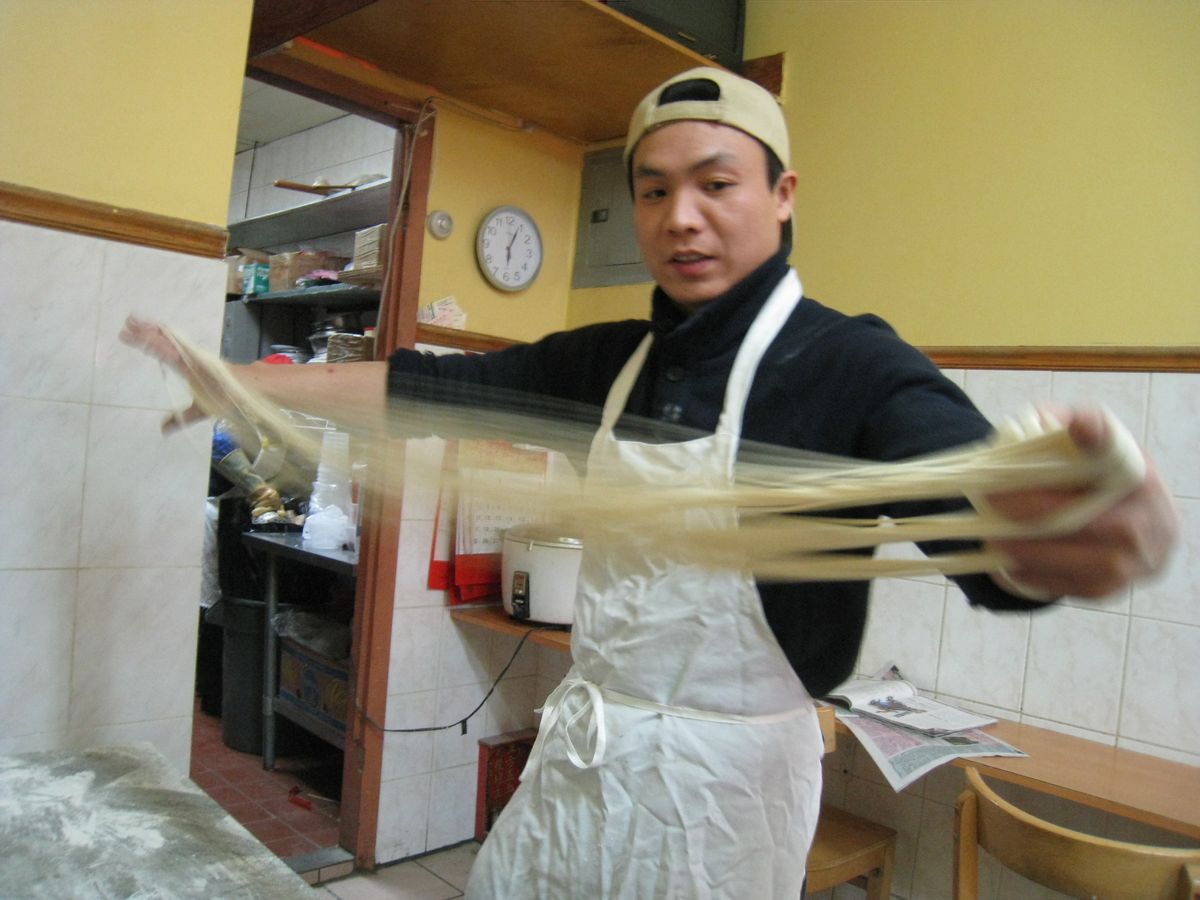 The master at work at Lam Zhou Handmade Noodle
--

I suppose I'm easily entertained, but it's hard to deny that you get a bit of a show with your lunch at the Lanzhou-style hand-pulled noodle shops popping up all over New York's several Chinatowns: You order and a flour-covered cook will wrestle with a snake's-length of white dough, wrap it around his fingers, and, like some elaborate, wheaty cat's cradle, stretch, tug, and fold its way into a bundle of noodles. It's cooking as manual acrobatics: You can watch it over and over and still be surprised at how the dough strands multiply, at how the hands move with such surety.

Of course, these things aren't made for looking, and minutes after the cook casts your hank into boiling water, it comes to you in bowls of nearly boiling soup, deep-tasting and brown with beef to its core, scented with warming spices like star anise and slicks of red chili oil, sporting garnishes and meats of many textures.

Ever since the intrepid Robert Sietsema brought New York's first and most almost-famous of these places -- the excellently named Super Taste -- into food-nerd prominence four years ago, these noodles named for an obscure city smack dab in the center of China have become a bit of a cottage industry here, with nearly a dozen shops specializing in them within blocks of each other. Ready to eat our weight in wheat, some friends and I slurped our way through four remarkable shops, and learned a little about what we were eating and who was feeding us in the process. (Check out the map below!)

Fitting for the elder statesman of the hand-pulled noodle crowd, Super Taste's menu features an extensive essay introducing its specialty to the uninitiated, and placing it in historical context:

It is said they were sold in the streets of Lanzhou as early as Han dynasty and Tong dynasty ... There are four characteristics of genuine Lanzhou Hand-pulled noodles:

1) Clear, which means that soup should be clear

2) White, means that flour must be white with t endon

3) Red, means that hot chili oil must be used

4) Green,  means that parsley, garlic bolt must be fresh and green.

Beef noodles vary in their sizes. They are commonly seen as wide, wider, thin, thinner as well as the side of chive leaf.

If you read past the typos and consider the poetics of the non-native speaker, there is an animating philosophy here, an exacting tradition to be accountable to, and it's not every day one finds what is basically a feeding station with such pride in the story of its work.

But Super Taste has reason to be proud. Its noodles are pleasingly elastic, the broth is clear and deep, and former Gourmet editor and New York Times restaurant critic Ruth Reichl considers its "Beef in Hot & Spicy Soup" fair consolation for jury duty. Still, the finest work here is one of the side orders: steamed dumplings the size of babies' fists, the skins so delicate they're translucent, the filling juicy and porky, the flavor alternating between chews with garlic chives and sweet spices. "Cinnamon!" Charlotte exclaimed, her eyes opening wide. Those dumplings are awesome. I want to date those dumplings.

Plus, despite the fact that this mere slip of a closet of a restaurant serves everything in plastic bowls, Super Taste has an environmentally friendly paperless ordering system! It involves a woman screeching orders back into the kitchen -- directly at sitting-ear-level -- in a voice that can sandblast the sides of buildings. Eating those dumplings with this unearthly wail erupting behind me, I haven't been so horrified and excited at the same time since I tried to get into industrial music in high school.

According to Eileen Yin-Fei Lo, one of the great teachers of Chinese food and the author of "Mastering the Art of Chinese Cooking," all that slapping and working of the dough is to get the proteins in the flour activated and aligned. "The noodles should be very strong but not tough," she told me, and at Kuai An, they have not only integrity but a velvety feel, as if they were drawing the broth to themselves.

Kuai An is a happy-making place, and not just because halfway through our meal I saw employees gather sweetly around a freshly opened durian in the kitchen with smiles usually reserved for birthday cake. The House Special noodles floats hunks of duck, two forms of whistle-clean beef tripe and the intense freshness of celery leaves in a broth that trades clarity for meaty complexity. Gilding the lily is what my mother calls a "wallet egg," an egg fried so ferociously that it sits on the top of the bowl like a UFO covered in gold lace, so hot it's literally still crackling, the outsides crisp and chewy, the yolk cooked through and floury, mimicking the satisfying roughness of the noodles. I should warn you to eat the noodles quickly, since the hot soup can waterlog them after a while, but I don't imagine they'll last that long.

It was also at Kuai An that I learned a fascinating footnote to culinary history. One bowl of noodles in a duck and taro soup was gorgeous with the sweet and floral notes of rice wine, and I talked with the server about it. "That is a specialty from Fujian," she said. "We are Fujianese."

"Wait, you're not from Lanzhou?" I asked. Fujian is on the southeastern coast of China, about a million miles from where these noodles are supposed to be from.

"No, we are from Fujian. Our noodle master's teacher was from Lanzhou. All the Lanzhou noodle shops in New York are owned by Fujianese."

This was exactly as shocking as if I'd just found out that all the Texas barbecue I've ever eaten was made by people from Maine.

"Many masters from Lanzhou opened noodle shops in Fujian, so we learned the dish from them and brought it here," she said. And, as shown by the duck and taro soup, they put their own stamp on it too. (Jennifer 8. Lee's "Fortune Cookie Chronicles" has a fascinating chapter on how so many Fujianese have emigrated to become restaurant workers in America that whole towns there are deserted.)

Next door to Lam Zhou Handmade Noodle (you know, that whole transliteration thing is never easy) the Chinatown Lumber Co. has a warehouse, where you hear heavy pallets crashing about all day long. But if you're inside the restaurant, the noise will be coming from the corner of the dining room, from the man at the marble-topped table. He pulls, stretches, and, lifting his arms way out to get good leverage, whips the dough down with a certain violence. The slapping sound cracks loud enough to make the unaware jump from their chair, and I began to wonder if that table was put there because the kitchen was too small, or because it was useful in intimidating people. Chinatown can get kinda rough, you know.

Here, the beef brisket soup took me instantly to my childhood. The noodles were silky and strong, the brisket pleasantly chewy, and the broth, on an impossibly cold night, so warming with star anise that it suddenly felt like my odd little childhood could be universally understood.

The pork bone soup is gnawin' food. Instead of bite-size chunks of beef or whatever as a topping, you get a big caveman-style bone, boiled clean, from which to suck the marrow and chew the meat and tendon. It's a primal pleasure for which there is no polite method. The presence of the bone shows in the broth, too, which Charlotte described as being "like a murky pond," with just a touch, a connoisseur's tickle, of barnyard stank. It's so luxurious with dissolved gelatin, so mouth-coating, you just know it gets solid when cold.

Finally, after this most animal specimen, it was a real change of pace to arrive at Tasty Hand-Pulled Noodle, located closer in the older, more Cantonese-speaking part of Chinatown. There are decorations on the walls, helpful picture menus, and a notable dedication to creature comforts like clean floors.

These things made me suspicious. I looked into the kitchen, and the man dealing with the noodles did so in soporific fashion, as if barely able to stand up, much less handle the dough with any vigor. I was even less heartened.

But then the server brought our pan-fried chicken dumplings, which were filled with juice and sang with ginger. Our seafood soup tasted cleanly, magnificently of clams and other things in shells, with yards of wonderfully structured noodles, tender and resilient. The server directed us to be generous in our beef soups with cilantro and chili oil, and she could not have steered us more rightly -- the long-cooked taste of meat and spice lightened with the fresh herbs and the rich slick of hot oil extended through the flavors. My suspicions were confirmed, but in a good way: Like the dining room, these were bowls of a more refined order.

As I left, I saw a man in an elegant wool greatcoat wiping down bowls behind the counter. I'm serious. This is a class joint! The Fujianese makers of Lanzhou-style noodles, it seems, are moving up in the world.

Do you have places that serve this dish near you? Give us your favorites in the comments!