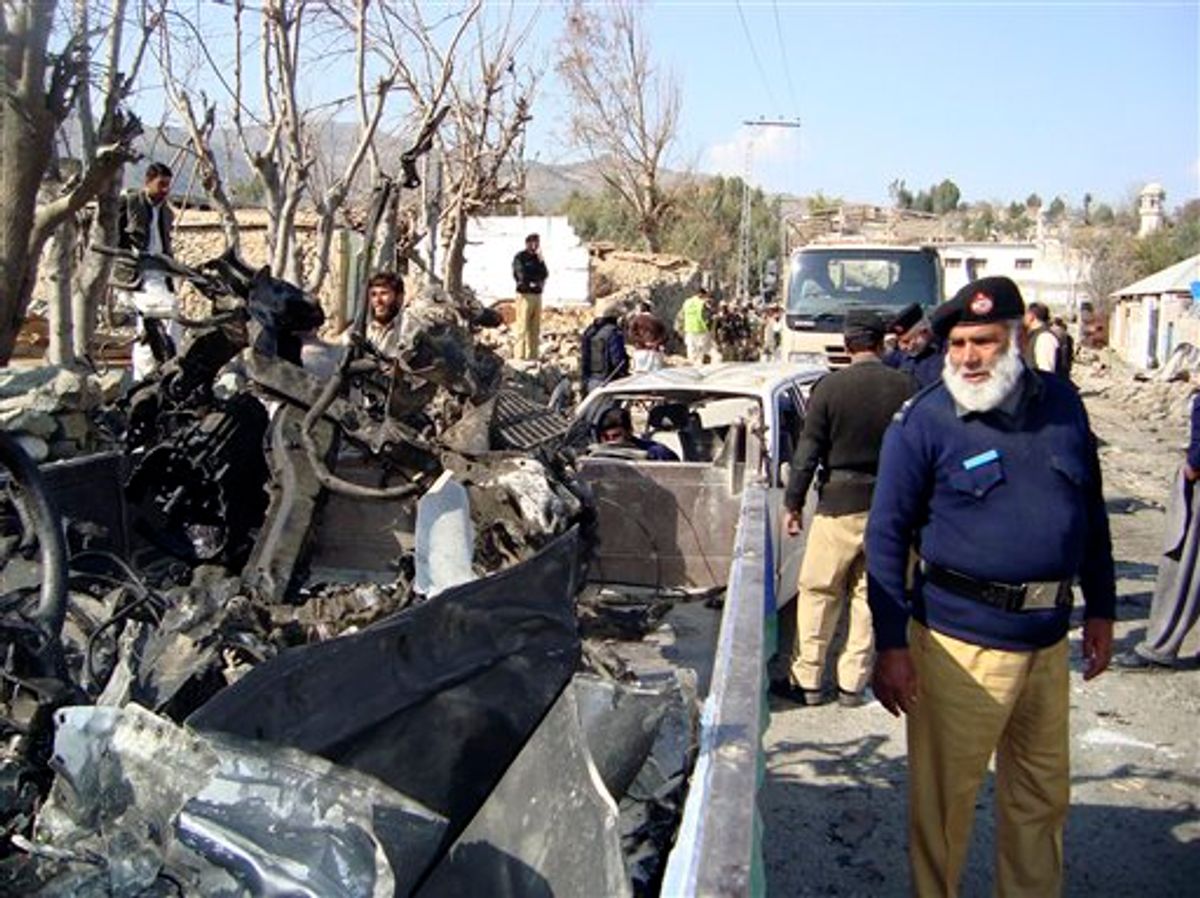 The fragile Pakistani government of Prime Minister Yusuf Raza Gilani and President Asaf Ali Zardari was deeply embarrassed Wednesday when a massive bombing killed three U.S. soldiers on the ground in that country. The Pakistani public has been increasingly upset about U.S. military and paramilitary (Blackwater/Xe) actions in their country. On Tuesday, several U.S. drone strikes killed a total of 29 persons. The controversy over whether the U.S. is actually fighting a third war, in Pakistan, may have been settled by the troop deaths.

On Wednesday morning, a suicide car bomber slammed into a Frontier Corps convoy of vehicles heading to inaugurate a girls school in the village of Kad, in the Lower Dir district of northwest Pakistan, killing seven and wounding at least 130. Among the dead were three U.S. troops in Pakistani dress and a Frontier Corpsman. The others were schoolgirls. The attack occurred as the convoy was reaching two girls' schools, one an elementary school and one a high school rebuilt with U.S. funds. The force of the blast collapsed the high school's walls, but it was empty. Most of the wounded were schoolgirls in the elementary school, hit by flying glass and debris; ironically, given that the Taliban claim to be Muslims, some were having their class on Islam when the shrapnel hit them.

The bombing was claimed by the Tehrik-i Taliban Pakistan (Taliban Movement of Pakistan), according to Agence France Presse: "We claim responsibility for the blast," Tehreek-e-Taliban Pakistan (TTP) spokesman Azam Tariq said in the call from an undisclosed location. "The Americans killed were members of the Blackwater group. We know they are responsible for bomb blasts in Peshawar and other Pakistani cities."

Many Pakistanis believe that the wave of bombings besetting their country, blamed by the mainstream on the Taliban, is secretly carried out by American agents, in order to destabilize Pakistan and justify a U.S. imperial presence.

The bombing differs little from numerous other such attacks in the frontier badlands, but is distinctive because it accidentally revealed that some 200 U.S. troops are on the ground in Pakistan, some 60-100 on a training mission. Those killed had been giving training and support to the Frontier Corps, a Pakistani unit charged with policing the lawless Pashtun areas on the border between Pakistan and Afghanistan.

The U.S. soldiers were apparently in the area to train the FC [Frontier Corps] personnel engaged in the military operation against the Taliban in Maidan, which is the native area of Tanzim Nifaz Shariat-e-Muhammadi's [Organization for the Implementation of the Law of Muhammad's] jailed chief Maulana Sufi Muhammad. The Taliban group in the area was commanded by Hafizullah, who had escaped the action.

The Daily Times notes, "Local authorities appear confused by the foreign troops’ plans to attend the inauguration of the school, as “they had little role in the project."

But in fact, The Guardian reveals,

The attack also highlighted an even less well-known civilian aid scheme: a retired U.S. official said the defence department had been discreetly funding development projects such as schools in North West Frontier for years. The targeted soldiers could have been going to the school in Dir as "a show of solidarity" with their Pakistani colleagues, he said.

The targeting of the convoy by truck bomb strongly suggests that the operation was an assassination aimed at the U.S. troops, and further suggests that the Taliban had a man on the inside among the Frontier Corps, who could report the Americans' movements. The U.S. military is known to use jamming technology that interferes with the detonation of roadside bombs by remote control, so that ramming by car bomb would be the only way an insurgent group could bomb them.

Opinion polls show that many observers in Pakistan already feel that the U.S. is humiliating their country and sowing discord there, and this revelation of the presence of U.S. troops on the ground, along with the Department of Defense role in building girls' schools, will further raise hackles (and risks making girls' schools unpopular even among non-Taliban).

The USG Open Source Center translated an editorial by Dr Hussein Ahmed Paracha: "How Much Dignity is Left?", published in Nawa-e Waqt in Urdu on January 18, 2010, which exemplified this point of view:

The United States has been attacking within Pakistani land with drones for the last four to five years and is also killing innocent people. . . There were 44 drone attacks in 2009 alone in which more than 700 innocent people, majority of whom were innocent children, elderly, and women, were killed. According to the statistics provided by various agencies, those who belonged to "Al-Qa'ida" or the Taliban could not be more than 18. . .

Having made sure that the wealth of our national dignity has turned to ashes and the last flame has burned down, the U.S. Administration has now announced a program of naked screening for the passengers coming from a few countries. All these countries are Muslim countries, and Pakistan is one of them. Yes, the same Pakistan, which is the frontline U.S. ally in war against terror. Pakistan has danced to death in others' parties and has made fun of itself. It is the same Pakistan, which left its citizens starving and spent $35 billion in others' war. . .

The United States is bent on treating us shamelessly. Moreover, we pay too much regard to anyone coming from the United States. The Blackwater operatives, who committed heinous and inhuman crimes in Iraq, come wherever they please in Pakistan without visa or travel document. They keep on roaming around in vehicles with fake number plates with dangerous weapons. These U.S. officials point guns at the security people if asked to reveal their identity. During a few minutes debate, there is a series of phone calls from the high officials, and they, who consider Pakistan as their playground, are allowed to go with honor

In an opinion poll done last summer, 64 percent of the Pakistani public said that they saw the U.S. as an 'enemy,' and only 9 percent saw it as an ally.

Pakistan was born out of the freedom struggle against British colonial domination, which aimed at securing independence for what had been branded as 'British India' and an end to control of the place by foreign Western white Christian troops. The return of such troops to Pakistani soil under an American guise will be highly unwelcome to most Pakistanis. Now that Pakistan is having parliamentary elections again, moreover, it matters what the public thinks, because they could well vote for anti-American parties in the next polls, as part of a backlash against U.S. intervention.