David Peace's genre-shifting novels hit the screen as a gripping, operatic trilogy of murder and corruption 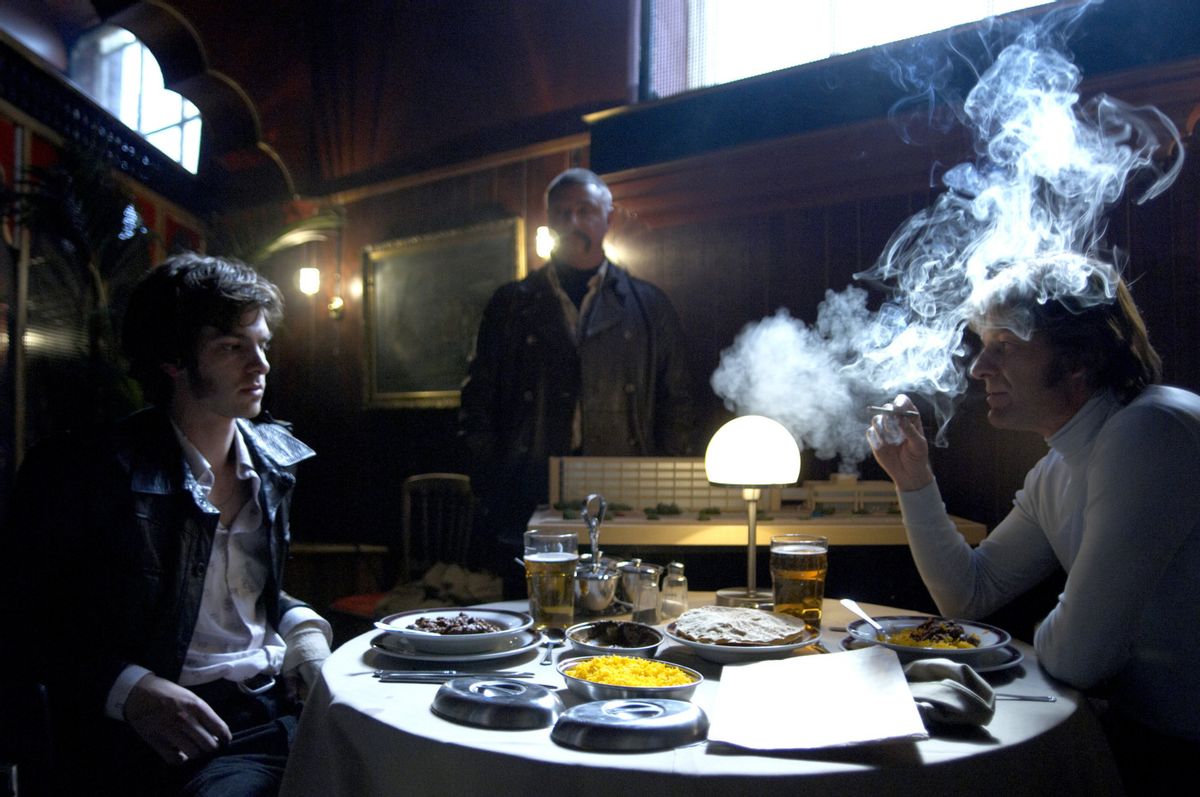 In your average gritty British TV crime serial, an imperfect but relatively decent character like hotshot crime reporter Eddie Dunford (Andrew Garfield) of "Red Riding: 1974," or crusading Manchester cop Peter Hunter (Paddy Considine) of "Red Riding: 1980," would ride into town and prove just big enough to part the seas of criminality and official corruption closing in on all sides. Sure, there would be setbacks, betrayals and unexpected reversals on the road toward catching the bad guys. Our hero might cross a moral or ethical line here and there, and spend a few late nights boozing too much or shagging a pulchritudinous colleague. But the outcome would never be in doubt.

In the "Red Riding" trilogy, a powerfully addictive series of interlinked crime dramas made by Britain's Channel 4 and adapted from the genre-shifting "Northern noir" series by novelist David Peace, doubt is the only constant. Arguably, the point of the "Red Riding" series, both in print and on screen, is to turn conventional crime fiction upside down and expose it as a comforting sham that's designed to shield us from the real world's brutality and greed. Guys like Dunford and Hunter may style themselves after Raymond Chandler's knights errant -- men who can walk the meanest streets of Yorkshire because they are not themselves mean -- but the social cesspool beneath the superficial provincial quiet of late-'70s northern England sucks away their morality, their decency and even their courage.

Peace's daunting and extraordinary quartet of novels -- something like a toilet-bowl "Ulysses," awash in bodily fluids, acts of pointless violence, unexplained backstory and shifting points of view -- is so internalized, so literary and so fantastical as to be anti-cinematic. Screenwriter Tony Grisoni has performed radical surgery on the books, extracting a few major characters, themes and storylines and abandoning many more. His version of '70s Yorkshire looks like a sun-kissed Polynesian paradise next to Peace's nihilistic, sub-Dante landscape of rape and vomit. Still, in their relatively viewer-friendly fashion the three films capture Peace's central vision and organizing principle: the idea that the notorious real-life "Yorkshire Ripper" serial-killer case, by far the biggest crime story of that time and place, was merely a symptom of a much deeper and more contagious social disease.

While the Ripper investigation forms the background for Peter Hunter's investigation in director James Marsh's "Red Riding: 1980" -- most gripping and cinematic of the three films -- it's more a parenthesis than the centerpiece. Hunter is at least as interested in ferreting out corruption, incompetence and cover-ups within the West Yorkshire police as he is in catching the killer. When Eddie Dunford returns to Leeds at the beginning of the series, in Julian Jarrold's grimy, shot-on-16mm "Red Riding: 1974," he has washed out as a Fleet Street journalist "down South" (i.e., in London) and the Ripper killings haven't even started, or at least haven't formed a discernible pattern.

Eddie notices something different: the abductions and/or murders of a series of schoolgirls, which all seem ambiguously linked to the grandiose development schemes of a local business tycoon named John Dawson (Sean Bean, infusing the role with tight-trousered braggadocio). Eddie naively assumes, at least at first, that the West Yorkshire cops actually want to catch the child-killer, and that they're only scared of Dawson because he's well-connected and rich. As one of Eddie's colleagues warns him, before dying in a suspicious car wreck, the real story is far more convoluted and sinister.

Peace's novels, each of them almost incomprehensible in itself, gradually fit together into a gigantic psychological jigsaw puzzle. In three 90-minute films, Grisoni can't possibly retain that degree of complexity, but elements remain: The outburst of vigilante violence at the end of "Red Riding: 1974" is fruitlessly investigated by Peter Hunter in "Red Riding: 1980," but not fully explained until the end of the trilogy, when Anand Tucker's "Red Riding: 1983" finally offers some possibly overcooked passages of explication. Of course the films and the books each have to stand on their own, but Grisoni's stripped-down narrative definitely offers advantages, throwing some of the story's archetypal themes into sharper relief.

"Red Riding" is a story of failed escapes and thwarted homecomings: Dunford, Hunter, a teenage male hustler named B.J. (Robert Sheehan) and an overweight, second-rate lawyer named John Piggott (Mark Addy) have all been drawn back to Yorkshire to face their destiny. For all its profanity and violence, "Red Riding" is also an old-fashioned morality tale where the wages of sin is death; everyone in the series who is guilty of a personal, private failing -- the betrayal of a spouse or lover -- is punished severely. Finally, the nexus of money, power and media in "Red Riding" is absolutely corrupt, and corrupts absolutely. Would-be white knights who believe they are immune to this law, like Dunford and Hunter, are the most deluded of all.

It's not coincidental that the only effective examples of heroism in the entire series come from people far from the levers of power, like the shlubby and depressed Piggott, who takes on the hopeless case of a retarded boy beaten into confessing the child-killings, and the victimized B.J., who makes a living on his knees in bus-station bathrooms but also knows many things people like Dunford and Hunter never understood. Their only counterpart within the police is the owlish, inscrutable Maurice Jobson (David Morrissey), a man so deeply implicated in corruption and conspiracy he has come out the other side into a disillusioned clarity.

This version of "Red Riding" is far more conventional and episodic than the novels, but there are still snatches of Peace's hallucinatory internal monologues, and Grisoni and the directors have slipped in a few Easter eggs for fans of the books. Boozy, doomed reporter Jack Whitehead and ambitious young police sergeant Bob Frazier (characters in Peace's novels who grasp important strands of the story) make brief but telling appearances -- and why is the mysterious Rev. Martin Laws (gravel-voiced Peter Mullan, enjoyable as always) so handy with power tools?

Opinions vary widely on how close the "Red Riding" books and movies come to capturing the real ambiance of the Ripper years in the depressed North of England. (If Ridley Scott's contemplated Hollywood version comes to fruition, that one will be even farther from reality.) As deprived and depraved as life in '70s Yorkshire may have been, it's worth noting that, crime-wise, it was nowhere near the level of any middle-sized American city. After a massively bungled investigation plagued by infighting and incompetence, the real-life Yorkshire constabulary caught the man who'd been brutally killing local prostitutes -- a truck driver named Peter Sutcliffe -- more or less by accident in 1981.

As the "Red Riding" films tell the story, Sutcliffe was little more than a pathological bystander, a solitary creep who inadvertently forced the North of England's establishment, in those dark years of recession, chronic unemployment and IRA guerrilla warfare, to spill some of its darkest secrets. Arguably Peace's yarn, with its subtextual narrative about a money-ruled, crypto-fascist pseudo-government lurking alongside the official one, has far wider applications than Yorkshire in the 1970s. On the other hand, it is about a particular time in a particular place, which may be why native Yorkshireman David Peace has lived in Tokyo for many years.

The "Red Riding" trilogy opens Feb. 5 at the IFC Center in New York and Feb. 12 at the Nuart Theatre in Los Angeles, with wider national release to begin Feb. 19.