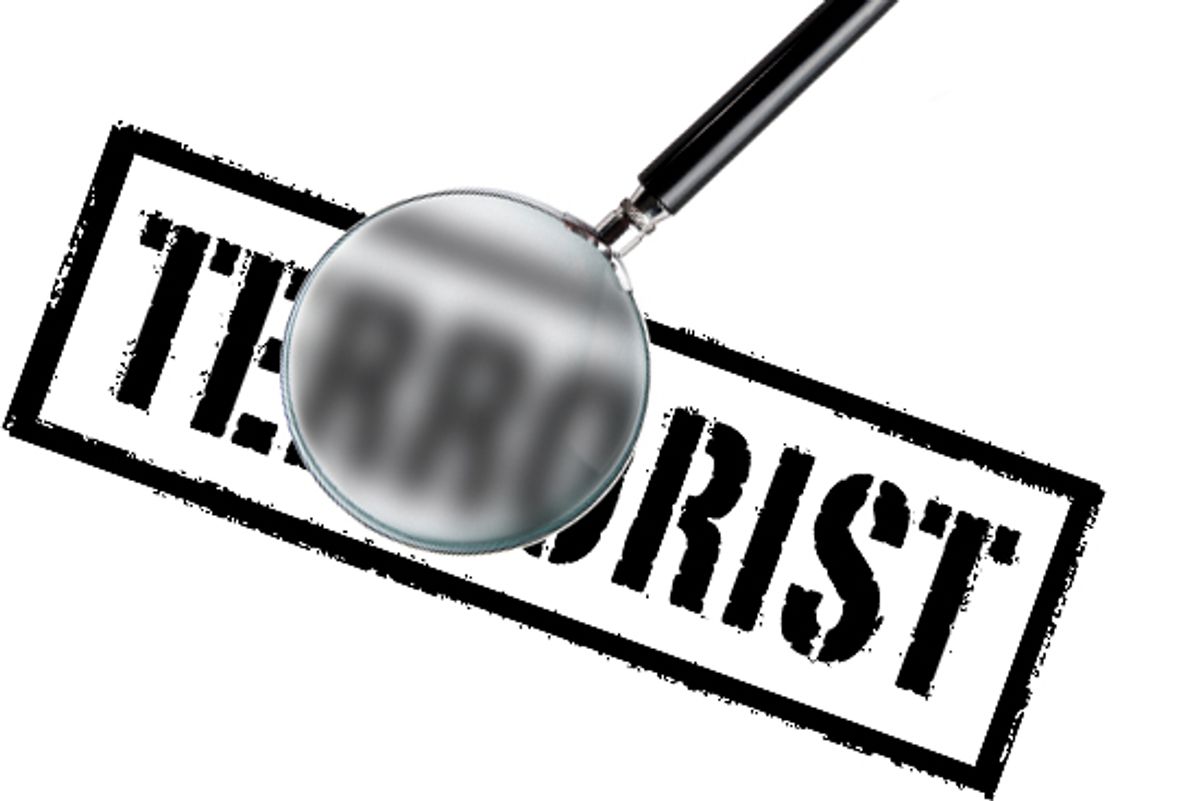 If I had the power to have one statement of fact be universally recognized in our political discussions, it would be this one:

The fact that the Government labels Person X a "Terrorist" is not proof that Person X is, in fact, a Terrorist.

That proposition should be intrinsically understood by any American who completed sixth grade civics and was thus taught that a central prong of our political system is that government officials often abuse their power and/or err and therefore must prove accusations to be true (with tested evidence) before they're assumed to be true and the person punished accordingly.  In particular, the fact that the U.S. Government, over and over, has falsely accused numerous people of being Terrorists -- only for it to turn out that they did nothing wrong -- by itself should compel a recognition of this truth.  But it doesn't.

All throughout the Bush years, no matter what one objected to -- illegal eavesdropping, torture, rendition, indefinite detention, denial of civilian trials -- the response from Bush followers was the same:  "But these are Terrorists, and Terrorists have no rights, so who cares what is done to them?"  What they actually meant was:  "the Government has claimed they are Terrorists," but in their minds, that was the same thing as:  "they are Terrorists."  They recognized no distinction between "a government accusation" and "unchallengeable truth"; in the authoritarian's mind, by definition, those are synonymous.  The whole point of the Bush-era controversies was that -- away from an actual battlefield and where the Constitution applies (on U.S. soil and/or towards American citizens wherever they are) -- the Government should have to demonstrate someone's guilt before it's assumed (e.g., they should have to show probable cause to a court and obtain warrants before eavesdropping; they should have to offer evidence that a person engaged in Terrorism before locking them in a cage, etc.).  But to someone who equates unproven government accusations with proof, those processes are entirely unnecessary.  Even in the absence of those processes, they already know that these persons are Terrorists.  How do they know that?  Because the Government said so.  Even when it comes to their fellow citizens, that's all the "proof" that is needed.

That authoritarian mentality is stronger than ever now.  Why?  Because unlike during the Bush years, when it was primarily Republicans willing to blindly trust Government accusations, many Democrats are now willing to do so as well.  Just look at the reaction to the Government's recent attempts to assassinate the U.S.-born American citizen and Islamic cleric Anwar al-Awlaki.  Up until last November, virtually no Americans had ever even heard of al-Awlaki.  But in the past few months, beginning with the Fort Hood shootings, government officials have repeatedly claimed that he's a Terrorist:  usually anonymously, with virtually no evidence, and in the face of al-Awlaki's vehement denials but without any opportunity for him to defend himself (because he's in hiding out of fear of being killed by his own Government).  The Government can literally just flash someone's face on the TV screen with the word Terrorist over it (as was done with al-Awlaki), and provided the face is nefarious and Muslim-looking enough (basically the same thing), nothing else need be offered.

That's enough for many people -- including many Democrats -- to march forward overnight and mindlessly proclaim that al-Awlaki is "a declared enemy of the United States working to kill Americans" (if you can stomach it, read some of these comments -- from Obama defenders at a liberal blog -- with several sounding exactly like Dick Cheney, screeching:  "Of course al-Awlaki should be killed without charges; he's a Terrorist who is trying to kill Americans!!!").  Even now, beyond government assertions about his associations, the public knows virtually nothing about al-Awlaki other than the fact that he's a Muslim cleric with a Muslim name dressed in Muslim garb, sitting in a Bad Arab Country expressing anger towards the actions of the U.S. and Israel.  But no matter.  That's more than enough.  They're willing not only to mindlessly embrace the Government's unproven accusation that their fellow citizen is a TERRORIST ("a declared enemy of the United States working to kill Americans"), but even beyond that, to cheer for his due-process-free execution like drunken fans at a football game.  And the same people declare:  no civilian trials are necessary for Terrorists (meaning:  people accused by the Government of being Terrorists).  Even more amazingly, the identities of the other Americans on the hit list aren't even known, but that's OK:  they're Terrorists, because the Government said so.

A very long time ago, I would be baffled when I'd read about things like the Salem witch hunts.  How could so many people be collectively worked up into that level of irrational frenzy, where they cheered for people's torturous death as "witches" without any real due process or meaningful evidence?  But all one has to do is look at our current Terrorism debates and it's easy to see how things like that happen.  It's just pure mob mentality:  an authority figure appears and affixes a demonizing Other label to someone's forehead, and the adoring crowd -- frothing-at-the-mouth and feeding on each other's hatred, fears and desire to be lead -- demands "justice."  I imagine that if one could travel back in time to the Salem era in order to speak with some of those gathered outside an accused witch's home, screaming for her to be killed, the conversation would go something like this:

Far Left Civil Liberties Extremist-Purist ("FLCLE-P"):  How do you know she's a witch?

FLCLE-P:  But don't you want to see real evidence before you assume that's true and call for her death?

Mob Participant:  You just heard the evidence!  The magistrate said she's a witch!

FLCLE-P:  But shouldn't there be a real trial first, with tangible evidence and due process protections, to see if the accusation is actually true?

Mob Participant:  A "real" trial?  She's a witch!  She's trying to curse us and kill us all.  She got more than what she deserved.  Witches don't have rights!!!

That's essentially how I hear our debates over Terrorism, and how I've heard them for quite some time.  And it's how I hear them more loudly now than ever before.  And with those deeply confused premises now locked into place on a bipartisan basis ("no trials are needed to determine if someone is a Terrorist because Terrorists don't have rights"), imagine how much louder that will get if there is another successful terrorist attack in the U.S.  But in fairness to the 17th Century Puritans, at least the Salem witches received pretenses of due process and even trials (albeit with coerced confessions and speculative hearsay).  Even when it comes to our fellow citizens, we don't even bother with those.  For us, the mere accusation by our leaders is sufficient:  Kill that American Terrorist with a drone!

UPDATE:  A long-time, regular commenter here, Jestaplero, is a state prosecutor in New York, and he explains -- in this comment -- how the mentality discussed here can and does easily expand beyond the realm of Terrorism.

Interestingly, even Allahpundit at Michelle Malkin's Hot Air recognizes the serious dangers in allowing the Government to decree even U.S. citizens to be "Terrorists" and then treat them accordingly, with no due process.  But note how his right-wing commenters are almost exclusively of the "just-kill-him" school of thought, and how identical they sound to that minority of Daily Kos commenters I linked above who, in their blind loyalty to Obama, also insist that there's nothing wrong with simply snuffing out the lives of their fellow citizens who are "Terrorists" (meaning:  anyone their Leader claims is a Terrorist) with no due process or oversight whatsoever.  Ultimately, authoritarians are authoritarians, regardless of whether they situate themselves on the left or right.