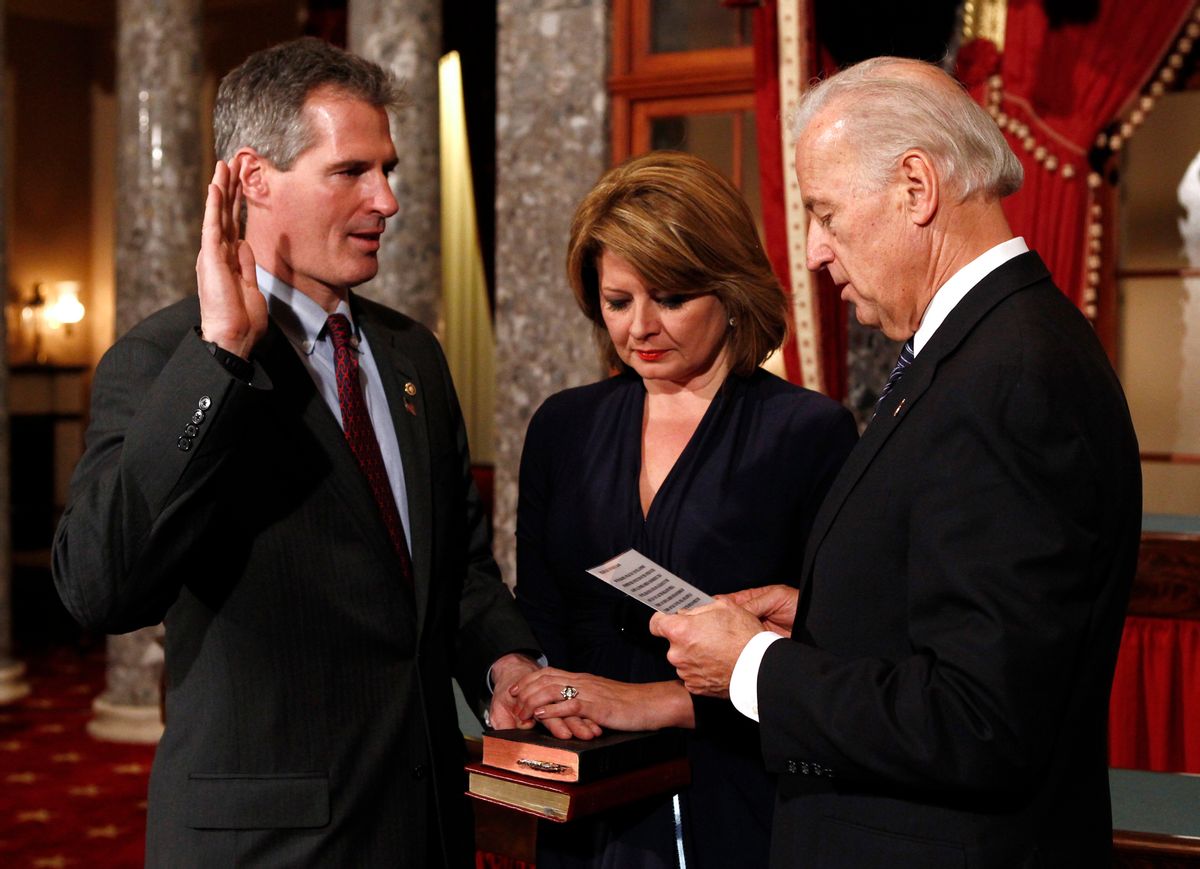 For a guy whose victory was heralded by Republicans around the nation as the first shot in a GOP revolution, Sen. Scott Brown, R-Mass., arrived in Capitol Thursday with only the bare minimum of partisan fervor. He joked with his new colleague, Democrat John Kerry, on the Senate floor before he was sworn in; the man he's replacing, temporary stand-in Sen. Paul Kirk, even joined in the laughs for a while (before, presumably, heading off to fill out forms to collect his government pension). A handful of Democrats joined most of the Republican caucus to watch, and applaud, as he took the oath of office. It was all very chummy, as things tend to be in the Senate.

But then Brown headed upstairs and began to talk. A reporter asked him if he might -- as he promised during the campaign -- work with Democrats on some issues, like a jobs bill scheduled for a vote next week. "Well, the last stimulus bill didn't create one new job," Brown said. "It may have retained some, but it hasn't created any new jobs. I need to see what's in the bill." On healthcare reform? "We need to basically go back to the drawing board and -- and start again." On cutting taxes, even as the government struggles with record deficits? "Bottom line is, when you offer tax reductions and tax cuts, there will be more people with more money in their pocket, and that will naturally create more jobs."

Welcome to the new Washington, where Brown has given Republicans not only the 41st Senate vote they need to help keep Democrats even more paralyzed than they've been for a year, but also an eagerness for the November elections to roll around that borders on a mania. And where Brown talks a big game about being a "Scott Brown Republican," but hires his new press secretary straight from the Republican National Committee, and announces plans to stump for John McCain as soon as he gets to town.

Brown's debut came sooner than expected; he pushed Massachusetts officials to certify his election a week ahead of schedule and made it to Washington a day ahead of what looks likely to be a massive snowstorm to start his new job. "There's no hidden agenda," Brown said. "There are a lot of votes pending that I would like to participate in. And even more importantly, there are urgent times for our nation." (Besides the economy and the budget, Brown said he wanted to get to work because the CIA director had said "there will be another Al Qaida attack here in the United States in the next three to five months," ratcheting up what had been a warning of an attempted attack to a certainty.)

Aides to Senate Democrats say they're a little worried about Brown's vote on the confirmation of union lawyer Craig Becker to the National Labor Relations Board, which Republicans could now block with a filibuster. Brown wouldn't commit to voting for or against procedural motions to move Becker's nomination along. That was about the only vote Brown's early arrival was likely to make a difference on. Perhaps naively, aides expect a jobs bill, still not quite written yet, to draw bipartisan support. As if on cue, White House officials posted a fresh attack on GOP delaying tactics on the administration's official blog, barely an hour before Brown was sworn in.

Meanwhile, there was one downside to Brown's early arrival. The accelerated schedule left him stranded in the capital without the pickup truck that became a symbol, no matter how clichÃ©, of his populist, "Everyman" touch. (No official word on what his nude "Cosmo" centerfold pictures symbolized in the campaign.) Brown zipped around town Thursday in the standard D.C. politician's ride, a black S.U.V. driven by aides. But don't worry, the truck's on its way. "Coming down next week," he said. Democrats, consider yourselves warned.