Organizers hoped to bring a group known for costumes and often crude hyperbole into the mainstream. Did it work? 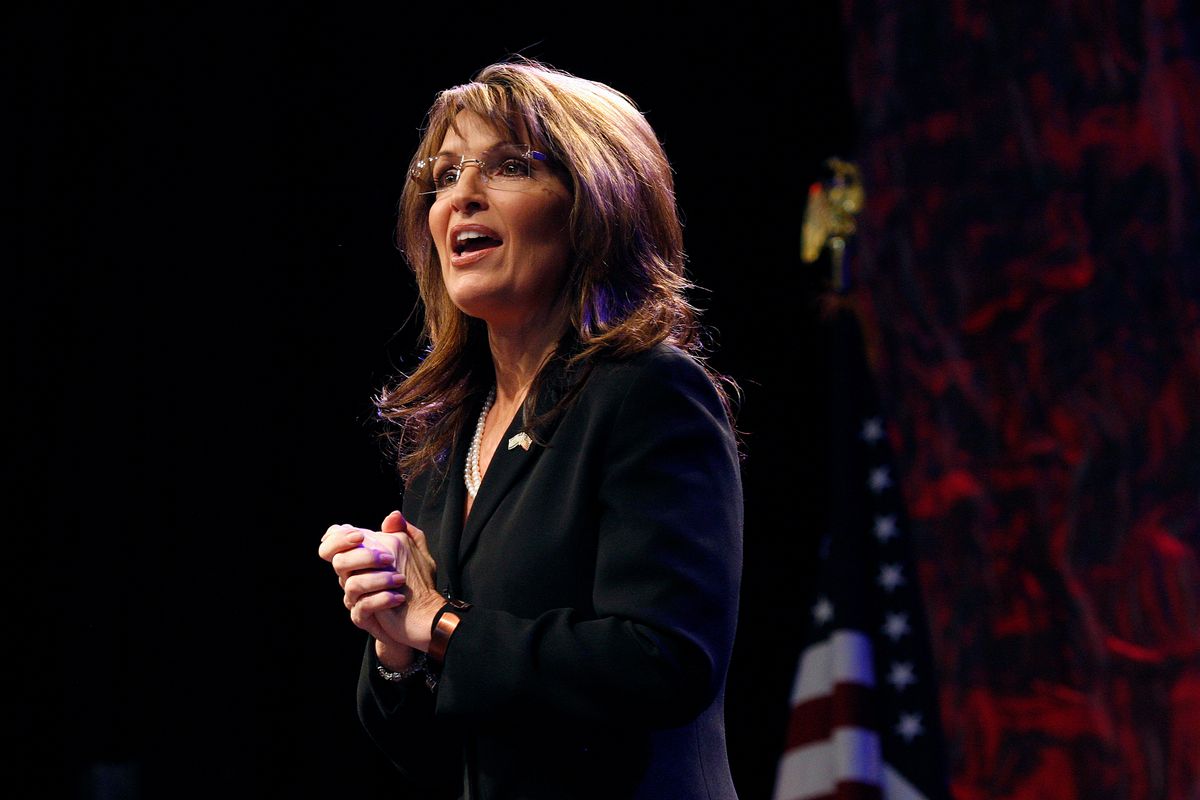 Although former Alaska Gov. Sarah Palin was the headlining act at this weekend’s National Tea Party Convention, the guy with the costumes sometimes threatened to steal the show.

William Temple, 59, came to the inaugural event in Nashville armed with a wardrobe of period dress. On each of the three days of the confab, the ex-Secret Service agent strutted the halls of the Gaylord Opryland Resort & Convention Center tricked out in a different 17th or 18th century getup, including kilts, leggings and tricorn hats.

Due to his Founding Fathers flair, the Georgia native was a favorite with the 120 or so members of the international press in town to cover the event; all weekend reporters flocked to Temple’s side while he delivered his bombastic big government jeremiads. By Saturday evening, he’d become the conference’s de facto mascot.

"I am not for the Republican Party. When they send me their documents, I tear them up and throw them in the trash," Temple thundered to reporters on the conference’s first day. "I pick individual candidates now based on whether or not they’ll support the Constitution."

Even though a majority of the 600 conventioneers on hand for Tea Party Nation’s high-priced event seemed to echo Temple’s independent ideology, the costumed crusader was still a bit out of sync with his fellows. This theatrical brand of tea partying was what originally put the movement on the map. But ironically the bombast was mostly absent from this weekend’s conference. Instead of rowdy grass-roots upstarts, the event was attended by a mild pack of mostly white, middle-aged and polite men and women.

But the sedate nature of the conference shouldn’t be taken as a sign the tea party phenomenon is fading. The calm tone reflected an effort by event organizers Judson Phillips and Mark Skoda to reposition the movement as a legitimate political force.

“Let’s not be naive here, the notion of holding up signs and simply responding with emotion does not get people elected,” Skoda told reporters.

Throughout the weekend, Tea Party Nation tried to present the image of an older and wiser movement, one of a tea party that’s moved beyond demonstration alone and is ready for constructive activism. As part of this message, organizers continuously urged unity, telling attendees that fragmentation stands in the way of electing candidates who support a truly conservative agenda.

It's undeniable that the Nashville event itself created a schism within the wider tea party world. Purists say AstroTurf has edged out the grass-roots spirit, and accuse Phillips and other organizers of buddying up to the GOP establishment for personal gain. Some of the event’s planner’s harshest critics are former Tea Party Nation volunteers.

And Phillips' effort to present a kinder, gentler face to the movement was set back a bit by opening speaker Tom Tancredo, best known for strident opposition to illegal immigration. According to Tancredo, "people who could not even spell the word 'vote', or say it in English, put a committed socialist ideologue in the White House. His name is Barack Hussein Obama."

After Tancredo's speech, Phillips and Skoda split over whether it was helpful to the cause. Phillips praised it to CNN. "Tom Tancredo gave a fantastic speech last night. I think he is an amazing politician ... The word 'socialist' is a word you don't want to be labeled with in the American political system. It's got a lot of negative connotations, but it also has a very specific political meaning. It refers to a specific political ideology. I think it is very clear that that is the political ideology of Barack Obama." But Skoda told the cable news network Tancredo's message "doesn't further the dialogue."

After two days of lead-up, the conventioneers were primed for Palin’s speech, lining up outside the banquet hall on Saturday evening hours before the event. When the dinner began, the 600 original attendees were joined by an additional 500 guests who shelled out $349 for a seat and a dinner of lobster and filet mignon.

Then right-wing agitator Andrew Breitbart introduced Palin, noting he had long yearned to meet her.  He paused and added, "A man can have his fantasy."

Meeting Palin appeared to have been a lot of tea partiers' fantasy. Her comments were often interrupted by standing ovations from ecstatic conventioneers more than willing to break into a “Run, Sarah, run” chant at any moment.

But Palin’s speech wasn’t as much a direct tea party call-to-arms as a 50-minute test run of campaign material; with her characteristic homespun sarcasm, the former governor used her podium time to deride the “Obama-Pelosi-Reid agenda,” a policy she claimed will leave the country “less secure, more in debt, and more under the thumb of big government.”

She targeted the Obama administration on all fronts. Beginning with national security, she lambasted the president’s response to the failed Christmas Day bombing and said it illustrated the same weak approach to terrorism that led to the 9/11 attacks.

“To win that war, we need a commander in chief, not a professor of law,” Palin said above a roar of applause from the crowd.

On the home front, Palin criticized the $775 billion stimulus package for its lack of fiscal responsibility and told the crowd the president’s recent budget was “immoral” because it was “sticking our kids with the bill,” a line that garnered one of the evening’s loudest reactions from the banquet hall.

But Palin’s strongest encouragement for the movement specifically came in a rare question and answer session with a fawning Phillips following the speech. (Despite the softball questions, some bloggers charged after the event that Palin appeared to have to check her hand for answers.) When asked about the future of the tea party, the former governor was adamant the group represented “the future of politics.”

“The Republican Party would be really smart to try and absorb as much of the tea party movement as possible,” Palin said. “This is a beautiful movement because it is shaping the way politics are conducted. You’ve really got both party machines running scared.”

Palin’s answer was in keeping with the message event organizers had spread at the conference. Phillips and Skoda pressed home to attendees that Tea Party Nation was not for establishing a third party, but would rather use grass-roots momentum to drive the Republican Party to the right. Over the weekend the pair announced plans to form the nonprofit Ensuring Liberty Corp., and a related political action committee. The group will take corporate donations and give money to candidates that match the tea party’s principles.

It’s a move that not only represents the further organization of the tea party movement, but is another example of Phillips’ habit of steering grass-roots efforts into more mainstream directions while allegedly leaving other activists behind. Nothing illustrates that more than the rocky history of Tea Party Nation. According to former volunteers, Phillips was responsible for eschewing the group’s original grass-roots ethics in order to reposition the group as a national player.

By day a DUI lawyer in the nearby affluent enclave of Franklin, Tenn., Phillips was an organizer of two tea party rallies in early 2009 that drew considerable crowds to the Legislative Plaza in downtown Nashville. As the group -- then known as the Tennessee Tea Party -- gained traction, Phillips took aim at establishing a new brand, according to former supporters.

In April 2009, Phillips rechristened his group Tea Party Nation and went live with a social networking site envisioned as a conservative activist’s form of Facebook; the attorney also organized the outfit as a for-profit entity -- a move that raised concerns among the group’s faithful.

One of those individuals was Kevin Smith, the group’s webmaster. According to a lengthy blog post in January, Smith became disillusioned with the group not only after learning of the for-profit status, but also because of a lack of transparency regarding donated funds. When these qualms finally forced him to resign on April 24, Smith says Phillips turned ugly, accusing the former webmaster of trying to crash the group’s site and eventually threatening legal action. Since his exit, Smith says he’s realized Phillips has abandoned his activist roots for the Republican establishment.

“It’s become clear to me that Judson and his for-profit Tea Party Nation Corporation are at the forefront of the GOP’s process of hijacking the tea party movement,” Smith wrote in his blog post. “What began as cries for true liberty and a public showing of frustration with the big government policies of both Democrats and Republicans has now been co-opted by mainstream Republican demagogues determined to use this as their 2010 election platform.”

According to Smith, all of the original members of the local tea party group have since jumped ship. At least one other former volunteer, East Tennessee tea party organizer Anthony Shreeve, has also publicly denounced Tea Party Nation’s leadership. In an interview with Politico, Shreeve said, “the tea party movement is a grass-roots movement; it’s not a business,” and added that Phillips’ convention could be detrimental to the movement because “it’s a premature national initiative that doesn’t have the support of the majority of we the people.”

Although Phillips publicly denounced the whistle-blowers as apostates with an ax to grind, there was a considerable fallout from the schism. Tea Party Nation’s for-profit status and the outcry over ticket prices led to the pull-out of sponsors Tea Party Express, American Liberty Alliance and National Precinct Alliance. Reps. Michele Bachmann and Marsha Blackburn canceled their convention appearances as well.

If the National Tea Party Convention was the second stage in the evolution of the movement for Tea Party Nation, Ensuring Liberty Corp. appears to be the next step. However, as the group rebrands and gets further way from the public hysteria of the original tea party events, it's likely to shed more of the support the movement has relied on for momentum up to this point.

The Gaylord Opryland was an odd locale as a training ground for future grass-roots revolutionaries. The resort is located about 10 miles from downtown Nashville, stranded out amid miles of parking lots, fast food outlets and discount motels.

On the inside, the complex is a conventioneer’s playground, well-stocked with elegant meeting space, restaurants, high-end boutiques and a trendy nightclub. The sprawling building is arranged around four massive atriums crowned with towering glass roofs; on the main floor indoor rivers snake past transplanted palm trees and terraced walkways.

Despite the event’s notoriety, the National Tea Party Convention took up only a small amount of the resort’s meeting space, sharing the area with a conference of woman bloggers.

Kyle Swenson is a writer in Nashville.