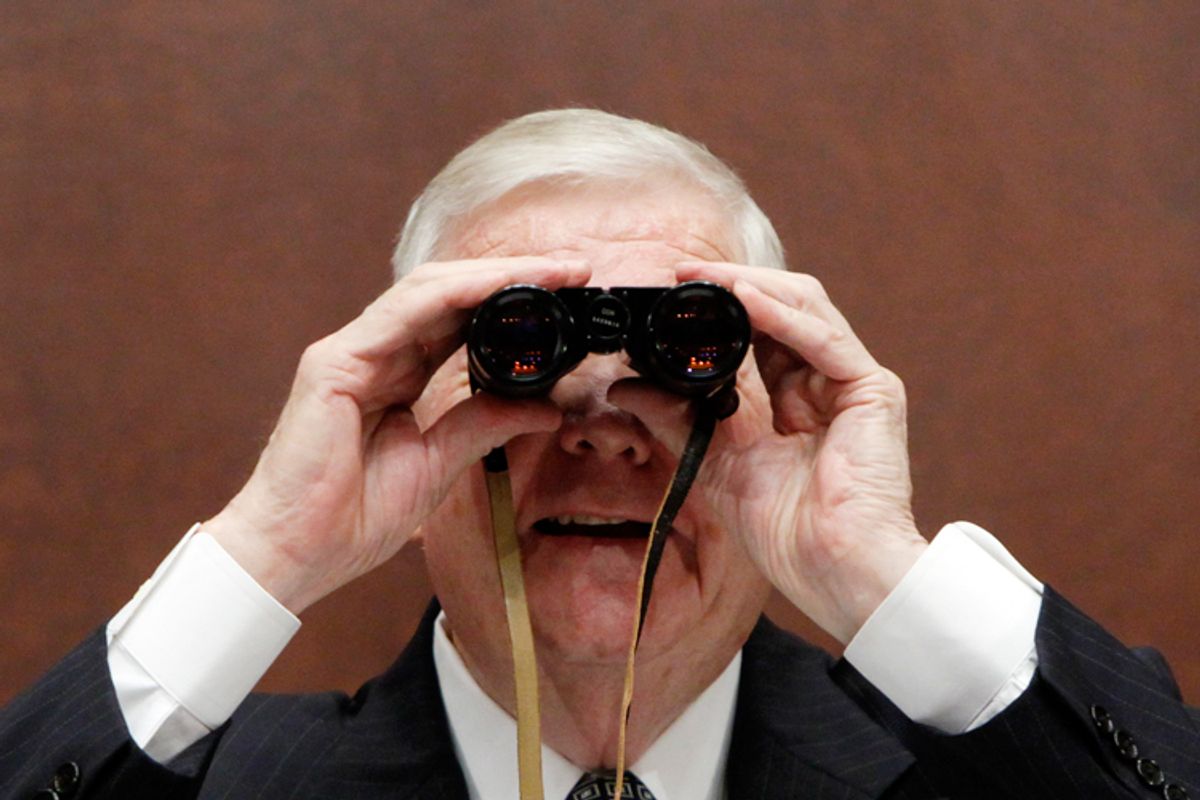 House Appropriations-Defense subcommittee Chairman Rep. John Murtha , D-Pa., jokes around before a hearing on the Defense Department's budget in Washington on May 20, 2009.
--

Rep. John Murtha, a Democratic defense hawk whose transformation to a dove over the war in Iraq helped the party surge back to power during the Bush administration, died Monday at Virginia Hospital Center from complications of gallbladder surgery. He was 77.

Murtha -- who became the longest-serving House member in Pennsylvania history on Saturday, after 19 terms in Congress -- was one of the masters of legislative negotiations and backroom dealing, and his support in 2006 helped make Nancy Pelosi the first woman speaker of the House. Pelosi, in turn, backed Murtha in his losing race against Rep. Steny Hoyer, D-Md., to be the House majority leader.

For years, Murtha steered billions of dollars in federal projects to military contractors in his district near Johnstown, Pa., and he supported big defense budgets from his perch on the House committee that oversaw Pentagon spending. He was one of the proudest practitioners of congressional "earmarking," dropping little grants that benefited his district into must-pass defense spending bills without a moment's hesitation or apology. (When President Obama pushed for a freeze on discretionary spending last month, Murtha laughed about it. "Well, he can call for it, but we're the guys who make the decision," the Washington Post quoted him as saying. "I always remind them of that.")

His financial support for the military and his own decorated career in the Marines amplified Murtha's voice when he called, in 2005, for withdrawing troops from Iraq. "Our troops have become the primary target of the insurgency," he said. "It's time to bring them home." That wound up giving more and more House Democrats political cover to push for the war to end -- which became part of the party's rallying cry in the 2006 elections, when Democrats seized control of Congress.

By then, Murtha and Pelosi had already become close. Murtha managed Pelosi's campaign against Hoyer in 2001 to become the Democratic whip, helping to convince conservative members of the caucus to support a San Francisco liberal. A year later, she was elected House minority leader; by 2006, no one even challenged her bid to become speaker. Pelosi made no secret that she wanted Murtha to beat out Hoyer to become her second-in-command that fall, sending a letter to other Democrats just before the vote. That backfired, though, and Hoyer won easily.

Part of the reason, though Pelosi played it down, was that Murtha's eager earmarking ways had given some people around Washington the idea that he was a bit crooked. Good-government groups on the left and the right constantly hammered at the contracts Murtha got for defense firms in his district. In 2008, FBI agents raided a lobbying firm run by a friend of Murtha's, and last year, the feds raided Kuchera Industries, which Murtha had helped win more than $100 million in contracts over the years. House ethics investigators reported earlier this winter that Murtha was in the clear, though.

Reaction to Murtha's death started slowly on Monday, with Washington still digging out from a weekend blizzard (federal offices are closed, and Congress put off votes until lawmakers can catch flights back later in the week). House Republican leader John Boehner did put out a statement not long after the news broke, though. "Today, our nation has lost a decorated veteran and the House of Representatives has lost one of its own," he said. "I was saddened to hear of John Murtha's passing, and my thoughts and prayers are with his friends and loved ones. I also want to express my condolences to Speaker Nancy Pelosi, who valued Congressman Murtha's advice and friendship. He will be missed."

A special election will be held to fill Murtha's seat, which could set off another nasty fight between Democrats and Republicans in a conservative district. John McCain beat President Obama there in 2008, even as Murtha won another term. Pennsylvania's primary is already set for May 18, and that's likely to be the date for the House special election, as well.

UPDATE: The White House has put out a statement on Murtha now:

Michelle and I were deeply saddened today to hear about the passing of Congressman John Murtha. Jack was a devoted husband, a loving father and a steadfast advocate for the people of Pennsylvania for nearly 40 years. His passion for service was born during his decorated career in the United States Marine Corps, and he went on to earn the distinction of being the first Vietnam War combat veteran elected to Congress. Jack’s tough-as-nails reputation carried over to Congress, where he became a respected voice on issues of national security. Our thoughts and prayers are with his wife of nearly 55 years, Joyce, their three children, and the entire Murtha family.

Pelosi issued one, too:

Today, with the passing of Jack Murtha, America lost a great patriot. He served our country on the battlefield winning two Purple Hearts and the Bronze Star. He served his country in his community winning the hearts of his constituents and served in the Congress winning the respect of his colleagues.

On Saturday, he became the longest-serving Member of Congress from Pennsylvania, and one of the most distinguished. He is well-recognized as a champion of our national security; always putting the troops and their families first. He quietly and regularly visited our men and women serving our country who were injured to assess their needs and offer them thanks and encouragement. As proud Marine, he was always Semper Fi!

The nation saw his courage writ large when he spoke out against the military engagement in Iraq – winning him the John F. Kennedy Profile in Courage Award.

Jack was also a hero in advancing scientific research to fight breast cancer, prostate cancer, diabetes, and HIV/AIDS. He measured the strength of our country by our military might and also by the well-being of the American people.

San Francisco lost a good friend in Jack Murtha. His leadership as Chairman of the Defense Appropriations Subcommittee was essential in turning the Presidio from post to park.

Dedicated to God and Country, and devoted to Joyce and their family, Jack Murtha was a giant. All who served with him were honored to call him colleague. I was privileged to call him friend.

I hope that is a comfort to Joyce; their children, Donna Sue, John and Patrick; and their grandchildren that so many people mourn their loss and are praying for them at this very sad time.

With the passing of Congressman Jack Murtha, America has lost a patriotic veteran, Pennsylvanians have lost a tireless advocate, and we have lost a friend.

Congressman Murtha dedicated his life to serving the nation he loved. As a Marine who wore the uniform for 37 years, Congressman Murtha courageously fought in Vietnam. As Chairman of the House Appropriations Subcommittee on Defense, Congressman Murtha worked to ensure that our men and women in uniform and their families had the support and resources they deserve.

In 2005, Congressman Murtha inspired a new generation by taking up the fight to end the Iraq War. His leadership will be missed, but his place in history is secured as the first combat veteran of the Vietnam War elected to Congress. Three days ago on February 5th, 2010, he became the longest serving Member of Congress in the history of Pennsylvania.

On behalf of the Democratic Congressional Campaign Committee, I extend my deepest condolences to Congressman Murtha's wife Joyce, their children, their grandchildren, and his constituents in Pennsylvania’s 12th Congressional District. I hope it is of some comfort that the thoughts and prayers of so many are with them at this difficult time.