Oscar 2010: In defense of Sandra Bullock

Her critics sniff that she just plays herself, but the fierceness of her "Blind Side" performance can't be denied 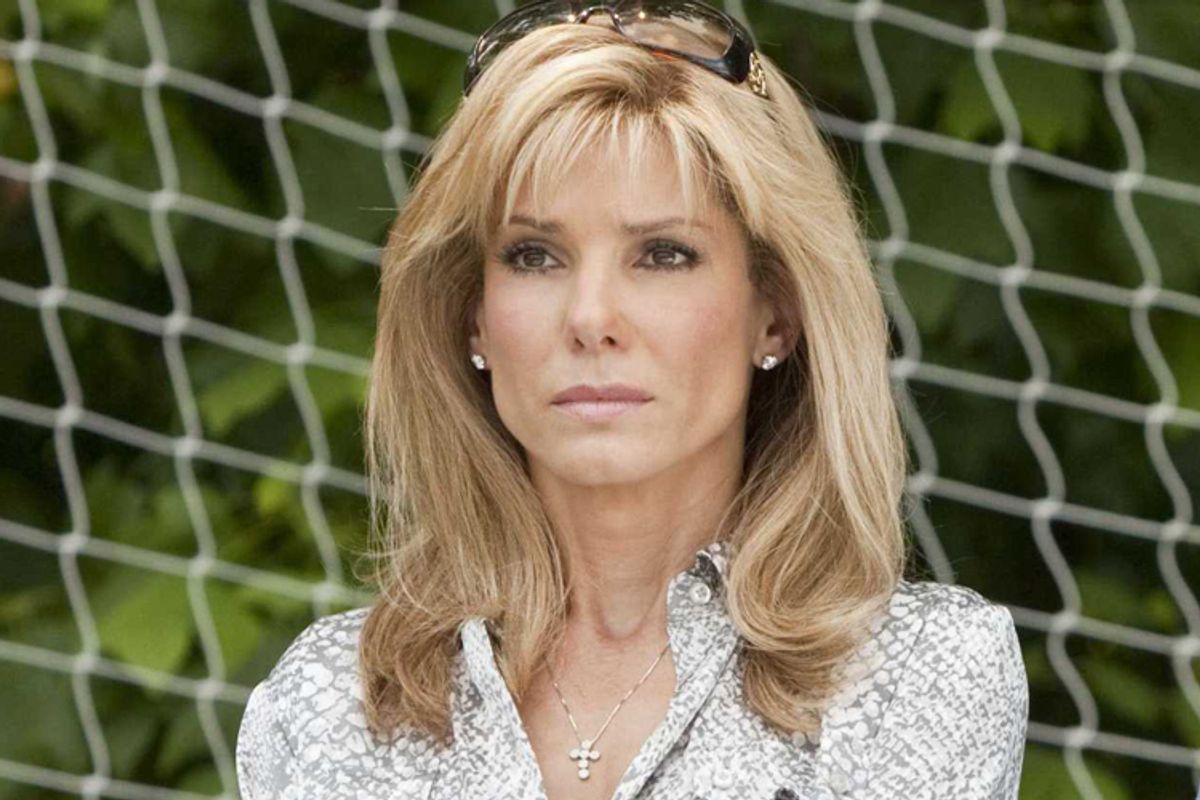 Sandra Bullock in "The Blind Side"
--

When it comes to thinking about what actors do and how they do it, my least favorite time of year is the four-week period between the Oscar nomination announcements and the actual awards ceremony. It's one thing to talk about the performances of the past year that delighted us, tickled us, intrigued us, distressed us or surprised us. But once those nominations have been slipped under our noses, pondering who might win the best-actor and best-actress awards practically invites snobbery. Part of the problem is right there in the second half of that too-often-used phrase "Oscar-worthy." "Worthiness" is one of those Puritan New England words that suggests a strict, immutable bond between hard work and concomitant rewards. There's only one best-actor and one best-actress Oscar per year. Therefore, the award should go to the performance that the greatest number of people can admit to admiring with the fewest equivocations or apologies. If a performer mastered a difficult accent, had a big, show-stopping monologue, or indulged in the kind of Shakespearean brooding that betrays a history of classical training, that increases his or her chances of being deemed -- by critics, by Oscar pundits, by the public -- as "deserving."

But so much of what's great in acting, as in life, happens in the margins. "Deserving" isn't the same as marvelous, thrilling, sexy, titillating, arresting, strange or discombobulating. It doesn't always allow for wonder or surprise or anger, or any number of complicated feelings that actors can draw out of us. And an actor who pulls off one of the hardest effects to achieve -- that of believable, extraordinary ordinariness -- is likely to get lost in the shuffle.

Which is why I'm here to give a big Texas cheerleader shout-out to Sandra Bullock in John Lee Hancock's "The Blind Side." The movie, based on the true story chronicled in Michael Lewis' book "The Blind Side: Evolution of a Game," details the rags-to-shoulder-pads rise of Michael Oher, a once-homeless African-American kid who was taken in by a Memphis mom and her family and who, with their help and encouragement, went on to become a top NFL draft pick. In the movie, the lumbering, gentle Oher -- his nickname, one that we learn he doesn't much care for, is "Big Mike" -- is played by Quinton Aaron, in a cautious and economical performance. Bullock is the Memphis mom, Leigh Anne Tuohy, a former Ole Miss cheerleader who lives extremely comfortably in a big house with her husband, a former star athlete himself (played by Tim McGraw), and her two children. She works (as an interior decorator), she raises her kids, and she engages in occasional fundraising activities with the other society ladies. She's blond (from a bottle, natch), she's peppy and she's a Republican. So what else do you need to know?

The trick, and the reason this is a performance worth paying attention to, is that Bullock gives us reasons to want to know. I've already heard and read too many critics talking about how "The Blind Side" isn't much loved by critics but has done extraordinarily well at the box office. The subtext is, "This is a movie for them, not us." That dismissiveness extends to Bullock's performance: In the week since the Oscar nominations were announced, more people have been interested in talking about Meryl Streep's performance in "Julie & Julia" (which, for the record, I also love, and I'll have more to say about it about in the coming weeks) than in what Bullock is doing here. The consensus seems to be that Bullock is just doing a slightly altered version of what she's always done: playing a likable, scrappy heroine, this time in a drama as opposed to a romantic comedy. To an extent that's true, insofar as all good actors use all the tools available to them. Bullock, who is 45, has built an extremely successful career playing the forthright-yet-vulnerable heroine, almost always in romantic comedies. (A notable exception was her 1994 breakout role in Jan de Bont's crazy-legs runaway-bus extravaganza "Speed.") She's one of the most financially successful Hollywood performers of her generation, and the fact that she can release three movies in one year -- the other two are the reasonably entertaining "The Proposal" and the true stinker "All About Steve" -- says something about her energy level.

But what Bullock does in "The Blind Side" is something new, built on things she's done before but also, I suspect, on amped-up angles of her own personality. To become as successful as Bullock is, we can assume that she must be, to varying degrees, a deal maker, a charmer, a hard worker as well as a hard-ass, and possibly -- we hope -- a fair boss. Bullock's Leigh Anne enfolds all of those qualities, and more. This isn't a case of an actor "playing herself," a weird charge often leveled at relaxed or unassuming performances (and one that presumes some intimate knowledge of the self in question). It's more a case, possibly, of an actor locating in herself the very things that make a character tick, an approach that ties into method acting (though this particular performance isn't "method" in any strict sense).

Bullock's Leigh Anne has a directness, a no-bullshit quality, that's softened by the glow of amusement that flickers in her eyes when Mike does something funny or surprising. On the first Thanksgiving Mike spends with the Tuohys, the family members come to the table to load up their plates before retreating to sit in front of the living room's two televisions. (Those two TVs are, by the way, a detail director Hancock just sets in front of us, without excessive underlining or quotation marks.) Mike is the only one who automatically sits down at the table to eat, presumably out of simple good manners, but also out of some idea of what Thanksgiving should be, drawn less from his own experience than from Norman Rockwell's "Freedom From Want." When Leigh Anne sees this, she smiles in a way that betrays her wonder at this decidedly old-fashioned display of gallantry and gratitude, and her eyes narrow just a little bit: "Who is this kid?" she's thinking. "Look at my little ingrate offspring, headed straight for the TV, and here's this gentleman who's all of a sudden appeared in my life." Her Leigh Anne might be too easily characterized as a woman who acts with her heart, but Bullock also shows us someone who thinks on her feet.

Bullock's voice here is commanding, a little nasal; it's Memphis belle, but there's a hint of barbecue in there too. That voice, that directness, are part of the texture of the performance: Bullock's Leigh Anne is a woman whose kindness is expressed not in showy, magnanimous gestures but in take-charge efficiency. Human decency so often demands instantaneous reaction; hesitation is the enemy.

That decisiveness extends to Bullock's carriage: She struts into a scary, other-side-of-the-tracks neighborhood in high heels and trim white jeans, not with a sense of entitlement -- she knows she's not welcome there -- but with a sense of purpose. She has work to do there, and the only thing that matters is getting it done. As a director, Hancock knows how important it is to pull back rather than move in -- he serves his performers quietly and skillfully, in ways that he hasn't been given appropriate credit for. When Leigh Anne pays a visit to Mike's mother -- an irresponsible sometime-drug addict who loves her son but has never properly cared for him -- she moves, at a crucial moment, from her chair to sit next to the distraught woman on the couch. Instead of moving the camera in for a close-up, Hancock keeps it at a remove that allows the whole image to sink in. Time and again, he lets the figures in the frame -- through their proximity to or their distance from one another -- tell the untellable parts of the story.

The response among people I've read and talked to since Bullock's nomination seems to amount to this: She's an actress people like, but they're more grudging about granting their respect. But I'd argue that playing an extraordinary everyperson comes with its own specific challenges and its own potential pitfalls. What Sandra Bullock does in "The Blind Side" is wonderful precisely because it doesn't reach for greatness. Instead it's built on the sturdy, reliable vocabulary of the ordinary.