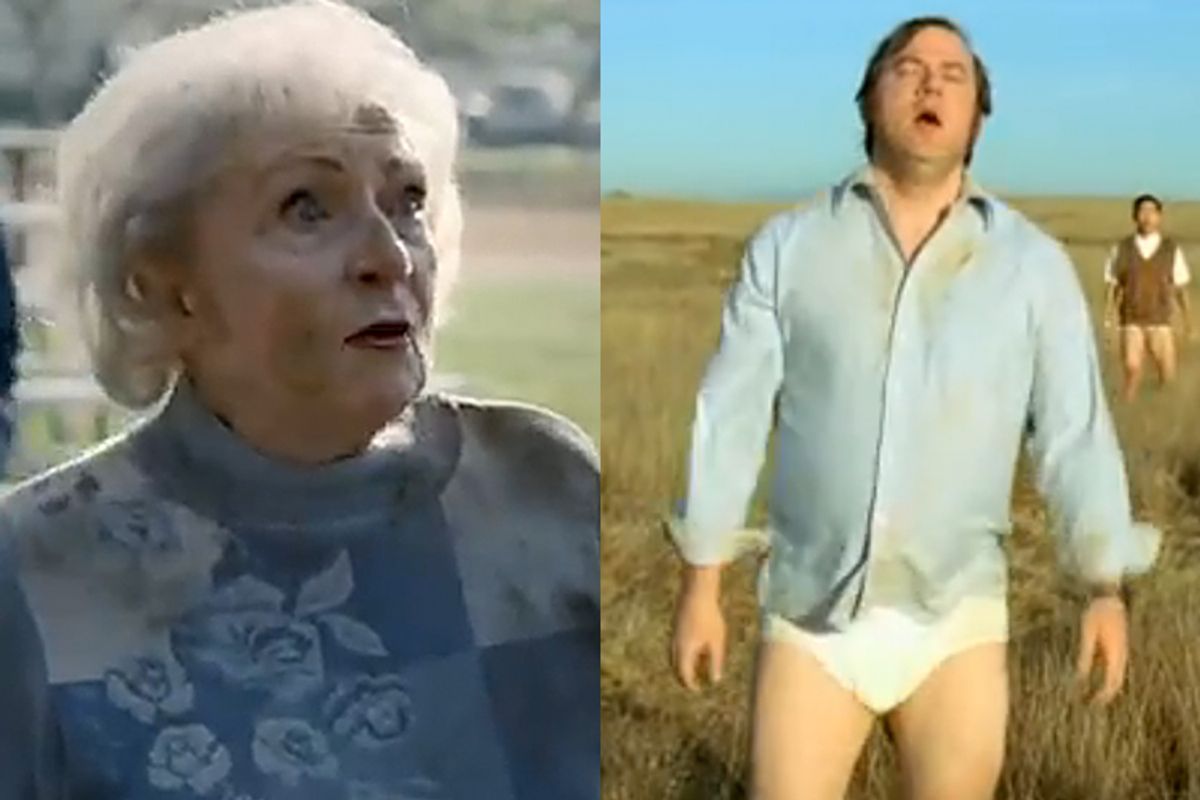 First, congratulations to the Saints. Second, guys, I am really sorry about your penises. You know, the ones we took away from you with our book clubs and our vampire TV shows. And while it's practically a tradition to get the lady knickers in a twist over that annual evening of misogyny punctuated with occasional outbreaks of football, really, I had no idea you were that angry. How angry? The Super Bowl hates females so much, even hens  and baby girls  aren't safe from scorn.

See, I know because I watched the game too -- women make up about a third of its audience. Believe it or not, we're actually capable of enjoying television events that don't revolve around snarking on Drew Barrymore's wardrobe choices. And we want to like the ads that accompany it -- those star-studded, memorably clever, funny and special effects-laden affairs that sponsors fall all over themselves to create for the edification of our captive eyeballs. Yet as I was brushing the cheese doodle dust off my shirt Sunday evening, I had one particular thought again and again -- somebody paid almost $3 million in airtime costs alone just to show us that?

This year's assortment provided a mix of familiar faces, expensive cars, a few laughs, and an all-time high of emasculated rage. Along the way, Mr. Burns went broke, the Griswolds reunited for one more disastrous vacation, and Vizio mashed up Beyoncé and "Chocolate Rain" in the world's most terrifying HDTV ad. Herewith the evening's standouts.

Snickers: You're Not You When You're Hungry

Proving yet again that anything involving Betty White is sprinkled with genius, this feisty, funny spot debuted early in the evening and remained unmatched by the end of it. The Golden Girl took a muddy pummeling in a football game, delivered a pitch-perfect "That's not what your girlfriend said," and, via the restorative power of chocolate and nougat, transformed back into a regular dude in time to return to the game. But oh-uh -- that guy playing like Abe Vigoda could use a pick-me-up. Living admirably up to the brand's catchphrase, Snickers satisfied.

Taking Bud's familiar motif of guys making crazy noises at each other and reinventing it for the vocoder generation, the beer spot was simple, silly, and clinched the deal for us when it trotted out T-Pain, looking to dip his chips in some guacamoh-oh-le.

In the space of a minute, a variety of search terms take an unseen protagonist from investigating studying abroad to a Parisian flirtation to a long-distance romance to a cross-continental relocation to wedding bells to one more sweet surprise. Google's ad boasted no famous pitchmen, no images anyone with a Web browser wouldn't know intimately, and such was its charm and power. By turning our routine search engine trawling into a romantic narrative, Google reminded us of how grandly efficient it truly is in abetting the curiosity and adventurousness in all of us.

What was the VW invented for if not an excuse to jab friends and family? A series of unlikely punch buggers -- from cops to Amish farmers to party dudes to a woman in the throes of labor --  slam each other to the familiar refrain of "Red one!" "White one!" A playful ode to a road trip rite of passage -- and a final payoff that's priceless.

Kia's toys-gone-wild spot takes our healthy skepticism of the emancipating powers of an SUV and turns it on its head. A posse of oversize playthings hit the open road in the Sorrento, where they get in hot tubs, ride mechanical bulls and party in Vegas. It may seem a weird way to sell "a departure from the expected," but anything involving a sock monkey getting a tattoo and a robot doing the robot is indeed just that.

More robot love, this time from Intel, where a worker enthusing in the cafeteria about how their new technology is "the greatest thing we have ever made" leads to hurt feelings for one wide-eyed hunk of plastic. Poor Jeffrey, upstaged by a core processor.

Heads up, it's a dude having dudeness snatched from him by the evil vagina! Jason's "girlfriend has removed his spine," subjecting him to the indignities of underwear shopping and lavender sniffing. But there's hope. Jason can excuse himself from an actual experience with a real woman any time, anywhere now, and watch the game on FloTV. Now he can "change out of that skirt" and be an asshole on the go. Thanks, FloTV!

But what will happen to our friend Jason when he takes off the skirt? He will join his pants-free brethren wandering free in the wilderness, that's what. He will sing, "I wear! Wear! No pants!" Then, he will heed the rebel yell of Docker's, which is "calling all men to wear the pants." And we at home will all throw up a little at what happens when dorks and khakis try to go Braveheart.

"I will shave. I will clean the sink after I shave. I will be at work at 8 a.m. I will be quiet when you don't want to hear me say no. I will take your call. I will listen to your opinion of my friends. I will put the seat down. I will carry your lip balm." Oh you will, asshole? Wow, I didn't realize being a grown-up was soooo challenging. And as you glumly stare at the camera until your eyeballs look like they're about to explode, all you demand is that you can zoom around to some fucking James Bond music in your dumb Dodge as you boldly take "Man's! Last! Stand!" Way to stick it to us. The Charger: delusional masculinity's reward for having to put the toilet seat down.

Bridgestone: Your Tires or Your Life

But what does a manly, Dodge-driving man need to complete his masculine crisis mobile? Tires, of course.

A high-speed, rain-drenched car chase leads to a roadblock and a passel of freaky-looking ultra villains. "Your Bridgestone tires or your life," the head honcho barks toward the mystery car, leading the driver to acquiesce -- by kicking out a beautiful babe and peeling off. See? The driver thought he said, "wife" not "life"! It's funny because a Bridgestone driver would rather surrender a woman than his tires. It is to laugh! Hey, I sure hope that guy doesn't wind up in a fiery crash in that storm! Because that didn't wishfully occur to me at all.

Ah, now here's what ladies are good for in ads -- sitting around in bubble baths taking pictures of themselves. And when the super babe muses what would happen if she sent her kissy duckface out into the world, chaos ensues. Sparks fly, ladders are fallen off, bedroom doors are locked, and somehow, flamingly gay stereotypes start slapping each other. (There was further hot chicks and laughing at homos action from GoDaddy too.) Yes, in short, the world would run amok, because Megan Fox naked is so totally something we've never seen before.

In keeping with the theme that men are loath to do anything that doesn't involve sitting around and/or stuffing their faces, a gentleman fakes his own death so he can hole up in a "jumbo casket full of Doritos" and watch TV. Live the dream, you malingering, Nacho Cheese-flavored Doritos noshers. Maybe next time they can entomb you in your Dockers and Dodge Charger.

Such is the siren call of Coke -- it pulls a man from bed and across the veldt, past stampedes and snakes and cliffs, just to get some of that magical elixir. Even the monster hit of caffeine in it can't wake this guy. Coke: It's what to drink when you're not even conscious.

Come with us to a distant world ... The future! In a decade, Brett Favre will be pushing 50 -- clutching a hologram MVP award. And the warranty on the Hyundai you bought back in the days before we all lived in Favretopia? Still good.

A cheesy guy in a cape leads a Marine World-like team of humans through a hoop-jumping, crowd-pleasing routine, rewarding his barking menfolk with nuts and popcorn. Does that make you want to eat those things? How about the tag line "Awesome + awesome = awesomer"? You can almost hear the money hemorrhaging from the agency that came up with that one.

David Letterman and Oprah Winfrey, reprising their 2007 ad for "Late Night," once again take to the couch. This time, however, it's the "worst Super Bowl party ever," because there's an unwelcome guest on the end -- Jay Leno. You could give Leno good sportsmanship credit for shilling for his rival's show if the whole thing didn't look so tense and cranky anyway.

Focus on the Family: Tim Tebow

Tracy Clark-Flory has more to say on this in Broadsheet, so I'll just add my two cents: Weirdest eHarmony ad ever.