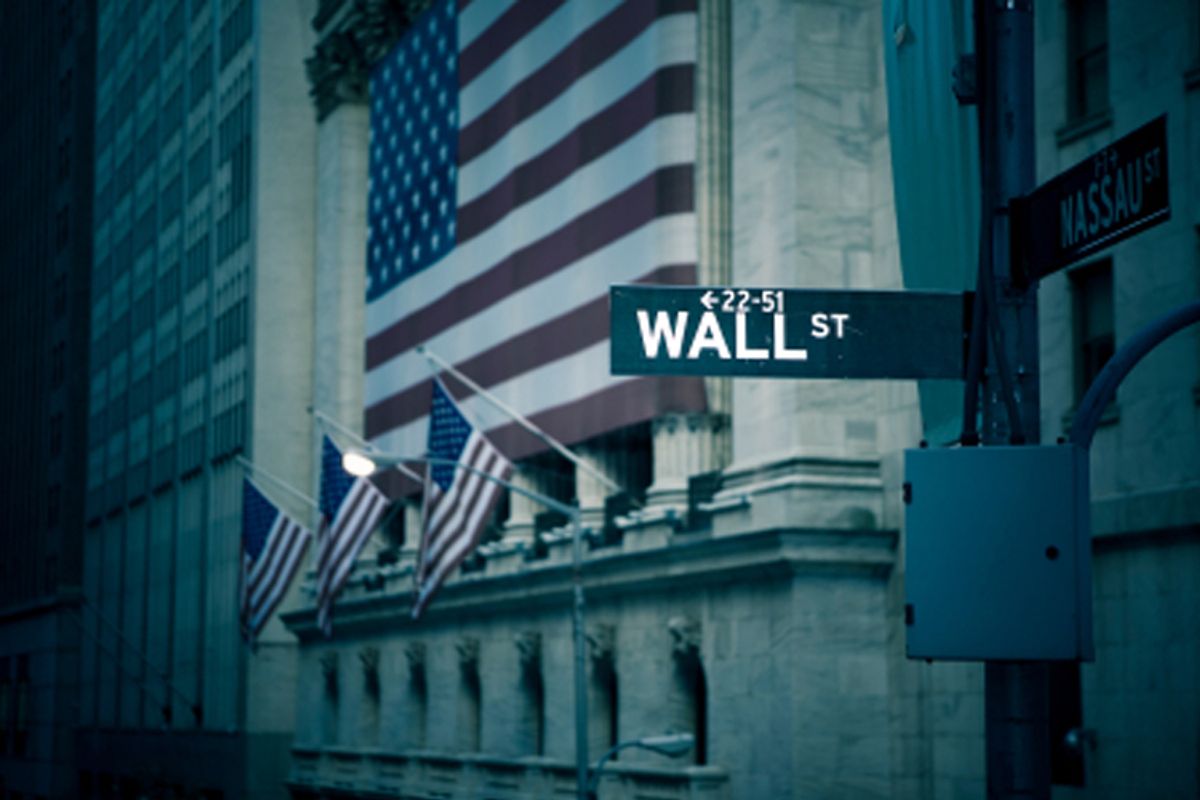 Political science professors could require students to read this article from today's New York Times and little else would be needed to convey the essence of the American political system.  The article describes how Wall Street -- which poured massive amounts of money into the Obama campaign and the Democratic Party over the last several years, ensuring unparalleled access and influence -- is now threatening to support the Republicans if Obama keeps saying mean things about them.  Wall Street executives are angry that, after duly purchasing the Democrats (they have receipts and everything), the Obama White House is now rousing the dirty rabble with their anti-banker rhetoric:

Republicans are rushing to capitalize on what they call Wall Street’s "buyer’s remorse" with the Democrats. And industry executives and lobbyists are warning Democrats that if Mr. Obama keeps attacking Wall Street "fat cats," they may fight back by withholding their cash.

"If the president doesn’t become a little more balanced and centrist in his approach, then he will likely lose that support," said Kelly S. King, the chairman and chief executive of BB&T. Mr. King is a board member of the Financial Services Roundtable, which lobbies for the biggest banks, and last month he helped represent the industry at a private dinner at the Treasury Department.

"I understand the public outcry," he continued. "We have a 17 percent real unemployment rate, people are hurting, and they want to see punishment. But the political rhetoric just incites more animosity and gets people riled up" . . . "If the president wanted to turn every Democrat on Wall Street into a Republican," one industry lobbyist said, "he is doing everything right."

There are numerous points to note about all of this.  First, there simply is no more odious faction inside the U.S. than Wall Street bankers -- and that's saying quite a bit.  Just over a year ago, they almost caused a complete global economic collapse -- and did cause extreme economic suffering around the world which continues to this day -- with their sleazy, piggish and lawless behavior.  Yet barely a year later, they now turn around and threaten their purchased politicians with punishment if their behavior is meaningfully restricted or even if they're publicly criticized.  In light of what they did -- and are still doing -- they should consider themselves lucky that the public hasn't stormed their homes and offices in mass rage.  Far less pernicious behavior has triggered such uprisings in the past, and if the American public hadn't been as ingrained with the passivity and learned helplessness they've been trained to accept, one would certainly have seen some of that.  In a rational, democratically engaged society, multi-million dollar taxpayer-enabled banker bonuses, combined with mass unemployment and home foreclosures (combined with establishment threats to reduce Social Security and Medicare), is not the ideal means for maintaining social order.

Second, stories like this ought to put to rest forever the notion that the Republican Party is some sort of haven for populist anger.  As subservient as the Democrats have been to Wall Street -- note that, more than a year later, Wall Street can only complain about "rhetoric," not any actual legislation that has been passed -- the Republicans are out there promising Wall Street to be even more loyal servants if they're given the dog treats that have recently been going to the Democrats:

Senator John Cornyn of Texas, chairman of the National Republican Senatorial Committee, said he visited New York about twice a month to try to tap into Wall Street’s "buyers’ remorse." "I just don’t know how long you can expect people to contribute money to a political party whose main plank of their platform is to punish you," Mr. Cornyn said.

So the GOP is out there successfully pretending in front of the angry tea partiers that they, too, are furious about Wall Street's gorging and domination of Washington, all while simultaneously crawling to Wall Street and pledging to be good little boys and girls -- and to keep the agitated masses at bay -- if Wall Street once again purchases them rather than the Democrats.  The only thing more absurd than the Democrats' pretending to be the Populist Party of the People is the Republican Party's doing so.

Third, that Wall Street is dissatisfied with the Democrats and the Obama administration reveals how extreme are their expectations of control of the Government.  The second-highest-ranking Democratic Senator, Dick Durbin, recently conceded of the Democratic-controlled Congress:  "frankly, bankers own the place."  It's impossible to find a more loyal and attentive servant to bankers than Obama Treasury Secretary Tim Geithner.  As the NYT article this morning details, Wall Street executives and their lobbyists have virtually unfettered access to the administration and to the President himself.  You would think they'd be satisfied with the state of affairs in Washington.  Yet so extreme are their perceived entitlements of control that even mere symbolic and rhetorical disobedience from the politicians they own -- he said some mean things about us -- creates a sense of righteous grievance:  our government employees do not behave this way toward us and will be punished if it continues.

Finally, marvel at the cowardice, as well as the journalistic shoddiness, evident in these anonymity-based passages:

The expectation in Washington is that "We can kick you around, and you are still going to give us money," said a top official at a major Wall Street firm, speaking on the condition of anonymity for fear of alienating the White House. "We are not going to play that game anymore." . . .

"If the president wanted to turn every Democrat on Wall Street into a Republican," one industry lobbyist said, "he is doing everything right."

In essence, Wall Street executives said to David Kirkpatrick, the NYT reporter who wrote this story:  "I want to threaten and criticize the President, but I'm too much of a coward to do so with my name attached, so will you let me do it in your paper anonymously"?  And Kirkpatrick replied:  "Oh, absolutely; that's what anonymity is for:  to let the country's most powerful people spew venom and issue threats while being shielded and protected by journalists from accountability."  Perhaps one of those nameless executives might have inquired of Kirkpatrick:  "but didn't your newspaper publish very stringent guidelines limiting the use of anonymity in the wake of the Iraq debacle?", to which Kirkpatrick could easily and truthfully have replied:  "oh, those?  Please.  Nobody worries about that, least of all us.  That's just there to placate the same angry rabble whom you're now ordering your political property to more efficiently pacify."