The CNBC talk show host has been spectacularly wrong on the economy for years. He obviously belongs in Congress 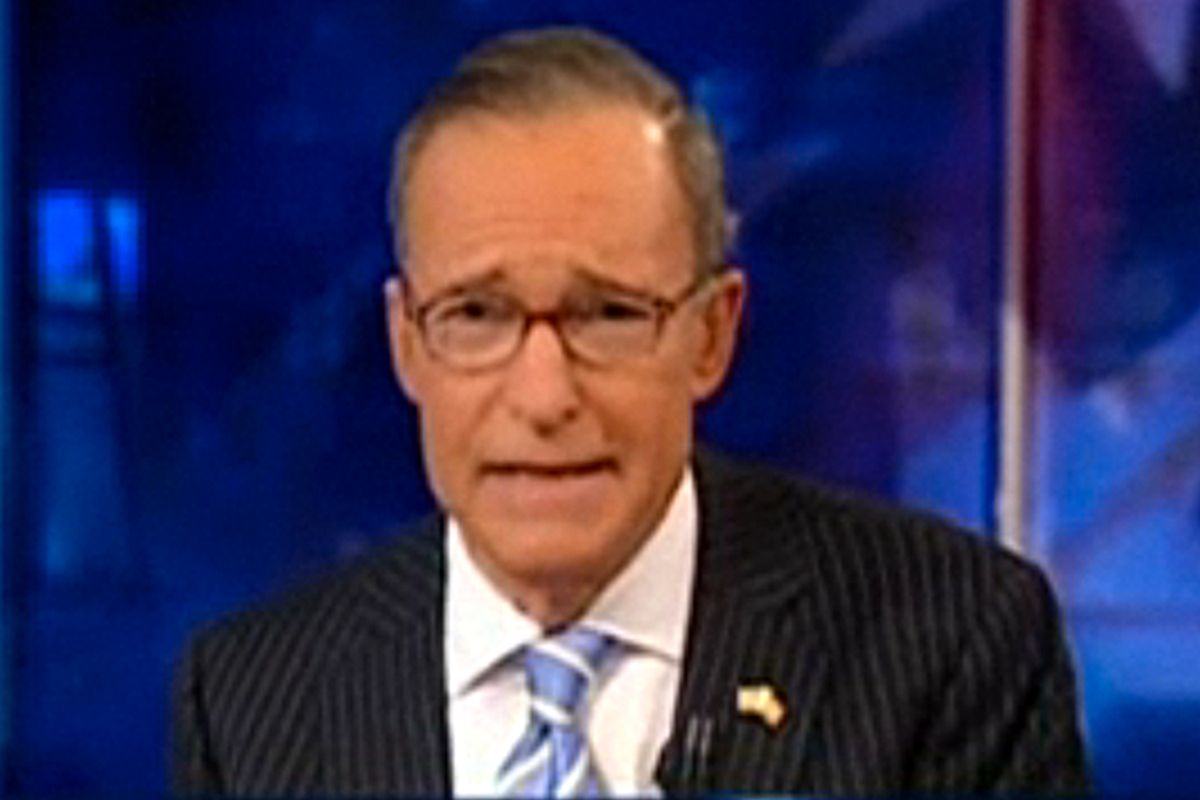 Could we really be so lucky? CQ Politics is reporting that "the movement to draft CNBC host Larry Kudlow to run against Sen. Charles Schumer (D-N.Y.) is charging full-speed ahead." A nation of econobloggers and political reporters holds its breath (and poison pen) in feverish anticipation.

It's not just that the prospect of an inveterate anti-tax, pro-supply-side ideologue with high name recognition running for the Senate in the media capital of the world would be the equivalent of a massive jobs stimulus plan targeted directly at the beleaguered news business. There's also the fun to be had detailing how one man could so consistently be so wrong when discussing his supposed specialty: the economy.

Of course, many, many people have been proven wrong over the last few years when asked to forecast the direction the economy is headed. Treasury secretaries, Federal Reserve chairmen, the CEOs of Wall Street's biggest financial institutions ... Pretty much everyone got something wrong at some point. But I defy you to find someone more spectacularly wrong, from the outset of the financial crisis right up to last month, than Larry Kudlow.

Our story begins in the summer of 2005, when Kudlow offered his thoughts in National Review on the sustainability of the housing boom in "The Housing Bears Are Wrong Again." The opening paragraph will live in infamy:

Homebuilders led the stock parade this week with a fantastic 11 percent gain. This is a group that hedge funds and bubbleheads love to hate. All the bond bears have been dead wrong in predicting sky-high mortgage rates . So have all the bubbleheads who expect housing-price crashes in Las Vegas or Naples, Florida, to bring down the consumer, the rest of the economy, and the entire stock market.

For those whose memories are short, let us review: The end of the boom and the collapse of the housing market did bring down the consumer, the economy, and the stock market, and would have sent most of the nation's biggest financial institutions into bankruptcy were it not for massive government intervention.

Kudlow's reason for optimism: Since the early 1970s, demand for homes had "far outstripped the supply of newly built residences." But as the (almost never wrong) blogger Calculated Risk pointed out three years later, Kudlow even managed to get that part cockeyed. From 1970-2005 "There were significantly more housing units built (57 million starts)... than new households formed (44.6 million)..."

Fast forward a year and a half, to December 2007, by which point the question of whether the housing boom was sustainable had been thoroughly settled. Now the question was: Whither the greater economy? Blogging at National Review's the Corner, Kudlow was definitive:

There is no recession. Despite all the doom and gloom from the economic pessimistas, the resilient U.S economy continues moving ahead -- quarter after quarter, year after year -- defying dire forecasts and delivering positive growth. In fact, we are about to enter the seventh consecutive year of the Bush boom....

There's no recession coming. The pessimistas were wrong. It's not going to happen ... Yes, it's still the greatest story never told.

The National Bureau of Economic Research later determined that the recession officially began in December 2007.

It gets better: In July 2008, Kudlow called a housing bottom. Wrong. That same month, he also declared:

"Phil Gramm was right: We are in a mental recession, not an actual recession. And the low-tax, free-trade, free-market, capitalist economy is a whole lot more resilient and durable than the pessimistas and declinists would have us believe."

In September 2008, the month that the economy effectively collapsed, Kudlow posted a prediction that falling oil prices would serve as a "tax cut" that would "solve" the problem of weak consumer purchasing power. That, in turn, would boost the overall economy and "for those of us who prefer to look ahead, through the windshield, the outlook for stocks is getting better and better." Incredibly, amazingly, almost hysterically wrong.

(In the same post, Kudlow also predicted that Sarah Palin would strengthen McCain's presidential campaign. Maybe we'll give him that one.)

We could go on. Searching the Internet for instances of Kudlow's wrongness is an exhausting task -- there's too much material to properly filter. But just as a coda, let's note that just last December he predicted a mini-boom in the stock market and declared that "there's a lot of upside left" in the rally that by that point had been cruising along for nine months. Of course, the market promptly tanked.

There are other reasons to find Kudlow's candidacy risible (not least of which is the revelation, per a post by Salon's new news editor, Steve Kornacki, that the Draft Larry Kudlow Committee's finance chairman is John Lakian, who has his own notorious troubled relationship with the truth). But one must still concede that a political career for Kudlow is not inconceivable. He worked in the Reagan White House, was chief economist at Bear Stearns, and was considered a rising conservative star before revelations of drug and alcohol abuse put him on the sidelines in the early '90s. His signature policy prescription -- cut taxes for everyone and everybody, in every situation, as a cure for every ill -- is standard Republican orthodoxy, so he'd fit in quite well with the current GOP.

So go ahead tea partiers: Draft Kudlow! New York's had a rough couple of years. The state deserves some fun.