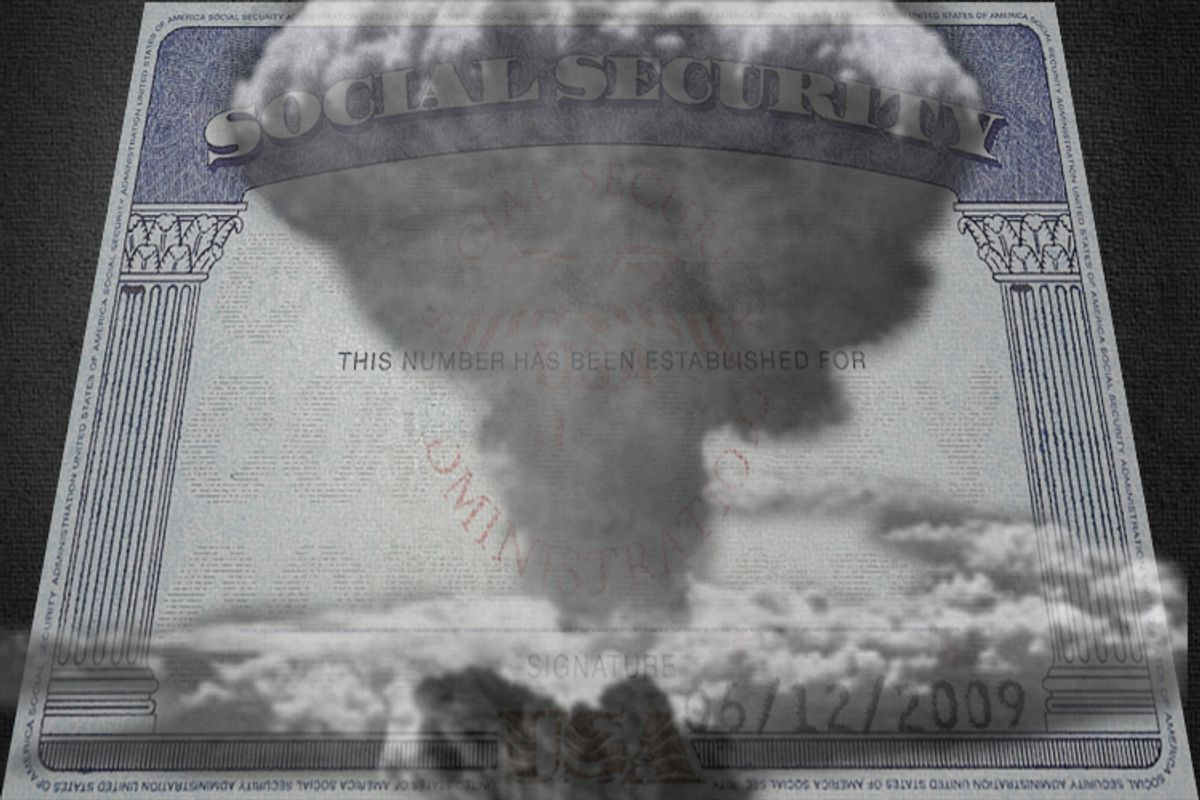 Who said the Republican Party lacks a bold vision for governing America in the 21st century? Sarah Palin and Republican congressman Paul Ryan prove that Republican conservatives are bold to a fault.

On "Fox News Sunday," where the former Republican vice-presidential candidate is now a paid commentator, Palin suggested that Obama might be likely to win reelection if he "played the war card."

Palin says that declaring war on Iran or showing stronger support for Israel might convince voters that Obama is tougher than they think on national security and doing all he can to protect the U.S. Otherwise, according to Palin, Obama won't be re-elected if he continues on his current path.

As if the Obama administration were not escalating the war in Afghanistan against the Taliban, who aided and abetted the al-Qaida attacks on the U.S., while continuing the war in Iraq, which had nothing whatsoever to do with 9/11.

As if invading two countries that did not attack the U.S., Iran and Iraq, would be more statesmanlike than merely invading and occupying one.

As if the public, sickened by the cost of the Iraq war in American dead and maimed and trillions of dollars in the long run, had not turned against wingnut militarism and tossed Palin's party out of Congress back in 2006.

As if swing voters were concerned, not about the highest levels of unemployment since the Great Depression, but about what they considered to be too few American military deaths abroad.

But the contemporary right's claim to intellectual dynamism is not limited to Sarah Palin's suggestion that another unnecessary, unprovoked war in the Middle East might be good policy as well as a a good idea. In domestic policy, Paul Ryan, R-Wis., the ranking Republican on the House Budget Committee, recently unveiled an alternative budget that would deal with the long-term deficit problem (about half of which was caused by Bush's and the Republican Congress's wars and tax cuts) by privatizing Social Security and turning Medicare into a voucher system.

That's what Americans are demanding, Rep. Ryan. Millions of Americans are not content to have lost much or all of their 401K and other private retirement savings in the stock market in the last decade, with nothing but Social Security remaining to rescue them in their retirement years. No, Americans are angry because they weren't allowed to lose all of their Social Security money, as well, in the stock market. Clearly they are angry because Wall Street brokers aren't able to rake in commissions from middle-class and working-class retirees by flipping stocks bought with diverted Social Security funds. The bailouts to Wall Street were not enough. We need to give the rent-seeking bankers the vast funds of Social Security as well and let them charge us fees for "managing" it with the legendary expertise we all know and admire.

These ideas are not going to bring the Republican Party back to power in Congress in 2011 or into the White House in 2013. Which is not to say that the Republicans can't come back to power. In a two-party system, frustrated voters could vote the out party back in, while ignoring the out party's message, even if the message is as crazy as "Bomb Iran and privatize Social Security."

If they came back in, would the Republicans bomb Iran and privatize Social Security? Almost certainly not. Bush talked tough about Iran but didn't do anything. (Correction: He accidentally promoted a major goal of Iranian foreign policy, by deposing the minority Iraqi Sunnis detested by Iran and bringing the Iran-supported Shia to power in Iraq. Oops).

Nor are the Republicans likely to privatize Social Security. A few years back, the Republicans controlled both houses of Congress and the White House and a freshly reelected Republican president made partial Social Security privatization a major part of his second-term agenda. Result? The very idea of channeling Social Security savings into the stock market was so unpopular with Republican voters -- forget Democrats -- that the central domestic policy initiative of the conservative movement for the last 30 years was not even brought to a vote in either house.

So there is little or no chance that even under a Republican president the U.S. will declare war on Iran or privatize Social Security. These are not serious policy proposals. They are just lollipops for the Limbaugh listeners. Boob bait for Bubba.

The Republicans have specialized for a generation now in running as radical right-wing revolutionaries and then, once in power, governing on behalf of their K Street lobbyist friends, until the next election, when, for a few weeks, they are leading the American Revolution or World War II all over again until Election Day.

Eric Hoffer observed that movements tend to turn first into businesses and then into rackets. The racket side of the Republican machine is illustrated by a New York Times story about Sen. John Cornyn, R-Texas, chairman of the National Republican Senatorial Committee. Cornyn visits New York twice a month to take advantage of Wall Street's "buyers' remorse."

Buyer's remorse is what the voters should feel when they vote for a party that promises a bold reform agenda and then acts between elections as though it were a lobby for the financial industry. But wait -- which party are we talking about here?