Markos Moulitsas is writing a book, The American Taliban, which compares various aspects of the American Right to radical Islam (e.g., their obsessions with judging and controlling other people's sex lives, their religious fanaticism, their views of gender equality and the like).  National Review Editor Rich Lowry finds this very upsetting, and he said the following during a chat yesterday with Ana Marie Cox (who, just by the way, appears to be eagerly auditioning for a role as a Fox News Democrat, as she assured Lowry that Markos is "to the far left of me"; agreed that a recent Daily Kos poll showing the extremism of the GOP rank-and-file was terribly unfair and misleading; and found Moulitsas' thesis to be "incredibly inflammatory and extremist," which prompted the sought-after "reasonable liberal" head-pat from Lowry:  "you're on a roll; keep agreeing with me"):

LOWRY: When we're talking about extremism, and you're going to do a survey highlighting the extremism of the other side, when you're working on a book called American Taliban, which - in your own words - catalogs the ways in which modern-day conservatives share the same agenda as radical jihadists in the Islamic world - I mean, who's the extremist here?  That is obviously a ridiculous [sic] --  . . . . So you agree Kos is an extremist . . . . In my mind, only an extremist says:  the other side in the American political discussion, shares the same agenda as radical jihadidsts.

Does Rich Lowry know that the most promoted writers at his magazine have published books like these, along with these self-descriptions: 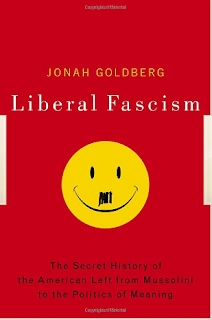 "In this provocative and well-researched book, Goldberg probes modern liberalism's spooky origins in early 20th-century fascist politics. With chapter titles such as Adolf Hitler: Man of the Left and Brave New Village: Hillary Clinton and the Meaning of Liberal Fascism -- Goldberg argues that fascism has always been a phenomenon of the left." 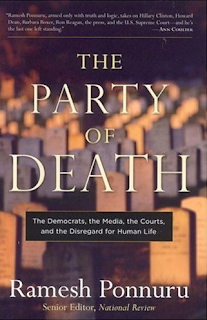 "Is the Democratic Party the 'Party of Death'? If you look at their agenda they are. IT’S NOT JUST abortion-on-demand. It’s euthanasia, embryo destruction, even infanticide—and a potentially deadly concern with 'the quality of life' of disabled people. If you think these issues don’t concern you—guess again. The Party of Death could be roaring into the White House, as National Review senior editor Ramesh Ponnuru shows, in the person of Hillary Rodham Clinton." 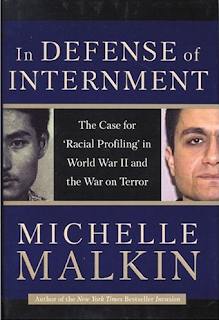 "This diligently documented book shows that neither the internment of ethnic Japanese--not to mention ethnic Germans and Italians--nor the relocation and evacuation of Japanese Americans from the West Coast were the result of war hysteria or race prejudice as historians have taught us."

And that's to say nothing of the various books of Ann Coulter -- whom Lowry denied was an extremist while allowing that "she's said some extreme things" -- which have called liberals Godless Traitors and the like.

I know it's not news that Rich Lowry is an intellectually dishonest hack.  And I also know it's not news that the brain of right-wing authoritarians allows its host to blithely accuse others of exactly that which they do.  Still, as common as it is, there are times when I'm amazed at how compartmentalized and self-blinding the human brain can be.

Shouldn't a normally functioning brain send a signal to Lowry along the lines of:  "You can't complain that it makes someone an 'extremist' to compare 'the other side in the American political discussion' to Islamic radicals because one of your magazine's Senior Editors just recently wrote a book comparing liberals to Nazis, and another one of them wrote a book calling them the Party of Death?  Forget intellectual honesty; just as a strategic matter, in order not to expose yourself as a wildly dishonest and hypocritical polemicist, shouldn't the brain intervene and at least tell the person that they should alter their criticisms so it's not blatantly attacking exactly what their closest comrades do?  Yet somehow, the brain never sends that signal -- or it never gets received -- and people like Rich Lowry can sit there with a straight face and attack someone for doing exactly that which his own writers do, without any apparent recognition of that fact at all.  If nothing else, it's a wonder to behold as a biological and psychological phenomenon.

I'll also be on The Young Turks later this week discussing Citizens United with Law Professor Larry Lessig, who wrote this thoughtful critique of the arguments I made.

(2) Several months ago, the excellent Obama Pentagon aide in charge of detention policy -- former Army Capt. Philip Carter -- abruptly resigned shortly after the administration announced it would indefinitely detain many Guantanamo detainees and send others to military commissions:  policies which Capt. Carter long opposed when embraced by Bush (though it's unclear whether there was a causal connection between those policies and his resignation).  As Spencer Ackerman reports today, the administration has now replaced Capt. Carter:  with Col. William Lietzau, who -- as Ackerman put it -- "previously served as a special adviser to Jim Haynes, the top Pentagon lawyer during Donald H. Rumsfeld’s tenure, when Rumsfeld and Haynes codified torture and indefinite detention as hallmarks of Bush-era terrorism policy" (h/t Jim White).  Given that Obama's top "terrorism adviser" was a Bush-era CIA official who cheered for various torture and rendition policies, and given that Obama detention policies are so closely modeled after the Bush/Cheney/Rumsfeld approach (indefinite detention, military commissions, denial of habeas corpus, renditions), this is both an unsurprising and an appropriate choice for that position.

Bush officials who helped design the torture and detention regime aren't prosecuted or even held accountable under Obama.  Instead, they're hired, empowered, relied upon and promoted.

UPDATE: For those interested, Sadly No's HTML Mencken comprehensively chronicled Lowry's extremism here and here.  The latter post contains not only his defense of Ann "not-an-extremist" Coulter ("A spectacularly successful author, Ann Coulter is not crazy, although her argumentative brilliance can be tinged with intemperance"), but also his truly disturbed rants on masculinity, Regular Guys and war.

UPDATE II: Lowry:  "In my mind, only an extremist says: the other side in the American political discussion, shares the same agenda as radical jihadists." 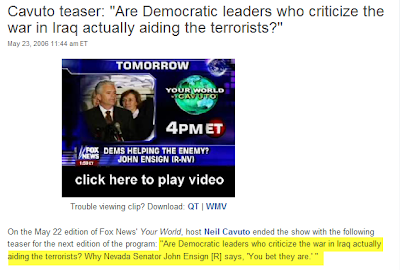 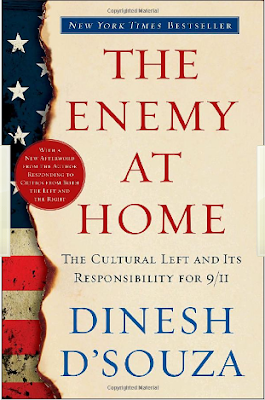 I wonder in which part of Rich Lowry's mind the recollection of these books is stored?  Or are they just deleted altogether?   Or is it that anyone on the Right is inherently non-extremist no matter how perfectly they adhere to his definition of "extremism"?

UPDATE IV:  On October 17, 2007, Thomas Smith, writing in National Review, approvingly quoted Whalid Phares, explaining that anti-war liberals have formed an alliance with radical Islam to destroy the U.S.:  "the Reds (neo-Left) and the Dark Greens (Islamists) are conducting a joint offensive against both democracy-pushing America and the democracy-craving Middle East [...] the so-called "mass demonstrations" in the West since 2002 [...] are an important component of the War of Ideas against democracy" (h/t sysprog).  In the April 16, 2009 edition of National Review, Cliff May explored what he called the "the burgeoning Left-Islamist alliance," an "unholy alliance" between Leftists and Islamic Radicals (h/t Chris Sinnard).

Have I mentioned yet that that magazine's Editor-in-Chief, Rich Lowry, believes that "only an extremist says: the other side in the American political discussion, shares the same agenda as radical jihadidsts"?

UPDATE V:  Rich Lowry -- who thinks it's terribly wrong and extremist to compare one's American political opponents to evil foriegners -- said the following about Jonah Goldberg's book, which compared American Liberals to Nazis:  it's a "brilliant new book" and:  "Let me join those who have been praising Jonah's book, which I wrote about today. It is extraordinarily impressive, both deeply researched and wonderfully written."  About Ramesh Ponnuru's book branding Democrats "The Party of Death," Lowry wrote:  "Let me join those who have praised Ramesh's new book. I read it about a month ago and was blown away by it. It will be a classic. I defy anyone to read it and not come away illuminated. This is polemical writing at its very best -- brilliant, fair-minded, and ultimately absolutely devastating."