The race is on for Murtha's seat

An intriguing name on the Democratic side. And fears of a repeat of NY-23 for Republicans 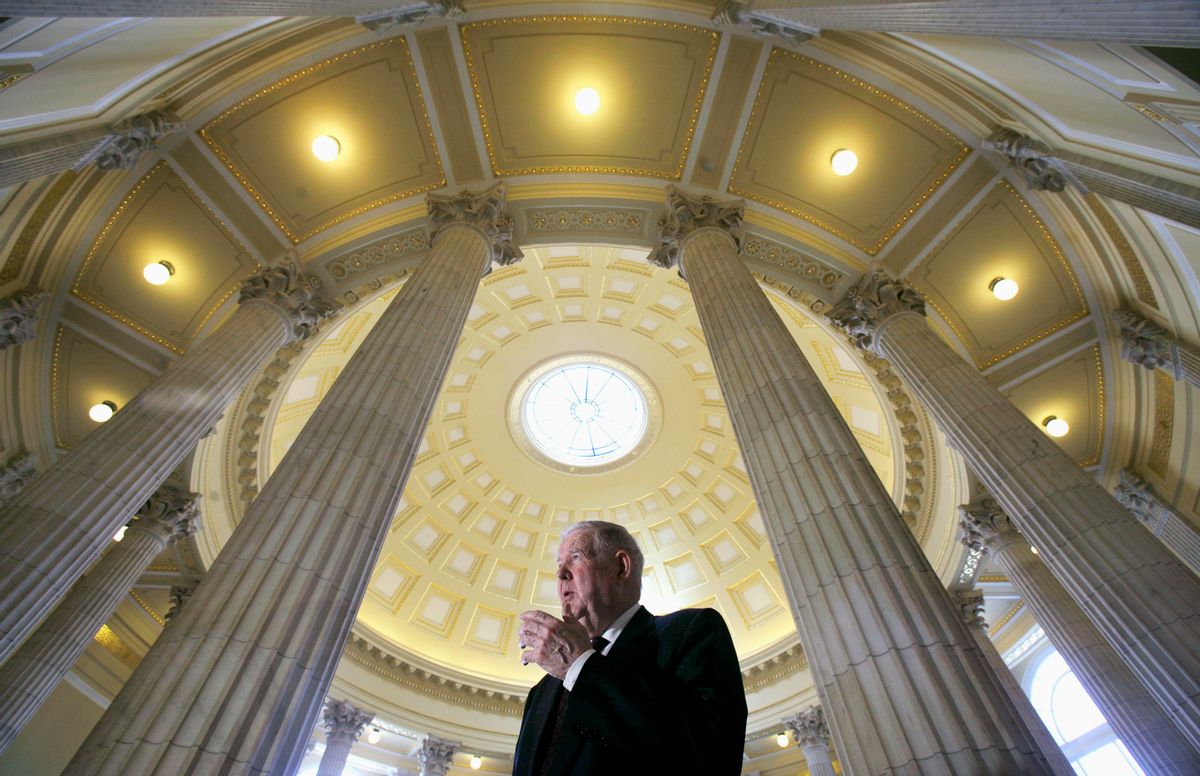 U.S. Rep. John Murtha (D-PA) is seen on Capitol Hill in Washington March 19, 2007. Murtha has been an outspoken opponent to the war in Iraq, which marked its fourth anniversary today. REUTERS/Jim Young (UNITED STATES) (Reuters)
--

John Murtha's death Monday has Democrats and Republicans scrambling to find candidates for a special election in the ultimate swing House district -- Pennsylvania's 12th, the only one in the nation that voted for John Kerry in 2004 and John McCain in 2008.

Funeral arrangements haven't been finalized yet for Murtha, the longest-serving House member in Pennsylvania history, and few political operatives would talk on the record about exactly how to replace him, out of respect for a local legend. But each party is looking at a few names for an election where insiders -- not primary voters -- will pick the candidates.

On the Democratic side, talk is focusing on former Lieutenant Gov. Mark Singel, of Johnstown, Pa.; state Sen. John Wozniak, who has represented the area in Harrisburg since winning a state House seat in 1980; Murtha's chief of staff, John Hugya; and possibly his son, John M. Murtha.

Party leaders -- and not primary voters -- will choose the Democratic candidate. The 56-year-old Singel, a one-time rising star who's been off the political stage for more than a decade, might be the most intriguing prospect. Running with Robert Casey, he was elected lieutenant governor in 1986, the position from which he launched a U.S. Senate bid in 1992. But in the Democratic primary, Singel fell in one of the biggest surprises in Pennsylvania political history to Lynn Yeakel. After losing to Tom Ridge in the race to succeeed Casey in 1994, Singel left the arena, ultimately settling into the lobbying world.

Hugya might be handicapped by the low profile nature of his work on Murtha's staff. Aides who have sought to replace their bosses in Congress have a spotty track record at best. In 2006, for instance, the retiring Martin Sabo's chief of staff, Mike Erlandson, lost the Democratic primary in Minnesota's Fifth District to Keith Ellison by ten points.

Republicans, who were already planning to challenge Murtha aggressively in the fall, have at least two candidates interested -- local businessman Tim Burns, a political newcomer who a GOP aide says is enrolled already in the National Republican Congressional Committee's "Young Guns" recruiting program, and Bill Russell, who lost to Murtha by nearly 16 points in 2008, even as McCain won the district narrowly.  The GOP nomination will also be decided by party leaders.

Gov. Ed Rendell, a Democrat, hasn't yet announced when the special election will be; he has 10 days from Monday to make a decision. Most observers expect him to pick May 18, already the date for a statewide set of primaries, to save the cash-strapped state a little money. That might give Democrats an edge, because a contested Senate primary between incumbent Arlen Specter and Rep. Joe Sestak could drive up turnout. "It's an uphill climb in a lot of ways," one national Republican says. State laws for a special election give the power to pick candidates to party officials, without a primary, and county Democratic and Republican leaders will soon caucus to send up their choices to the state level.

Figuring out how the race will play out isn't easy. The district is fairly conservative. The Cook Political Report rates the race a toss-up, and says Republicans generally have a slight advantage; Democrats point to data showing they may have an edge, but the bottom line is, it'll be close. Murtha was tight with labor unions, but he also opposed abortion and gun control in what remains a culturally conservative district.  And all the federal projects he brought home surely didn't hurt, either.

No matter who wins the race, matching Murtha's clout will be impossible.  "They start at the bottom of the totem pole -- no power," says Helen Whiteford, Democratic Party chairwoman in Cambria County, Pa. "That hurts." I asked her what kind of candidate she'd like to see Democrats nominate to try to hold the seat. "How about a clone?" she said.

One question looming is how local Tea Party groups will affect the race. The last time party officials, instead of a primary election, determined the GOP nominee in a special House election, it turned into a debacle for the Republicans. In New York's 23rd Congressional District, the approved Republican candidate was forced out of the race, a conservative Tea Party hero took over, and Democrat Bill Owens won a seat Republicans had controlled for more than a century. Republicans say they'll try to avoid that kind of mistake this time around, but it's too early to know what might happen.

Still, despite a gruesome national political environment, Democrats do have some hope. The party has won the last five special House races, in districts ranging from suburban Illinois to northern Mississippi. The Democratic Congressional Campaign Committee has $16.6 million in the bank, compared to $2.6 million for the NRCC.

"[Republicans] should be licking their chops, but yeah, I think we can hold on to the seat," says Greg Leathers, the Democratic Party chairman in Greene County, Pa. "If we come up with someone with the ideals of a southwestern Pennsylvania Democrat, I think people will adhere to that."