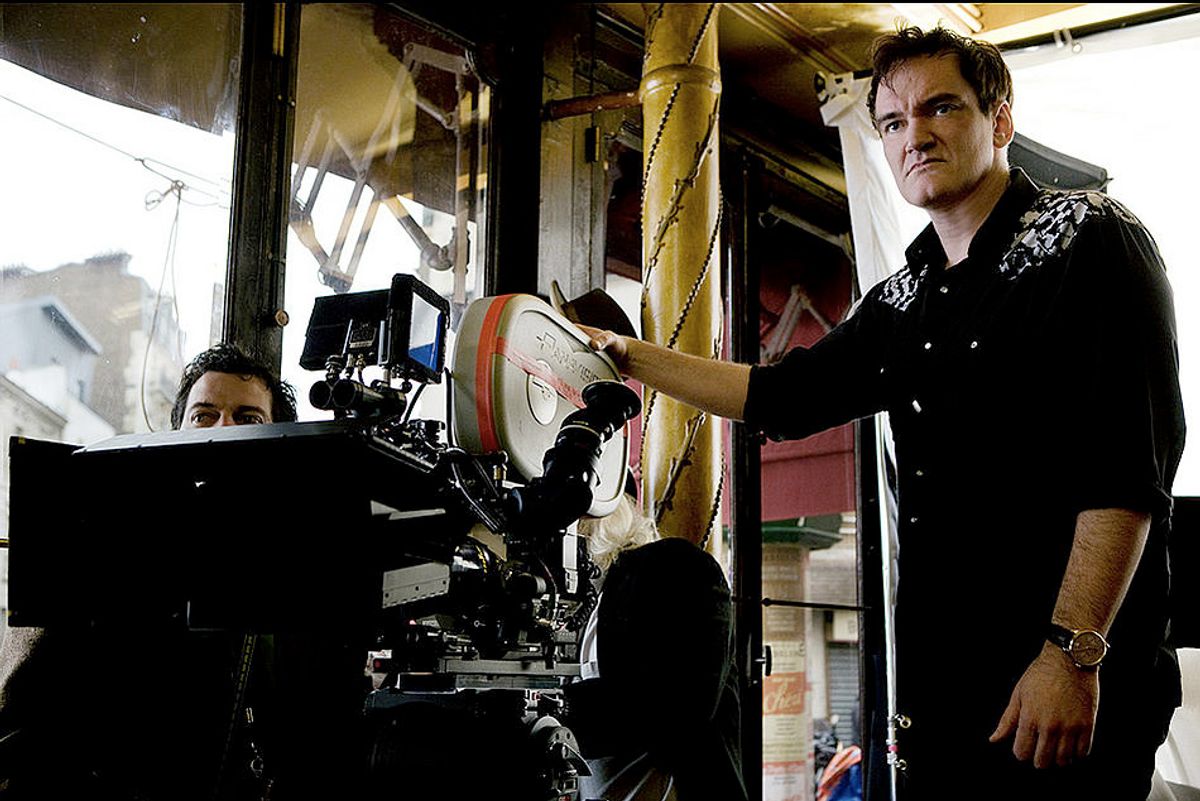 During a public appearance in London last month, Quentin Tarantino told the audience that with "Inglourious Basterds," he is now an auteur; he has established a body of work that can be analyzed as a whole and as a product of his unique vision. Recalling his experiences watching the films of Howard Hawks, he said: "My aim is that some kid in 50 years time has the same experience with me and my films." In this dueling blog, Moviefone's Jack Mathews and I debate whether Q.T.'s films actually form a body of work or remain a work in progress.

Jack Mathews: In an essay I wrote for the L.A. Times shortly after the opening of Q.T.'s "Pulp Fiction" in 1994 -- a movie I loved, by the way -- I cautioned critics and others to lower the volume on their hallelujahs. I wrote: "Whether the 31-year-old high-school dropout and video-store guru has the native intellect and social vision to go the distance as an auteur -- whether he has anything, after all, to say -- remains to be seen." Well, Q.T.'s now 45 with five full features behind him (I count the two "Kill Bill" volumes as one movie, as was originally intended, and "Death Proof" as a featurette, as it was intended) and while his films are definitely his, I'm still not sure he has anything important to say.

Anne Thompson: Tarantino has plenty to say. But his movies are not about your standard point-A-to-point-B narrative arc. He is discoursing and commenting on and jumping off from past cinema. With "Inglourious Basterds," masterfully, with care and affection, he dreams up a new universe that has more to do with World War II movies than the real thing. Great fun to watch, "Inglourious Basterds" is defiantly an art film, not a calculatedly mainstream entertainment. Tarantino throws you out of the movie with titles, chapter headings, and snatches of music (often Ennio Morricone). You don't jump into the world of the film in a participatory way; you watch it from a distance, appreciating the references and the masterful mise-en-scène, inspired by Sergio Leone spaghetti westerns, the French New Wave and "The Guns of Navarone," among other things. "Inglourious Basterds" improves on repeated viewings. That may partly account for its glowing reviews, a $320 million worldwide gross and eight Oscar nominations.

J.M.: I don't see where any of this refutes my growing contention that Tarantino does not seem to have anything to say. Given, he is a master at regurgitating his vast movie knowledge in ways that are original to their genres. He has a terrific gift at writing movie dialogue, he casts his films with eccentric precision and he gives an audience its money's worth. But as far as I know from watching his movies, he's not contributing to the human experience outside of movies.

A.T.: Making entertaining, innovative, original, not-like-anything-else films is a contribution to the human experience. You seem to be asking for some kind of old-fashioned message/theme/educational value to Tarantino's moviemaking. Is that required?

J.M.: It's only required if someone wants to leave a legacy of greatness, which Q.T. confirmed with his London comments. No question, he has proven his greatness to his hardcore fans, among whose numbers many critics and film scholars can be counted. But in the 16 years since "Pulp Fiction," he has not come close to matching that film's brilliance. His movies, while enjoyable to watch, are self-indulgent games for him. If "Inglourious Basterds" is a great war movie, "Blazing Saddles" is a great Western. They're both fun but that's all they are.

A.T.: Wow. Do movies have to educate us?

J.M.: No, but a great movie, like a great novel, has to do more than merely entertain. And for a filmmaker as interested in his legacy as Tarantino is, the body of work which he thinks is now ripe for analysis falls far short of greatness.

A.T.: While we disagree about what "great" cinema is, I do look forward to seeing Tarantino mature and grow. I want him to tackle more complex and sophisticated narrative structures. I see him as representing the movie-nurtured generation. He deserves praise for sticking to his guns and writing original material and now allowing himself to get sucked into the Hollywood morass. He has amassed an impressive -- if sometimes indulgent -- body of work across a range of genres. In that sense, he's very much like French New Wave critic-turned-filmmaker Jean-Luc Godard, who commented in his films on other movies as well as pop culture, or Howard Hawks, who is not remembered as well as he should be partly because he was such an adaptable master storyteller who kept changing styles.

J.M.: I would say the big difference between Tarantino and American auteurs like Hawks is that his movies are more about him than whatever story he's telling. He's young and, hopefully, will make a lot more movies and then -- maybe 15 years from now -- he'll have a body of work that really is ready for career analysis.

A.T.: While his oeuvre has already inspired reams of analysis -- more than most filmmakers of his generation -- when we look at Tarantino in 15 years, I predict that he will wear the respected auteur mantle, much the way Martin Scorsese does now, as a master of the cinematic medium who, more than anyone else, carries movie history in his head.