Hollywood Week begins. Will DeGeneres live up to the hype? 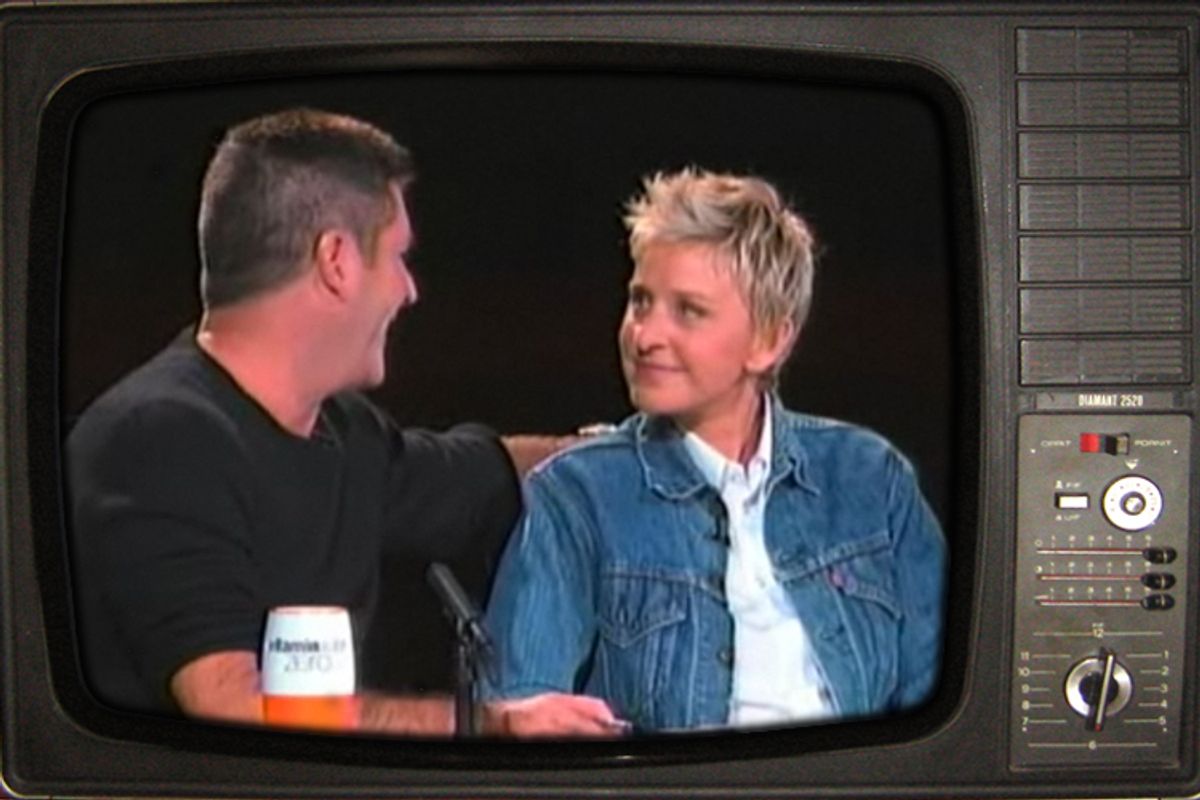 It seemed like we had to wait an eternity for Ellen to join Randy, Kara and Simon on "American Idol." But finally, she arrived.

She walked onto the stage at the impressive Kodak Theater in Hollywood, and I gasped. What was with Ellen’s hair? Her hair looked like a scene from "There's Something About Mary." Then she snuggled up to Simon, and there were some smoldering looks between the two of them. I had the strong suspicion that Simon had something to do with Ellen’s hair!

"So this is it," Ellen said, gazing deeply into Simon's eyes. "I come on, you leave."

This wasn't the only clever comment Ellen made during her debut. Here's a small but tasty sampling:

"You frighten me. It’s like you’re stalking me, like a leopard behind a cage. Seriously, don’t frighten your audience. Sexy and scary is a fine line."

"I’m tired as it is. That song almost put me right out."

"Please put some shoes on, it’s filthy in here. Hollywood is a disgusting town."

"You’re unique, have a unique quality. But you are hiding inside and scared to death. Watch those nerves… those nerves will scare you to death."

"Oh dear, there’s something wrong with his microphone." (Ellen was being kind because she was really referring to problems with a contestant's voice.)

I liked Ellen. I really really liked her. And in this case, my high expectations were not met with disappointment or resentment. Actually, my only complaint about Ellen was that we didn’t get to hear more from her. That wasn’t a function of any first-day-of-school jitters on Ellen’s part; it was a function of packing a whole lot of contestants into an hour-long show, not to mention the long and annoying commercials and time taken up by input from Kara.

Katie Stevens: Katie, a precious and pure 17-year-old, had a mature, smokey and sultry voice. Katie’s grandmother had Alzheimer’s, and Katie really wanted Grandma to see her do well since she may not remember Katie too much longer. Me? I wanted a sudden case of memory loss... I was so over these stories that were meant to moisten my eyes and pull at my heart strings. Watching Simon over the years had turned me into a cynic.

Andrew Garcia: Andrew sang Paula Abdul’s "Straight Up," and Kara was thinking, "Geez, Paula’s upstaging me and she’s not even here" but said, "That was genius. Paula would be screaming and yelling and clapping." Ellen was flapping her hands above her head, trying to do a Paula impersonation. Honestly, Ellen looked more like a pelican than a Paula. Fortunately, Garcia proved her talent and was sent on to the next round.

Haeley Vaughan was the miracle 2-pound baby now all grown up, wanting to be a country pop star. I found her performance to be a dud, but, miraculously, Haeley moved on to the next round.

Lilly Scott: Hey, I didn’t see Lilly at the Denver auditions, but there she was, from Littleton, Colorado and she was awesome! A beautiful and unique voice. Kara loved her.

Casey "Shirtless" James: Stripper boy kept his head and his shirt and was much more impressive in Hollywood than he had been in Denver. I swear I saw Victoria Beckham behind the stage ogling him...

Didi Benami: Ms. Benami sang a Kara song, and I rolled my eyes. But I was prematurely judgmental. Didi was damn good with a voice that produced instant goosebumps.

Ohio’s Crystal Bowersox was a single mom with a very goofy looking baby. Don’t act so shocked. I’ve even been known to call some babies flat-out ugly! Honestly, I think most babies are goofy looking. That baby looked like Jimmy Durante! Crystal spent money on tattoos for good luck. If she had asked me, I would have told her to spend her cash on Brite Smile. Yeah, I said it. And guaranteed, because Crystal is one future shining star, four weeks from now we’ll need sunglasses to look at her teeth.

There was the standard flow of terrible, whiny and delusional singers this week, and we were subjected to a montage of crying, sobbing, repeating the standard, "Simon is SO wrong, he just doesn't know what he is missing" lines and more wringing of hands and suicide threats.

Vanessa Wolfe: Vanessa was from Tennnneeseeeeeee and gosh darn it, Vanessa was a blue-collar waitress with a hankering for all things Southern, especially bridges to jump off of. Vanessa had never been on an AEROPLANE, and golly gee, she was on a real adventuuuuure and was gunna be a big, big Hollywooooood Steer. Vanessa was suffering from a case of bad grammar, pronunciation and nerves and got sent back real quick on another AEROPLANE to more unsuspecting bridges.

Justin Williams: Justin, a cancer survivor and voice coach, sang and performed on a key board. I really liked him, his voice and his deep blue eyes. But  "American Idol" got real mean, like pick-on-him mean and had him standing in a row all by himself. He was thrilled, thinking this meant he was moving on, but it was the end of the line and he was the only one in it. The eight people in back of him moved on. Cold.

Gratefully, the show ended with a real change. Happy and successful singers were jumping up and down for joy. "American Idol" was back in stride, salvaged from the ruins of weeks of horrible, painful auditions. Once again, Americans had hope and a change we could all believe in.

You gotta love American Idol... at least, for now.