John Bowe's "Us": How Americans talk about love 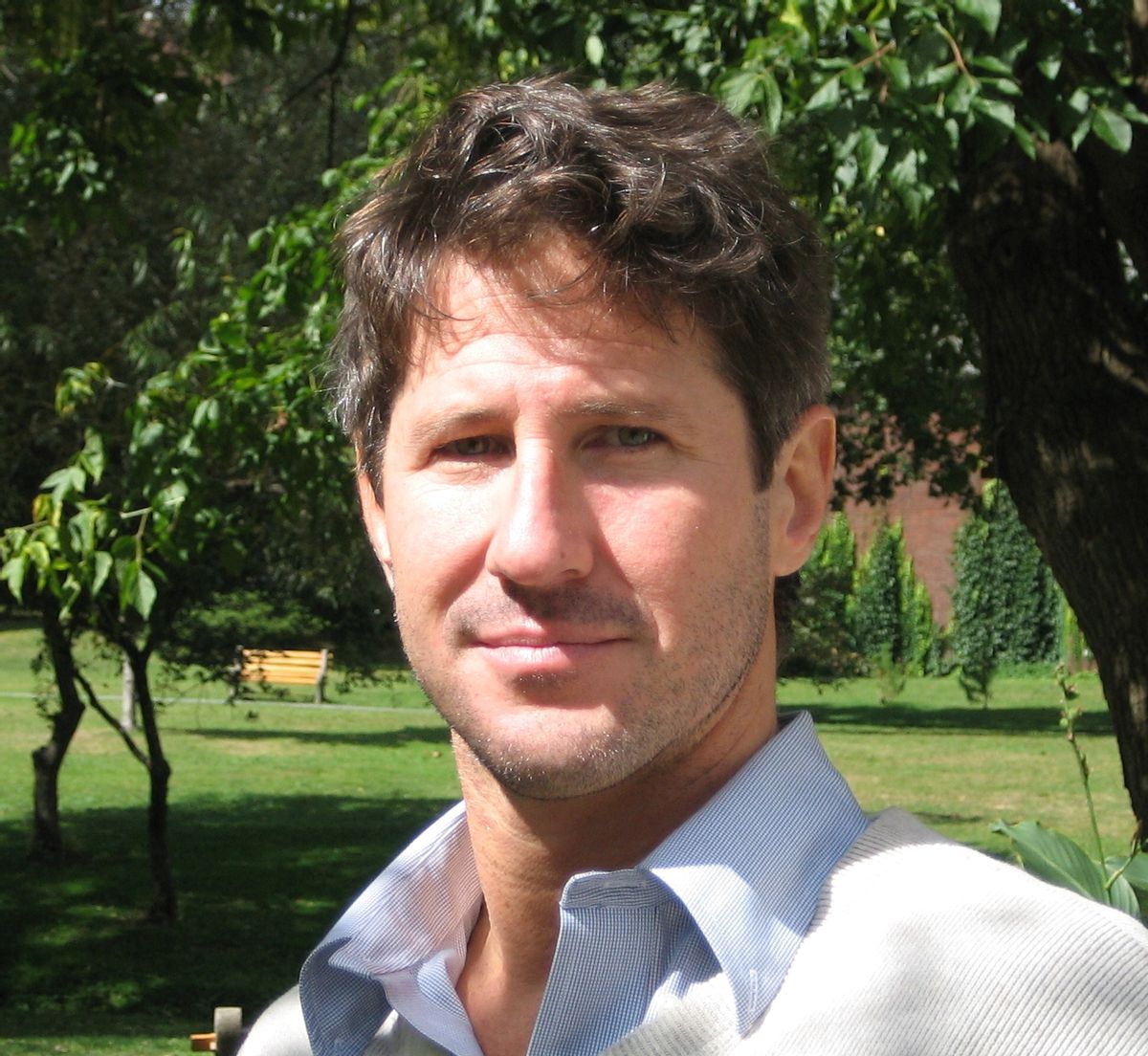 In January 2009, Salon began running a series of unusual oral histories about Americans in love. There was Paul Pesce, a Navy boy who met the love of his life on a New York train more than half a century ago. There was backwoods-born Shawn Whitworth, wrestling with fidelity and fatherhood while stripping at a gay bar. These weren't sentimental Hollywood fables but narratives that dared to show our search for love in all its dark, hilarious twists and contradictions.

The stories came courtesy of John Bowe, an accomplished journalist returning to the same format that had so perfectly suited 2001's "Gig," a much-celebrated series of interviews with American workers that he co-edited. After that project, Bowe spent a punishing five years reporting "Nobodies," a book on modern slavery that left him financially and emotionally drained. Thus the turn toward a lighter subject, love: To report the book, he and his team conducted interviews across the country (two to four hours each), and the result is "Us: Americans Talk About Love," which has recently come out in paperback. The book features dozens of romantic tales as only Bowe can offer, from a sweet couple who open their marriage to polyamory (excerpted in Salon today) to a 17-year-old San Antonio girl who, like, can't get over, like, this stupid boy.

John Bowe prefers to stay on the transcribing side of an interview, but he's a complicated character himself: A 45-year-old bachelor who co-wrote the screenplay for "Basquiat," he lives in a small studio in the West Village, the kind of charming, tidy space where books line the walls and copper measuring spoons hang above the stove. "The last great catch," the New York Times called him in a recent profile, which shot up the day's most e-mailed list (and earned him an evisceration from the snarksters at Gawker). We met at his studio recently to talk about the book, about marriage and the weird ways that Americans do talk about love.

This is a book about love, which is probably the most clichéd topic there is.

I didn't even think of it that way, but yes. You take your own pathways to these topics, and only in retrospect do you realize that you're a hack. [laughs]

No, I earned my stripes so much on the slavery book. That book was such a heartbreaker. Coming out of it after five years, I was understandably pretty depressed. I was also in love at the time. I don't know if that's what brought me to it or the fact that I needed to throw every gear into reverse and away from slavery.

You fell in love with a woman in Saipan while you were working on the slavery book. Tell me about that.

We were friends, and somehow -- pkow! -- we just fell in love. I remember saying to a friend that it completely solved the loneliness problem I've had my whole life and that most people have, this deep existential aaagh. But it brought with it an equal weight of problems. She had two kids, who I liked a lot. And she lived on this island, where I was spending quite a bit of time, but which was 9,000 miles away from where I need to be to earn a living. But she and I were both very unrealistic about being able to get her off the island. There was always this ticking time clock. I thought, I don't want to be the asshole who dates the woman with two kids and then leaves -- which is, in a way, exactly what happened.

Did you find it challenging to talk to people about love? It's kind of a vulnerable topic.

You just become like a doctor. Oh, those are your testicles? You develop a competent bedside manner: Does this feel uncomfortable for you? Have you been sitting too long? Do you need water? And by the way, in case you were confused, I, too, am a colossal fuck-up, and I'm not coming from a place of judgment or superiority.

There are so many bogus advice columns and books devoted to relationships. What are some of the things people say about love that make you bristle?

Honestly, what I have to say would not be that different than those bromides. Don't lie. Don't sleep with other people besides your mate unless your mate gives you permission. Listen to your mate. Accept your mate's faults and shortcomings. It's age-old stuff. What's different here is that it comes through a different channel, an experiential, non-expert-y format. If I'm listening to someone's experience, and I trust them as a narrator to honestly give me their story, even though it might not map exactly onto mine, I can borrow the parts that I can relate to.

By accident the book ends up being a great self-help book. It's like going to business school and studying a hundred business plans of successful and failed businesses.

So do Americans talk about love differently than other people?

They do. They don't talk about sex that much, unless you ask them. We interviewed an Argentine living here, who spoke so sensually. I remember he said, "Her skin was like milk and honey." No American would probably ever say that. The metaphors Americans came up with for love were great -- love was two people reaching for the french fries in the bottom of a McDonald's bag. And people continually refer to movies. It's like that one movie with Eddie Murphy. Of course, Christianity was huge.

But there are different kinds of love. There is love where people are spellbound, and then there is the kind of love you find in an arranged marriage. I think most of us have something closer to that second kind. We find someone we get along with, respect, and we make a partnership with them. We love them the way we love an old pair of pants -- through usage, you become lovely to each other. I don't think there's anything wrong with that. Most of the time, it's more durable, and more peaceful, and creates a better place for children. Of course, all of us want that first kind of love. But unfortunately, it doesn't always land on a plot of land that is ready to support it.

I want to ask you about some of the people in here. You mentioned to me that one of them always makes you cry.

Leonard Pelley. He's this guy who is sort of like half the people we know in Brooklyn -- 40-something, wannabe poet, you get the impression that he's not a terribly well-published poet. And he's just striking out and striking out with the ladies. He's got some Teflon thing -- he's clearly a sensitive, thoughtful guy, but there is something pathetic going on that he's not admitting. But then we get into his childhood, and the bombs start going off. There is a lot of pathos to his story. And he just knows he'll be alone for the rest of his life -- "I'll be that guy in the background of that group photo that everybody sort of wonders about."

One of my favorites was Betty Ann May, an 80-year-old woman whose story ends the book.

Her story just puts you in and tucks you into bed. That's why we put her last. If anyone resonates with having no regrets in life it's her. She divorced one husband and buried two, and now she drives her little trailer around, mostly staying in Wal-Mart parking lots, and you really believe her when she says she's happy alone, when she says, "Another piece of ass isn't worth the trouble."

As someone who hasn't been married, did this sour you on marriage at all?

Not at all. I mean, I view marriage as a pretty separate thing from love. Marriage is an institution, something you do for ownership of the house, for protection of the kids, and I think the mistake so many people make is the moment that the love isn't great they screw with the marriage and they screw with the kids and they malform these kids -- I would put myself in the group of beneficiaries of that approach, which is to say I'm the child of divorced parents. I think marriage should be strong enough to outlast a bit of cheating. I think people in other countries understand a lot of stuff that we don't, things we need to learn to work with a bit if we want something better than a 50 percent divorce rate.

One of the things I take away from this book is just how resilient a marriage can be.

Yeah. I remember this medical textbook writer we interviewed for "Gig." I said, isn't it depressing to be looking at eight different kinds of cleft palates and lesions and congenital shit all day? And she said, no, to the contrary -- I learned that for every problem you have there are numerous ways to fix it. I learned how versatile the human body is and how versatile modern medicine is.

Was there something the couples who got through it together had in common?

The couples that do the best seemed to be the ones that didn't rely solely on each other's personalities being great for their entire lifetimes but rather, had similar agendas, similar shared ideas for a framework of living -- whether it's being Christians and being really boring, or being polyamorous and falling in love with other people.

I also think marriage is a choice. That's what this [interview subject] Steven Hager says about marriage. You make a decision when you come home from work feeling pissy -- you make a decision not to be. When you're tired and your partner wants something, you make a choice to just shut up and go get it.

Do people tell you that's unromantic?

No. When you're looking at love as this mystical, vaporous thing, it's bound to get punctured. It's bound to deflate. When you look at it as a set of rules, or a big playbook, then you have it in your hands and you can do with it what you will. It's not up in the sky. It's not in God's hand. It's not in faith's hands. You're the fucking driver.