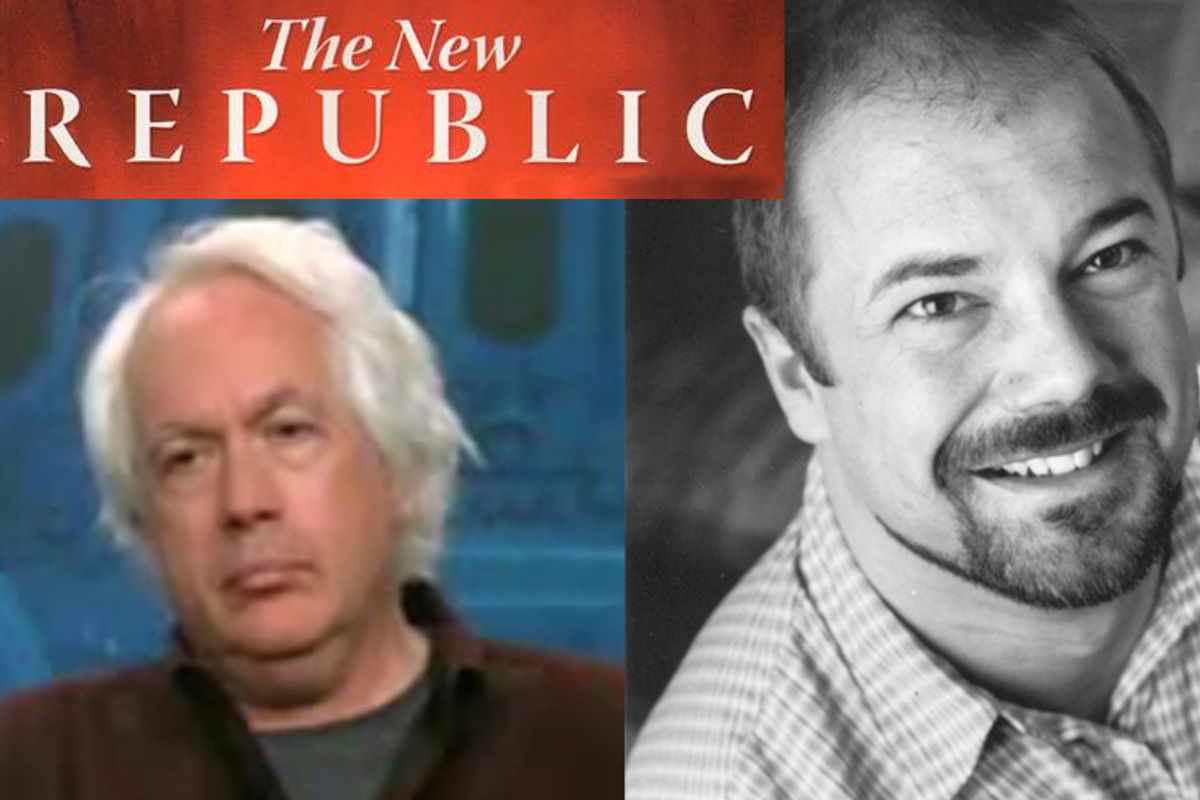 Even by that magazine's lowly standards, The New Republic yesterday published an amazingly ugly, reckless, and at-times-deranged screed from its Literary Editor, Leon Wieseltier, devoting 4,300 words to accusing Andrew Sullivan of being an anti-semite, largely due to his critical (i.e., forbidden) comments about Israeli actions and American neoconservatives.  Particularly since the horrific Israeli assault on Gaza, Sullivan has become more critical of Israeli actions and more dubious of uncritical U.S. support.  The whole TNR column oozes dark and obvious innuendo but never has the courage to state the anti-semitism accusation explicitly (the last paragraph comes closest).  TNR's Jonathan Chait piped up yesterday to embrace most of Wieseltier's premises ["Leon has written what I consider to be a trenchant and persuasive dissection of Andrew's (current) worldview on Israel and the Jewish lobby"], but then -- as though he's the Papal arbiter of anti-semitism generously granting absolution -- cleared Sullivan of the charge of anti-semitism, instead decreeing him guilty of the lesser crime of "carelessness" for failing to renounce the supposedly bigoted, Jew-hating "provenance" of Sullivan's ideas about Israel and Jews.

So shabby and incoherent are Wieseltier's accusations that they merit little real refutation, and I hope Andrew will resist the (understandable) temptation to elevate and dignify them by lavishing them with lengthy self-defenses.  Certain attacks are so self-evidently frivolous that they negate themselves, damaging the reputation of the author and his editors far more than the target of the attack [such was the case with Jeffrey Rosen's trashy, widely scorned and ultimately impotent anonymous hit piece on the intellect and character of Sonia Sotomayor, also published (naturally) by TNR].  Moreover, numerous commentators -- including Daniel Larison, Gawker's Alex Pareene, long-time-Sullivan-critic Brad DeLong, and especially Matt Yglesias -- have already torn Wieseltier's "rationale" to shreds, and Sullivan himself offered up two short but fatal pieces of evidence which, standing alone, expose the idiocy at the heart of Wieseltier's attack.  The specifics of Wieseltier's rant have already received more attention than they deserve.

All of that renders it unnecessary to dissect Wieseltier's specific claims.  Instead, I want to note several broad points about this episode:

(1) What's most striking about this attack is how inconsequential it is.  It was once the case, not all that long ago, that an accusation of "anti-semitism" was the nuclear weapon of political debates, rendering most politicians and pundits (especially non-Jewish ones) petrified of being so accused.  A 4,300-word prosecution brief published by The New Republic, accusing a major political writer of being a Jew-hater, would have been taken quite seriously, generated all sorts of drama, introspection and debate, and seriously tarnished the reputation of the accused.

No longer.  Neoconservatives have so abused and cynically exploited the "anti-semitism" charge for rank political gain -- to bully those who would dare criticize Israeli actions or question U.S. policy towards Israel  -- that it has lost its impact.  Ironically, nobody has done more to trivialize and cheapen anti-semitism accusations than those who anointed themselves its guardians and arbiters.  As Charles Freeman can attest, frivolous anti-semitism accusations can still damage those seeking high-level political positions, but those accusations no longer pack any real punch in virtually any other realm.  As neoconservatives became discredited, so, too, did their central political weapon:  casually and promiscuously accusing political adversaries of anti-semitism.

There's a clear benefit to this development (namely:  the threat of invalid anti-semitism accusations no longer deters free political debate beyond the halls of Congress), but there's an obvious danger as well:  cheapening the charge of anti-semitism through frivolous and politically manipulative uses weakens the ability to combat actual, real anti-semitism, which does still exist.  If perfectly mainstream writers, expressing perfectly appropriate and reasonable arguments about Israel, are routinely condemned for "anti-semitism," then it must not be a particularly bad thing to be, so this reasoning goes.  If The Atlantic's Andrew Sullivan, and Time's Joe Klein, and Foreign Policy's Stephen Walt, and the University of Chicago's John Mearsheimer, and Gen. Wes Clark (a TNR target), and Howard Dean, and former President Jimmy Carter, and a whole slew of others like them are "anti-semites," then how terrible of an insult is it?  By tossing around the term cynically and to advance personal vendettas, neoconservatives are the authors not only of their own irrelevance but also, more significantly, of the growing irrelevance of the "anti-semitism" charge.

(2)  The double standard at play here is so glaring as to be virtually blinding.  The New Republic has long been edited and controlled by one of the most bigoted hate-mongers in American political life.  Marty Peretz's long record of hateful comments about Arabs and Muslims rivals David Duke's, circa 1989, when speaking of African-Americans and Jews.  As former TNR writer Spencer Ackerman revealed:  Peretz "likes to flirt with descriptions of Arabs as subhuman" and "everyone who works at TNR knows Marty is a racist."

The very idea that Wieseltier and Chait -- of all people -- would hold themselves out as arbiters of bigotry while working for Peretz for years without ever objecting to a hateful word he wrote on that topic (indeed, Chait vehemently defended his boss from charges of anti-Muslim animus) is so warped as to border on the comical.  It would be as if Dick Cheney's loyal aides published a treatise objecting to oppressive detention and torture policies in other countries.  Of all the political magazines in the nation, TNR is close to the bottom of the list when it comes to credibility in assessing and protesting bigotry.  But because overt and unapologetic hatreds are acceptable when directed to Arabs and Muslims -- while people's words are surgically dissected to detect any hidden, subtle, lurking anti-semitism -- the absurdity of this charade largely goes unmentioned.   We just collectively agree to ignore the fact that this respectable political magazine is edited by one of the nation's most nefarious haters among those with a platform beyond a street corner cardboard box.

(3) An even more glaring double standard is evidenced by Wieseltier's complaints about Sullivan's supposed "assumption. . . . that every thought that a Jew thinks is a Jewish thought," a belief he says "is an anti-Semitic assumption, and a rather classical one."  Wieseltier specifically complains that, when criticizing Charles Krauthammer and Michael Goldfarb's extremism, Sullivan notes that they belong to a small minority of American Jewish neocons who support such policies largely due to fealty to Israel.  Treating individual Jews as members of a group defined by their Jewishness is, Wieseltier argues, an "anti-semitic assumption."

Yet this is precisely the assumption that drives the political worldview and arguments of many of Wieseltier's political comrades.  As I've documented many times, neoconservatives constantly argue that American Jews should vote for Republicans rather than Democrats in American political elections because, as Jews, they should cast their votes based on what is best for Israel, and GOP policies, they claim, are better for Israel.  Joe Lieberman spent a substantial portion of 2008 running around to Jewish enclaves in key swing states telling Jewish voters to vote for McCain because he'd be better for Israel.  Large organizations exist to ostensibly represent the shared political interests of American Jews as Jews. Of course some American Jews form their political beliefs about the Middle East based on their relationship as Jews to Israel -- just as some Cuban-Americans do with regard to Cuba, Mexican-Americans do with regard to Mexico, Irish-Americans do with regard to Ireland, etc.

You can't run around making direct appeals to the Jewishness and Israel-affection of American-Jewish voters when you want to induce them to vote Republican, but then turn around and scream "anti-semite!" at your political opponents when they discuss the same issues in the same context or talk about the political beliefs of various Jewish factions.  At least you can't do that without being guilty of hideous double standards and, worse, cheapening and trivializing "anti-semitism" to the point of irrelevance (see point 1).

(4) Writing about the TNR attack on Sullivan, Yglesias writes:  "when I raised this issue on a liberal listserve some people said they had no sympathy for Sullivan because of one or another of the things he’d done to piss them off over the years."  When I read this, I assumed, without having any real idea, that Yglesias was referring here to Journolist, but no matter:  the attitude he describes (and commendably rejects) is pervasive and truly toxic.

What Yglesias' fellow listserv members are saying, in essence, is that they determine their political commentary not based on the merits of an issue, but rather based on whom they like and who their friends are.  Even if I find Wieseltier's anti-semitism accusation to be pernicious and ugly, I won't say so because Andrew Sullivan isn't my friend and I don't like him.  The converse of this juvenile mentality is:  even if I find that critique to be true and compelling, I'm going to object to it and attack the critic because it's aimed at my friend.  The accompanying worldview is:  I'm not going to criticize that politician, even when he's wrong, because he's a Good Democrat and is on my team.  I find it amazing that this small-minded, clique-based "thinking" persists beyond the sixth grade, but it obviously does, and it particularly thrives among Beltway denizens.

What one thinks of Andrew Sullivan, or how angry he's made one over the years, ought to be about the most irrelevant factor imaginable in determining one's reaction to this TNR attack.  Sometimes, even people you don't like are the targets of odious and harmful accusations, and sometimes, even your Bestest Friends, fellow party members and listserv pals might do wrong things that merit criticism.  Wieseltier's polemic is a classic example of anti-semitism accusations tossed around with no conceivable basis and for purely ignoble ends.  It's the very tactic that has caused significant damage in the past.  So obviously unhinged is this particular assault that it actually presents a good opportunity to discredit behavior like this once and for all.  That's all that should matter; how many grudges one nurses towards Andrew Sullivan is nice fodder for gossipy listserv chats, but no responsible or even adult commentator would allow it to influence one's views on this matter.

UPDATE:  TNR, of course, has a long and disgraceful history of smearing Israel critics as anti-semites.  As but one example, see this equally vile attack from 2005 on University of Michigan Professor and blogger Juan Cole, comparing his writings to the Protocols of the Elders of Zion and accusing him of secretly craving Israel's non-existence.  Someone needs to gather TNR writers and editors together and read them The Boy Who Cried Wolf.

UPDATE II:  Sullivan's comprehensive and at times quite personal response to Wieseltier is here.  And, as I've noted before, and whatever else might be true about him, Joe Klein's writings on Israel, neoconservatives and anti-semitism over the past several years have been generally excellent, and his post on the Sullivan/Wieseltier matter is no exception.