Girly and geeky, together at last 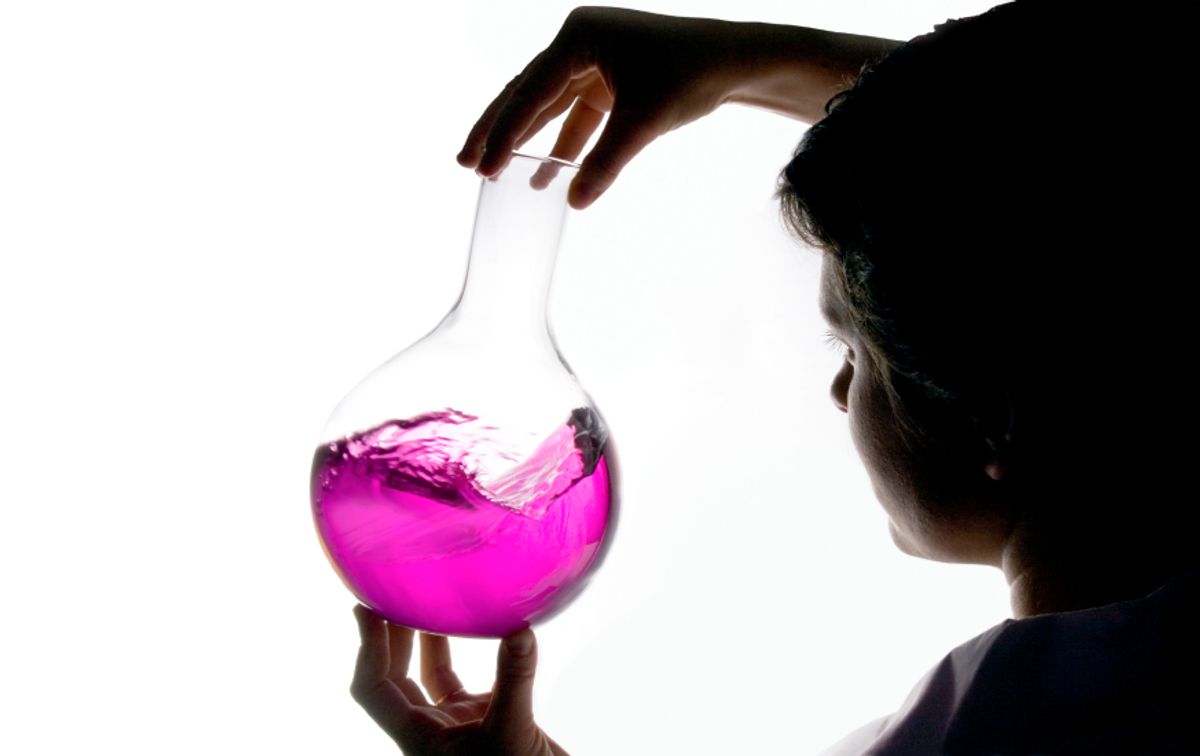 We at Broadsheet have done plenty of complaining about gender role conditioning over the years, and just a couple of months ago, I was ranting about how marketers and retailers gear science and engineering toys heavily toward boys. (The blog Sociological Images caught a great example of what girls get in that category: Pink microscopes and telescopes that are less powerful than the masculine versions.) Given that a little support and encouragement can have a profound effect on girls' confidence and achievement in science and math, the message that building blocks or pretend space travel aren't for them is worrisome. And later on, the trappings of professional geekdom remain stereotypically masculine, which one recent study found might be alienating to women.

But today, the Internet offers at least two heartwarming examples of geekiness and girliness thriving alongside each other. First, Boing Boing has the story of computer scientist Christine Alvarado's mathematical awakening -- which involved a My Little Pony.

I had several small plastic Ponies that I used to play make-believe with my friends. But I had one larger, plush My Little Pony, a bright-green stuffed horse with a vivid pink mane and tail that I played with all by myself. I would sit for hours on my own, braiding and rebraiding its tail. I developed a system for braiding the tail of my Pony that taught me about mathematical concepts-- from division to recursion.

After attempting a braid involving 243 separate pieces, Alvarado moved on to observing recursion in her cauliflower -- earning funny looks from her parents at the dinner table -- and a lifelong math and science lover was born.

In grown-up girly geekery, there's science writer Linda Geddes' account in New Scientist of turning her wedding into a biology experiment. She wore a white princess dress and a tiara and fussed about the color scheme, but she also invited a leading oxytocin researcher, Paul Zak, to help her determine whether the "cuddle chemical" -- a hormone known for "promoting bonding, trust and generosity" -- spiked for the bride, groom, and their nearest and dearest during the ceremony. "I had written several articles about this hormone before, so my wedding last July seemed the perfect chance to see if it would surge in the ultimate public display of affection," writes Geddes.

The plan was to measure blood levels of oxytocin in the bride, groom, three close members of our families and eight friends both before and after the ceremony. OK, it was a small sample size, but Zak saw this as a pilot study that might point the way for future research, and perhaps even shed some light on why people stage public weddings in the first place.

As the big day draws closer, the scope of the project broadens: "Once Nic, my husband-to-be, had resigned himself to turning the most romantic day of our lives into a science experiment, I realised there were several additional hormones we could check at the same time (see 'Hormones gathered here today')." The participants would also be tested for changes in stress hormones, testosterone, and vasopressin, a cousin of oxytocin involved in "mate-guarding and jealousy" in animals. From there, it was mostly a matter of practical and logistical challenges familiar to all brides -- sort of. "[F]inding a refrigerated centrifuge and a ready supply of dry ice in rural south-west England was proving tricky. Then there were the worries about getting blood on my silk wedding dress, and what to do if someone fainted."

I won't spoil the results for you; the whole article is pretty fascinating and well worth a read. I'll just say that this story cheered me this morning more than a thousand discussions of whether it's possible to have a feminist wedding ever have, and Alvarado's My Little Pony story was the hot pink cherry on top.

That's not because they make me any less concerned about rigid gender conditioning, mind you. All these anecdotes really tell us is that for some people, the force of scientific curiosity is strong enough to thrive in contexts where girls and women are expected to be more focused on fashion or nurturing or romance. But they're also a nice reminder that scientific curiosity can, in fact, be applied to fashion and nurturing and romance, as well as countless other "girly" interests. We'd probably see more girls grow up to be scientists and engineers and computer geeks if they had equal access to "boy" toys, yes, but we might see even more if girls were encouraged to see opportunities for scientific and mathematical exploration all around them, even in the pinkest, frilliest room imaginable.

Some girls think My Little Ponies are dead boring and some women think big, white weddings are, and they certainly shouldn't be pressured into faking interest for the sake of the status quo. But neither should kids and adults of any gender who love traditionally feminine things and traditionally masculine intellectual pursuits be expected to see those loves as contradictory. As a commenter on Boing Boing said, "I think what I love most about this is that generally, girls who embrace girly things are seen as silly and illogical- certainly not bright, logical and scientific. It just goes to show that science, rather than being genderless (read: default male) truly embraces all genders."