Senate jobs bill: A band-aid for a gaping chest wound

The worst labor market since the Depression deserves more than a package of tax credits. But hey, it's bipartisan! 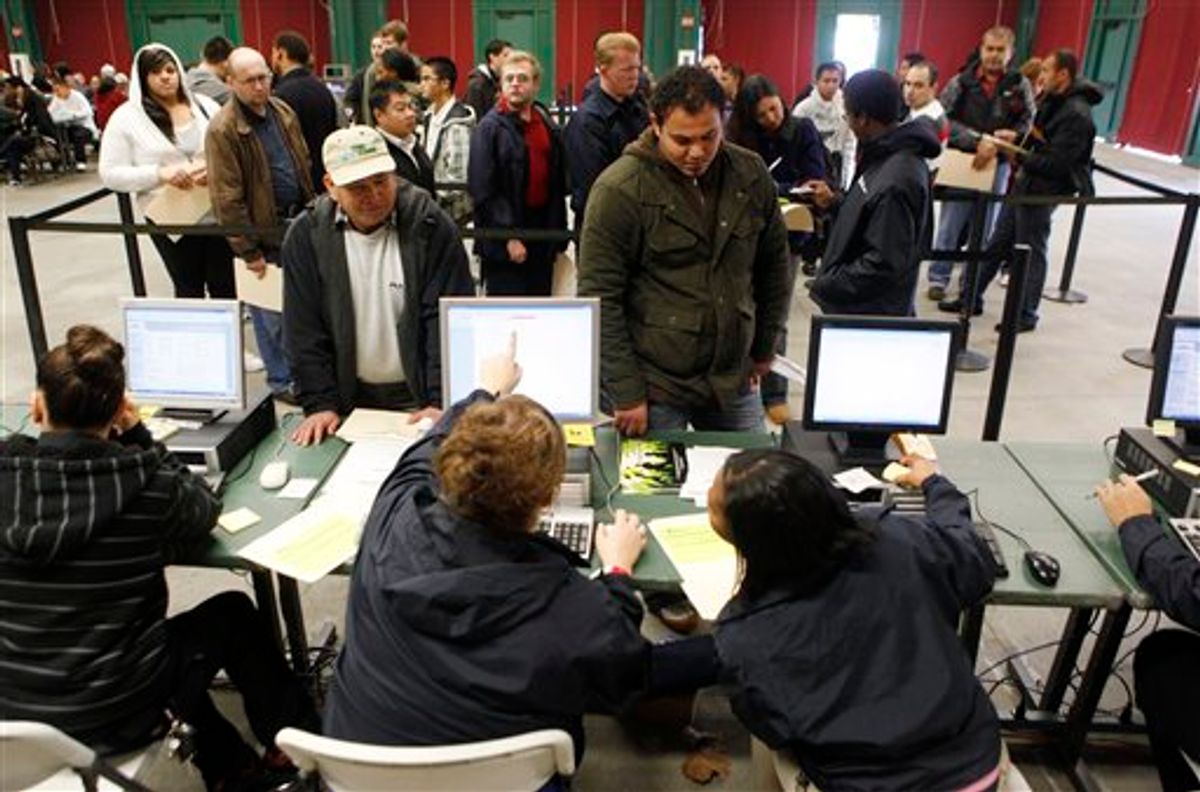 Here's a chastening mental exercise. First, read Don Peck's extraordinarily depressing article in the March issue of The Atlantic, "How a New Jobless Era Will Transform America." Then, take a few minutes to skim the 361-page draft of the Hiring Incentives to Restore Employment "bipartisan" Senate jobs bill cooked up by Democrat Max Baucus and Republican Chuck Grassley.

The two documents exist in separate universes. Peck's exhaustively reported exploration of what the loss of 8 million jobs in last two years will do to the fabric of American life rends the soul:

A slowly sinking generation; a remorseless assault on the identity of many men; the dissolution of families and the collapse of neighborhoods; a thinning veneer of national amity -- the social legacies of the Great Recession are still being written, but their breadth and depth are immense.

To which, the Senate applies a band-aid.

The Baucus-Grassley bill, pegged at a cost of $85 billion, is certainly better than doing nothing. It provides payroll tax relief to businesses which hire workers who have been unemployed for more than 60 days, extends unemployment and Cobra health care benefits and authorizes funding for highway and transit construction. But the bulk of its provisions involve tinkering with the tax code, by, for example extending credits that are already on the books but about to expire, or carving out other forms of relief that are absurdly specific -- a mine rescue team training credit! a seven-year recovery period for motorsports entertainment complexes! It may not be an example of rearranging deck chairs on the Titanic, but it is at best a gentle massage that will relieve only the most superficial signs of pressure emanating from a society reeling with hurt. A New Deal, it ain't.

By Peck's account, the worst labor market since the 1930s will leave a lasting scar on generations of Americans. Young people entering the labor market for the first time will see their earning power depressed for their entire lives. Marriages will break down, communities will relapse into vicious cycles of crime and violence, and race and class tensions will surge. Even under hopeful scenarios, it will be years before the economy grows enough to repair the damage.

The Baucus-Grassley bill won't change any of that. But hey, it's "bipartisan" -- so maybe it will get 60 votes. Thank heaven for small favors.

UPDATE: Well, that didn't last long. Politico is reporting that Senate Majority Leader Harry Reid has "scrapped" the Baucus-Grassley bill, apparently after complaints from his own caucus that Baucus had made too many concessions to the GOP.

Reid told reporters that the Baucus-Grassley bill wouldn't do enough to show voters that the Senate was serious about addressing the unemployment problem.

"The message is so watered down with people wanting other things in this big package that we're going to have to come back and finish that," he said.

Reid promised to bring a new bill to the floor next week, but, as described by Politico, its main components -- "'Build America' bonds, a small business tax program that allows quick expense write-offs, a one-year extension of the highway act, and a bipartisan tax-credit" -- still don't sound like strong enough medicine for what ails the nation.