Why Bill Clinton won't slow down 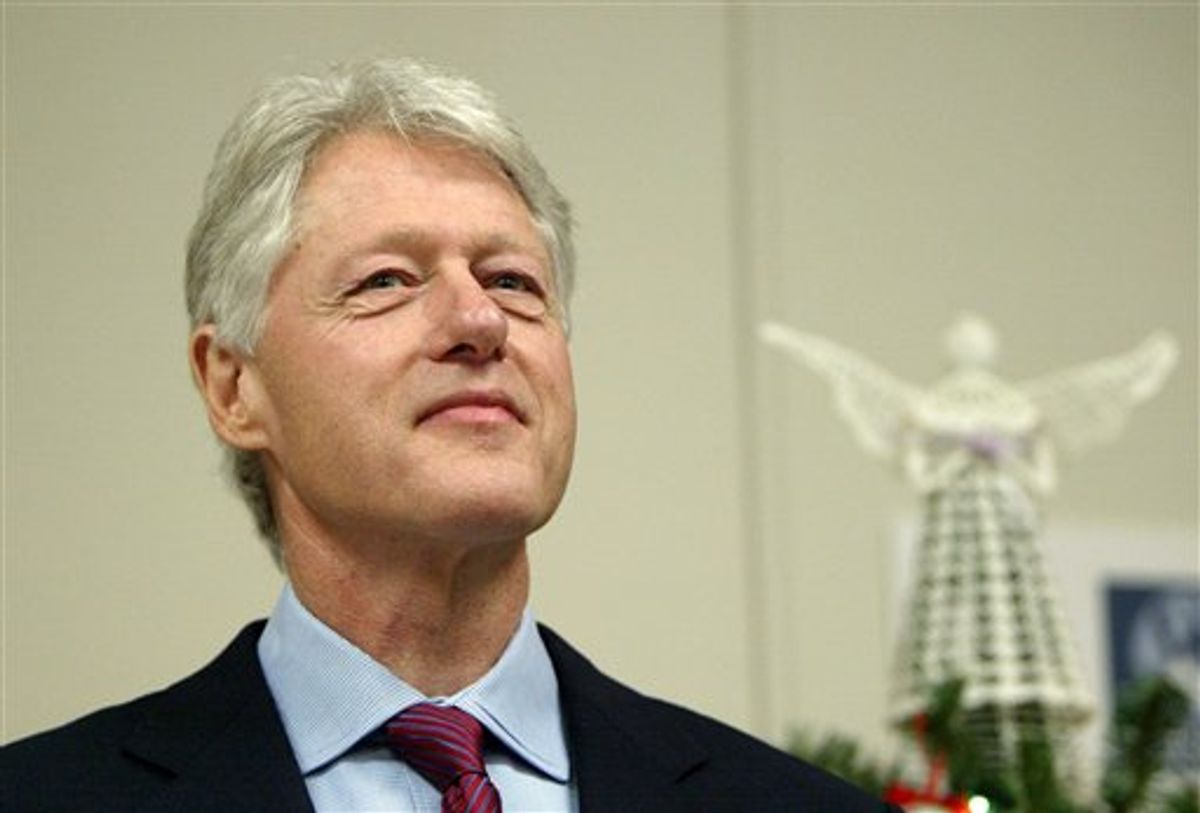 FILE - In this Dec. 23, 2004 file photo Former President Bill Clinton waits his turn at the podium before formally thanking the staff at Westchester Medical Center, in Valhalla, N.Y. for diagnosing the heart condition that led to his quadruple bypass surgery in August. Clinton was hospitalized with chest pain at a New York hospital, Thursday, Feb. 11, 2010. (AP Photo/Kathy Willens, File) (AP)
--

Often since his first heart surgery in 2004, Bill Clinton has alluded to an increased awareness of his own life’s limitations; it is a sense that must have enveloped him again on Thursday, when chest pains sent him into the operating room at Columbia Presbyterian Hospital in Manhattan for a new pair of stents in his chest. But the paradox of Clinton is that these experiences -- no matter how unpleasant and ominous -- ultimately spur him on rather than slow him down.

Clinton entered the hospital around noon, underwent surgery to open his arteries, and within hours his counselor and closest aide Douglas Band had released a statement indicating that the former president would soon return to work at the Clinton Foundation and as U.N. Special Envoy to Haiti. Based on his past record, there is little reason to doubt that promise. His cardiologist Alan Schwartz told the press on Thursday evening that his patient had already gotten up and walked around in the hospital, and that he could be expected to resume his "very active lifestyle." According to the cardiologist, that lifestyle did not cause the chest discomfort that sent him back to the hospital.

While working on a book about his post-presidency during the past year, I’ve traveled with him frequently and observed the impact of his driven life. He usually looks well and never lets fatigue depress his performance at a speech or rally, yet there are moments when he admits to feeling exhausted.

Although he is now 63, Clinton maintains a schedule of meetings, research and travel that would be demanding for someone two decades younger. To someone who has observed him closely over the past several years, the intensity of his work appears to have grown rather than diminished.

The pattern was set fairly soon after the coronary incident in the fall of 2004, when he narrowly avoided a heart attack before undergoing quadruple bypass surgery. Well before his doctors approved, he ended the post-operative rest to campaign for Democratic presidential candidate John Kerry.

Not many months later, even after a second surgical procedure in March 2005 to remove scar tissue and excess fluid from his chest, Clinton was circling the world almost nonstop, spending days at a time in the air, roaming from country to country across Europe, Africa and Asia, stopping briefly in each place to meet with heads of state, visit an AIDS clinic or both. The shifting time zones and packed agendas left little time for sleep.

He operated in much that same hectic style -- until he was suddenly slammed into overdrive by the Haitian earthquake. When I flew down from Newark Airport to Port-au-Prince with him on Jan. 18, he had been working for five days without rest, alternating between planning meetings, nights of telephone calls with world leaders, and fundraising media dates that often began at dawn. In recent weeks, Clinton has discussed working on Haiti’s reconstruction for at least the next two years, and possibly much longer.

Following today’s operation, he is reported to be resting comfortably, in fine spirits -- "He’s all good," said a close friend. He will now rest for a few days, as everyone wearing a new pair of stents must. What this latest intimation of mortality is likely to tell Clinton is not that he needs to slow down, however, but that he still has too much to do and too little time. "I told him he can be back in the office on Monday," said Dr. Schwartz.

So maybe he will take the weekend off.