"Valentine's Day": The pain of L.A.'s gorgeous and lovelorn 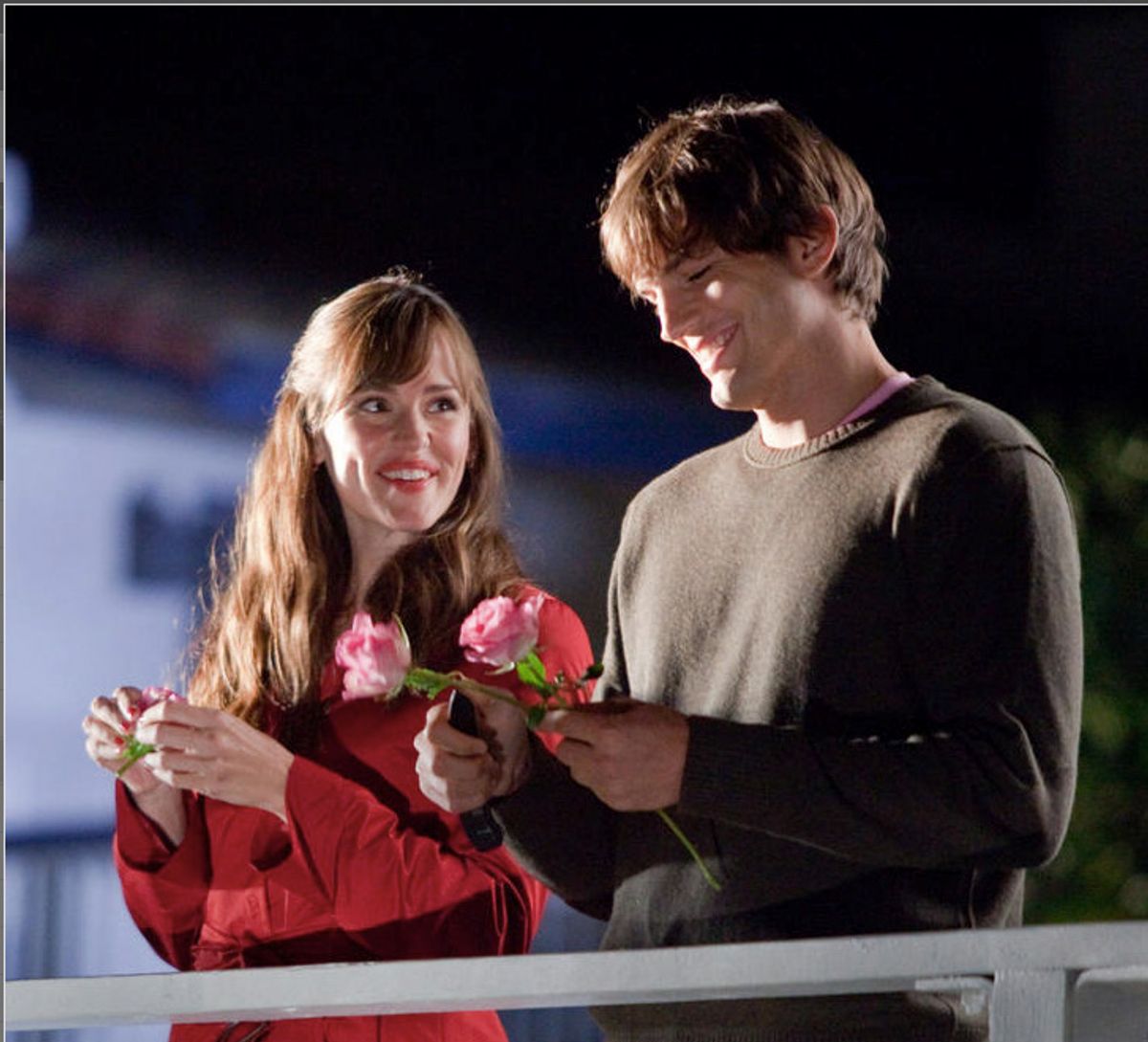 You know, there's really no motion-picture genre that is less suited to a long-winded, episodic, career-wrapping, would-be epic than the romantic comedy. I mean, OK, "A Midsummer Night's Dream" has rom-com elements, and so does its most famous cinematic knockoff, Ingmar Bergman's "Smiles of a Summer Night." Unfortunately for Garry Marshall, the director-impresario of "The Princess Diaries" and "Pretty Woman" and many other film and TV comedies across a 40-odd-year career, he seems to have those one-day-in-the-life-of-love examples dimly in view in "Valentine's Day," a sprawling, listless, ensemble-cast tribute to his own comic genius.

At the risk of being both pompous and blindingly obvious, Marshall is not exactly Bergman, or Shakespeare either. Neither of those guys, as far as I know, ever tried to drag laughs out of a resolutely unfunny production with gags about cute puppies spurning a newly jilted lover or 2-year-olds kissing each other or Ashton Kutcher driving a purple, early-'60s Chevy low-rider badly through Los Angeles traffic. (That last is absolutely slanderous: I'm saying here and now that Ashton can roll low, slow and smooth when the situation demands.)

But the problem with "Valentine's Day" is not just that it's mawkishly sentimental and highly predictable -- it's supposed to be those things -- or that Katherine Fugate's screenplay is too ambitious by half, and certainly too complicated for Marshall to grasp in his leathery but lovable mitts. (Once in a while Fugate will get off a good line, and it gets swallowed: "Valentine's Day is like a cosmic bitch-slap from the universe," says Jessica Biel, in a rapid monologue apparently delivered to her wall.) I'm saying that a Garry Marshall movie has to be funny in order to be anything at all, and this one is so deeply involved with its pseudo-meaningful roundelay of beautiful but inexplicably lovelorn people as to be teeth-grindingly, mind-warpingly boring.

Most of the gestures made at gags in "Valentine's Day" fall amazingly flat, and feel as if they were retrieved from the reject drawer on one of Marshall's vintage TV sitcoms, several decades back: High school students want lattes in their vending machines! Jews converse with nuns! Blondes are not that bright! Mexicans actually speak and understand Spanish! The movie is 125 minutes long -- which is already wretched excess for a showman of Marshall's experience -- but it feels like hours or years or geological epochs. Generations of mice lived and died under the theater seats, spawning aspartame-poisoned new generations while I was watching this. Taylor Swift began the film as a teenage country-music superstar, and ended it by replacing Shirley MacLaine in the wizened-grandma role. Seriously.

No, that's not true. That's a lie I made up out of bitterness. What is true, though, is that Swift, a movie neophyte assigned the nothing role of a crazy-in-love high school airhead, is one of the few actors not wasted in "Valentine's Day." Her overgrown-pixie look and odd, widely set eyes lend her a little bit of Marilyn and a little bit of Lucille Ball: She's Taylor-made for comic greatness! (I can't believe I wrote that either. But if I am the first among Internets to supply that particular whore-quote, it will have been worth it.)

There are a handful of other bright spots, none of them sunnier than Anne Hathaway's performance as Liz, a struggling receptionist cum phone-sex entrepreneur whose free-spirit ways may be too much for her brand-new Indiana-bred boyfriend (Topher Grace). Is it just me, or does Hathaway possess a remarkable ability to make a pat, stupid and underwritten character -- and Liz is 3-for-3 -- into the goofy, unjaded, moderately sexy little sister of Holly Golightly? And then there's Jessica Biel as Kara, who is both the second-rate publicist of a disgraced football star (Eric Dane) and also a romance-averse chocoholic who hosts an annual "I Hate Valentine's Day" dinner. Is Biel actually any good in the role? I'm not sure, but she's got long legs, a brilliant smile and a form-fitting designer wardrobe, and those things helped me sit through "Valentine's Day" rather than flee to some happier place, such as an Iranian prison.

Taken as a whole, though, "Valentine's Day" involves watching talented and attractive people squander their energies on a pointless and random exercise, which ... hey! Wait a second! That's an excellent description of what the real Valentine's Day does to the rest of us (less talented and attractive though we may be). Maybe Marshall and Fugate are playing a deeper, trickier, more influenced-by-Godard game than I think. Except that if they were they might make better use of Ashton Kutcher, a renegade talent whose likable persona has overwhelmed his acting chops, at least thus far. (Catch David Mackenzie's little-seen gigolo saga "Spread" for Kutcher's best movie performance.)

In "Valentine's Day" Kutcher plays a milquetoast florist named Reed, who pops the question to his scarily tan girlfriend (Jessica Alba) at daybreak on Valentine's Day, thereby launching our City of Angels relationship round-robin. Alba's spray-bronzed character says yes and pretty much disappears thereafter, leaving Reed to don a pink long-sleeve T-shirt and pink baseball cap and utter lines like, "Now I can be a sugary cheeseball mooning about love to total strangers all day long without people thinking I'm a moron. Because it's Valentine's Day!" Uh, yeah. About that moron thing? Let's give that more thought.

It's no wonder Alba packs her bags and gets her supernaturally hued hide out of Dodge, leaving Reed alone on the commercially mandated Feast Day of Romantic Love -- alone, that is, except for his suspiciously hot but totally platonic "best friend" Julia (Jennifer Garner), whose boyfriend, slithery cardiac surgeon Patrick Dempsey, is supposedly out of town on this night of nights. I'm not saying that Kutcher's character reads as gay, exactly, and I'm not saying that a female writer can't do convincing guys. I am saying that both Reed and Julia seem like incompetent first drafts for human characters rather than the real thing, and that Marshall's not a good enough director to pull more out of these actors than what's on the page.

Of course we can see where Reed and Julia are heading, but all I can say is that it takes a special gift to build a rom-com around Ashton Kutcher and Jennifer Garner and have it be almost no fun at all. Their prospective relationship is a sketch, a vague rumor; most of the movie is filled up (at least as I recall it a full 24 hours later) with super-awkward man-hugs involving George Lopez, piano-bar renditions of "I Will Survive" led by Jamie Foxx, and romantic wisdom imparted by Hector Elizondo to a 10-year-old kid.

Who else is deployed herein, to minimal effect? Hell, who isn't? Julia Roberts actually has a fetching cameo as an Army captain, returning from overseas duty on a long plane flight, who develops a transitory something with her buff seatmate (Bradley Cooper). There's the tiniest germ of another, better movie in their unshared secrets, but I'm grateful not to see any more of the movie in which Shirley MacLaine and Elizondo play a later-life couple facing Important Realizations about their marriage. I bet you didn't know this, but old people can feel the pangs of love too! Also, they like gardening, and chinoiserie, and Willie Nelson's quieter, more noodly material.

By the end of "Valentine's Day," well, you know what to expect: Couples have broken up and reassembled and reconfirmed their commitment and whatnot and we're all supposed to feel a little philosophical and wistful and maybe soggy inside. Queen Latifah has performed her designated role as the sexually ambiguous big black lady who gets no action, which is so retro I think that part of the movie came out before she was born. Marshall reportedly hopes to reassemble his cast for a New Year's Eve-themed sequel set in New York, in which Kutcher's florist will switch to dealing ganja in hipster Brooklyn nightclubs and Hathaway's phone-sex gamine will become a hard-boiled Long Island City stripper with four kids by different dads. OK, given that it won't be like that: I am powerless to stop that sequel from happening, but you, ladies and gentlemen, are not.