Is it a safety issue when airline employees must travel for hours just to get to their job? Plus: All hail the 747 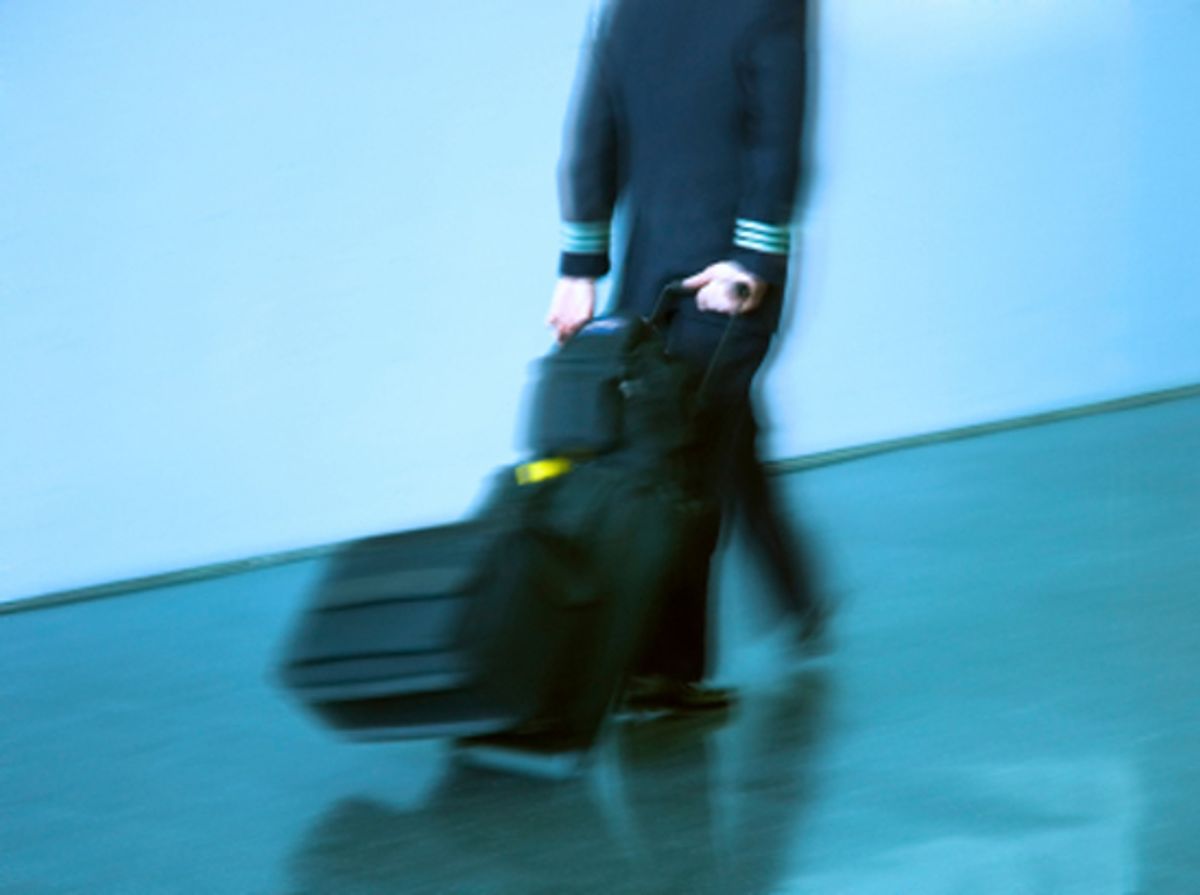 You were asking what really bugs me?

What really bugs me is when you're on a plane coming in to land, and you touch down, and even before the nose wheel hits the pavement, with the reversers roaring and bins shaking and everything lurching forward, the flight attendant is already on the microphone giving you the welcome speech: "Ladies and gentlemen, welcome to Los Angeles. The local time is 10:45 a.m. Please remember to collect all of your personal belongings and blah blah blah blah."

I don't know why this irks me as much as it does. There's something undignified about it. And with all the racket from the engines, nobody aft of the wings can even hear. Can't they wait until the plane is on a taxiway? It's not as if it doesn't take another 20 minutes to reach the gate.

A similar thing goes on in the cockpit, courtesy of impatient air traffic controllers who apparently don't understand that pilots in the throes of landing a plane are busy. You're still at a hundred knots or more, with the reversers up, making your callouts, and here's ATC rattling off instructions: "Flight 78, roll to the end, turn right on taxiway T to taxiway GG and hold short of runway 16R, monitor tower on 123.7..."

Hah? What? Who? And if you don't answer back within three seconds, they get upset. Everything else about flying seems to move in ultra-slow motion, from the boarding process to the security lines. Why the rush with the announcements and instructions?

But on a more important note...

Last Tuesday the National Transportation Safety Board revealed its findings on the crash of Colgan Air (Continental Connection) Flight 3407, the Dash-8 turboprop that went down near Buffalo on Feb. 12, 2009. For the most part, the board's conclusions merely reiterate what we already knew:

Essentially, during final approach, crew inattentiveness allowed the aircraft to slow to a point where a stall-warning system activated. The proper reaction to the warning would have been to add power and keep the plane's nose either neutral or slightly low. Capt. Marvin Renslow got the first part right, but he inexplicably pulled back on the control column, raising the nose and throwing the plane into an aerodynamic stall. It then crashed to the ground, killing everybody on board.

For in-depth analysis of the accident, including technical discussions of stalls and warning systems, see my prior columns here and here.

The idea of pulling back on a control column to offset an impending stall violates even the daftest pilot's most rudimentary intuition, never mind his training. It's not a whole lot different from standing on the accelerator when you mean to stand on the brake. Why Renslow did this is anybody's guess. Some have speculated that he may have believed the aircraft was suffering a horizontal stabilizer stall rather than a stalling of the wings, in which case his actions made more sense. But he had no real reason to think this, as the stall-warning system (a combination of an alarm and a so-called stick pusher) is tied to the wings, not to the stabilizer. Perhaps, or even probably, it was nothing more than panic. As an NTSB psychologist put it, Renslow's response was "consistent with startle and confusion."

That startle and confusion would have been exacerbated by the fact that, as Renslow saw it, the plane should not have been stalling. Prior to takeoff, in anticipation of possible icing conditions, Renslow had armed a system that would trigger the stall warning at a higher-than-normal speed. However, he and his first officer, Rebecca Shaw, mistakenly left their airspeed reference indices at the normal values. Thus the warning system was reacting to ice that wasn't present, and based on what their airspeed instruments were telling them, a stall warning made no sense. This confusion does not justify the deadly mistake of pulling back instead of pushing forward, but it certainly was fuel to the fire. As were a host of contributing factors, such as Renslow's (very) spotty training record, chatter in the cockpit, Shaw's sinus trouble and possible crew fatigue.

In many ways the crash represented a perfect storm of everything that is wrong and dysfunctional about regional airlines, from the absurdly low pay (Shaw earned a salary of about $17,000) to the long hours and hostile working conditions. I'll remind you, as I have in the past, that regional flying is by no means unsafe; the fact that accidents remain so few and far between is a testament to the thousands of highly skilled and well-trained regional pilots out there performing admirably in tough conditions. But to keep things safe -- indeed, to make them safer -- we need to be proactive. Carriers and regulators need to work together with an eye toward better hiring and training standards, better working conditions, and improved flight and duty time rules.

On that last issue, the NTSB was unable to reach a consensus on whether pilot fatigue had played a role, recommending only that airlines address the practice of "commuting" -- that is, pilots flying to work assignments from distant cities, sometimes several time zones away. Both Renslow and Shaw had commuted to Newark prior to their final workday -- Shaw coming all the way from Seattle — and spent the night dozing in the airline's airport crew room.

I was a little stunned by this. Granted, commuting is a factor if we're going to talk about fatigue at regional airlines. But what about the pilots' work schedules themselves? It worries me that commuting, rather than the Federal Aviation Administration's inadequate duty time and rest rules, is going to get the bulk of public attention.

More than 50 percent of crew members commute, pilots and flight attendants alike. Commuting can be complicated and, I admit, occasionally stressful. Airline employees almost always ride standby, and company rules require us to allow for backup flights in case of delays or cancellations. This can mean having to leave home several hours before sign-in, in some cases a full day prior. But on the whole pilots are pretty good at getting adequate rest prior to work. Once that work actually starts, however, a schedule can be highly demanding. Regional pilots routinely work 12-, 13-, even 14-hour days, flying multiple legs in and out of busy airports, sandwiched between minimum-rest layovers. Actual flight time is held to a maximum of eight hours, but the time spent on duty — waiting out delays, transferring between flights, etc. — is not as strictly regulated. (Neither is it always compensated for; per-hour salaries are similarly based on airtime, not ground time.)

And although the opportunity to commute is a privilege that allows crews to live where they please, it can also be a necessity. Aircraft and base assignments change frequently, and having to uproot and move each time a new bid comes out — especially if you're making $30,000 or less and trying to support a family — would be enormously disruptive and expensive. Moreover, can you really expect a junior pilot or flight attendant to live in Boston, New York City or any other expensive metropolitan area on a regional airline salary?

Word on the street is that regulators might attempt to rein in commuters, restricting the number of hours a crew member can spend in transit prior to signing in for duty. This, I think, is a bad idea, and I would recommend focusing first on revising the FAA's inadequate rest and duty provisions. Regulating commutes would be extremely difficult, and at some point you're attempting to regulate what somebody can or can't do in what is essentially his or her spare time. Are you suggesting a pilot shouldn't commute the morning of a trip? Well, why is catching a flight necessarily more fatiguing than anything else he might be doing that morning? Etc.

For those of us assigned to international routes, commuting is comparatively easy, and the work assignments generally less stressful. Duty periods tend to be longer — many of them overnight flights to Europe or beyond — but we have fewer of them. I typically commute three, sometimes four times each month, while a regional pilot might have to do it five, six, seven times or more. And with augmented crews we get scheduled rest breaks en route, together with long layovers in nice hotels. Many long-distance commuters will bunch their assignments together into one or two continuous stretches totaling anywhere from 10 to 15 days. This means having to spend a night or two in a hotel or crash pad between trips, but requires only one or two flights to and from home each month.

My commute is about as easy as it gets. I've got gobs of departures to choose from, and it's a short flight with no time zone changes. I've met plenty of colleagues who commute coast to coast, and one or two who do it from Europe. I know of a flight attendant who makes the trip to his base in New York from Santiago, Chile, and have been told about a now-retired Eastern Airlines captain who commuted to Atlanta all the way from New Zealand.

Not all the news recently is bad or controversial. You probably missed it, but Monday, Feb. 8, was something of a historic day in commercial aviation. That afternoon, Boeing's 747-8, the newest variant of the company's iconic jumbo jet, completed its long-awaited inaugural flight.

The 747 is arguably the most important aircraft in aviation history. When it debuted in 1969, it was more than double the size of any existing aircraft, with economies of scale that made long-distance air travel affordable for millions. And it did so with an aesthetic dignity seldom seen anymore in commercial transport. Forty years on, this newest version is bigger, sleeker and packed with technological advances, yet it remains true to the 747's original profile. No, it's not the biggest commercial jet anymore, but it remains the most elegant.

And lastly, apropos of last week's introduction to "Captain Steve," the Ask the Pilot knockoff ... To those of you who sent letters: Thanks for the moral support. Meanwhile the whole thing got me thinking. I'm somewhat surprised there aren't more of these gigs out there. That is, more experts from this or that unusual profession writing, answering questions, and otherwise sharing insights. Much the way there's a "Dummies" book for just about every pursuit, it strikes me there must be a market out there for some good insider info. If nothing else, there's a pleasure that comes from reading about certain lines of work — especially those we're glad not to be doing ourselves.

A little of this is already out there, obviously. Not all purveyors specialize in Q&A forums the way I do, but various trades have their commentators and storytellers of record. The most famous of them is probably Anthony Bourdain. Though if you ask me, his popularity is less about any compelling backstage glimpse than simply exploiting our obscene infatuation with food.

More talented is Atul Gawande, the surgeon, author and commentator, whose insights into the world of medicine often appear in the New Yorker. I usually find them riveting and can't put them down, even if I'm reading through a haze of extreme jealousy. Not only is Gawande wealthier, more famous and a better writer, but he's younger than me.

Where can we take this? "Ask the Exterminator." "Ask the Systems Analyst." "Ask the Bouncer."

Er, well, maybe the idea is more limited than I thought. Of course the important thing isn't so much the profession itself, but rather how it's presented. I have no predisposed interest in cuisine, for example, yet I thoroughly enjoy Bourdain's essays (and, to a lesser degree, his TV show). I use this same standard for measuring my own success. My most savored letters are those from devout readers who openly admit that they couldn't care less about flying. That's about as flattering as it gets.