It's got almonds, garlic and Pernod, but the key is learning how to build and layer flavors. Use these three steps 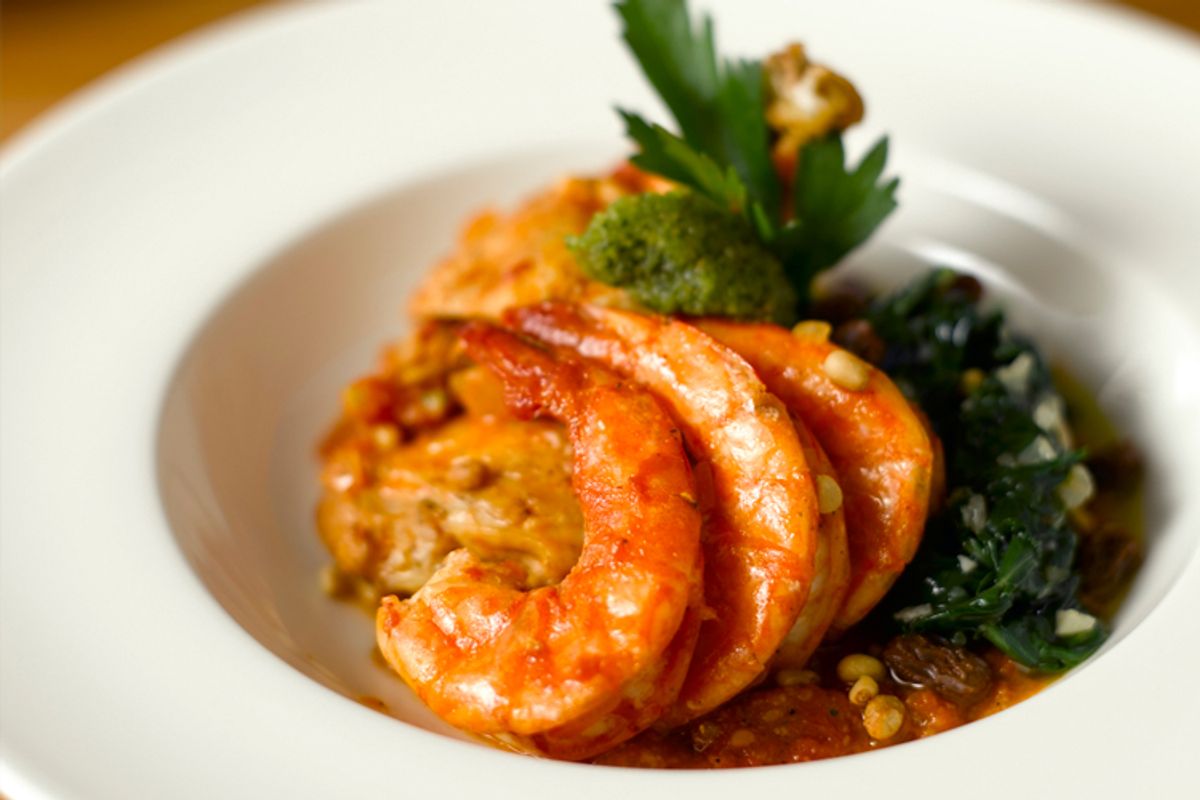 Chuck read the recipe over my shoulder. "Oh, I remember Mar i Muntanya," he said. "Some kid made it next to me in class," he said. "It tasted like dirty dishwater."

I frowned. We were most of the way through culinary school, and I really didn't want to waste one of my last days making lame food.

"Oh, don't worry," he said. "It's a great recipe; it's all there. That kid just couldn't cook for shit — he can't get flavor out of anything."

Professional cooks have a particular way with the word "flavor." They often use it not in terms of type, but in terms of quantity; it's not "What flavor is it?" but "How do I get more flavor in it?" And usually what they're talking about isn't even what ingredients go into a dish, but what they're getting out of them — it's about techniques that our instructors and chefs pound into us to bring out and build the flavors of our ingredients.

The Culinary Institute of America's recipe below for Mar i Muntanya, Catalan for "Sea and Mountain," has a lot going for it: braised chicken and shrimp, thick with ground almonds, floral with Pernod, it hits you with waves of garlic and an undercurrent of chocolate. Even when not made perfectly, it's a memorable dish. (Don't mind Chuck; he's a superhuman cook with standards to match.)

But what's really notable about it are the methods with which the dish teaches you to build flavor in all your food: You cook things slowly, patiently, to extract and concentrate flavors, and then you structure and layer them on top of one another. Think of the process in phases.

It starts with a sofregit, a Catalan base of slow-cooked onions and tomatoes, although the technique is common to lots of cuisines. Cooking vegetables slowly breaks down their cells, releasing juices that are then concentrated by reduction. It allows sugars to caramelize evenly, rather than blackening and burning in spots. And it marries flavors together, rounding them out and making them hard to pin down individually. All these processes give the dish an underlying sweetness and complexity, a foundation. Often you won't detect these flavors right up front, but they're the ones that flesh out the background.

The middle phase is the braise, where a sear on the chicken gives you rich, browned flavor, and the bird and shrimp simmer and release their juices to the wine and stock.

And the finish gives you accents and high notes. Often the last thing you add to the pan is the first thing you taste — the relative rawness of your finishing touch keeps its flavors fresh and brash, while fats or oils in the finish give the whole sauce a glossy veil. In this recipe, you finish the sauce with a picada, another Catalan base of ground nuts, which gives it a toasty, garlicky, beguiling sexiness.

When you combine a strong finish with a rich, slow start, you end up with a progression of flavors that spark the palate at first bite and change while you eat, each chew revealing different characteristics that you've layered into each phase. This is what cooks talk about when they talk about getting more flavor.