A Taliban firefight, up close 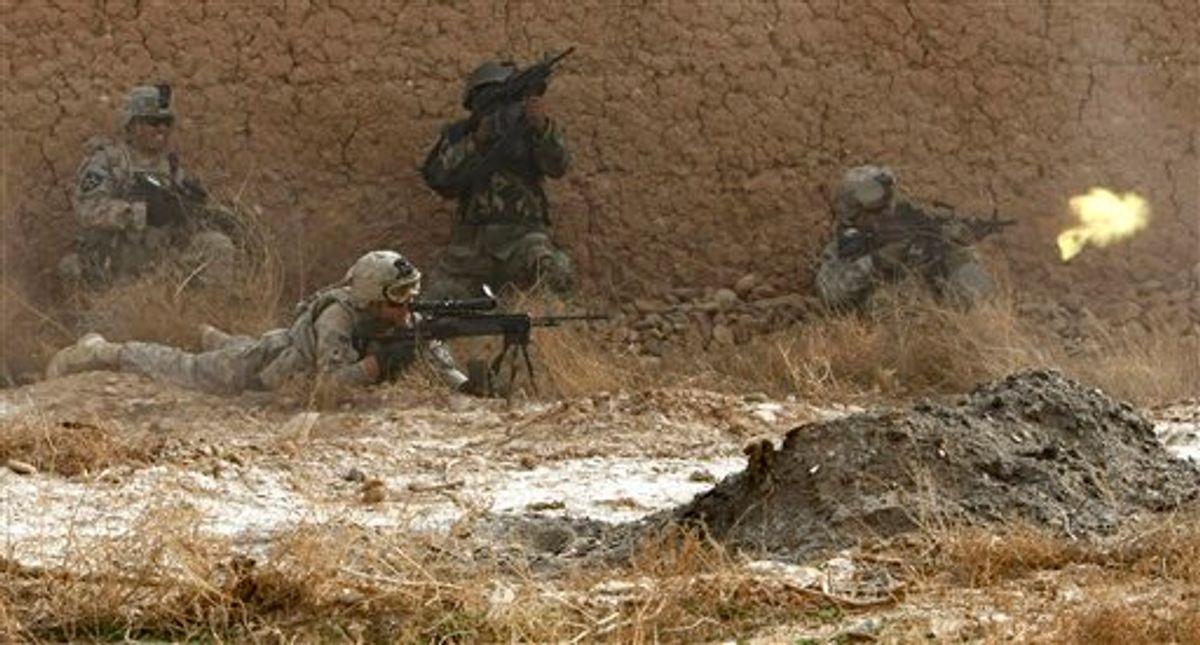 U.S. soldiers and one Afghan soldier exchange fire with insurgents during a patrol in the Badula Qulp area, West of Lashkar Gah in Helmand province, southern Afghanistan, Sunday, Feb. 14, 2010. In the fight, one soldier was wounded and at least one insurgent was killed. The soldiers are operating in support of a U.S. Marine offensive against the Taliban in Marjah area. (AP Photo/Pier Paolo Cito) (AP)
--

"Who's hit?" someone yelled. The American soldiers were pinned down in a ditch Sunday, bodies prone in the mud.

"I don't know!" another voice shouted in the din of gunfire.

A U.S. soldier was down, shot in the chest by an insurgent near the besieged Taliban stronghold of Marjah. A Canadian soldier in the same patrol took a bullet in the front of his helmet, right where the center of his forehead was, like a bull's-eye. He was stunned, but unhurt.

Where were the insurgents shooting from? Which of the mud-walled compounds up ahead?

The firefight in the Badula Qulp region of Helmand province lasted about 45 minutes and tapered off after a Cobra helicopter shot a Hellfire missile into the building where the Taliban were believed hiding. Soldiers said they found the body of one suspected insurgent and heard another may have been buried quickly

It was a small skirmish in the grand scheme of the Afghan war. The focus of the fighting was to the southwest in Marjah, where U.S. Marines launched an offensive a day earlier.

But the intense gunfight showed the difficulty of fighting an enemy who knows the terrain, watches, waits and strikes when it chooses -- frequently appearing to capitalize on Western rules designed to prevent civilian casualties.

The patrol began in the early afternoon, heading off a canal road and into farmland to the west. Fifty men: an American platoon, up to 30 Afghan soldiers and 10 Canadian troops who advise the Afghans. They moved slowly, in two columns. Two Afghan soldiers with metal detectors, searching for mines, led the way.

An Associated Press reporter and photographer accompanied the patrol.

The sky was clear, the air brisk, and it was very quiet. About 700 yards off the road, the soldiers saw four or five unarmed men, watching. The men moved away. Within minutes, gunfire erupted. Caught in the open, the patrol hit the earth and returned fire.

But it was an exposed position and hard to locate the source of fire. One group of soldiers picked up and sprinted, slowly, it seemed, with their cumbersome gear, for a shallow irrigation canal. It was cover, but not for long.

"I saw five guys, moving right to left," said Spc. Nathan Perry of Cedartown, Ga., hunkered in the ditch. He said he had felt bullets "around my feet, popping off."

A Canadian berated an Afghan soldier whose gunfire was too close to soldiers scattered elsewhere in the field.

"Hey sir, where's it coming from?" an American shouted to his platoon leader, 1st Lt. Gavin McMahon of Brooklyn, N.Y.

"Somewhere over there," McMahon said. He gestured west.

The men in the ditch pushed forward, trying to reach a low earthen berm for better cover. The Taliban had a line of site straight down the canal. Rounds snapped a couple of feet away. To the AP reporter, a civilian with no military background, it seemed counterintuitive: running forward, toward the danger. Not back.

Then the American soldier got hit. The bullet hit the shoulder piece of his protective vest, and bounced down into his chest.

Spc. Benjamin McQuiston of Tucson, Ariz., was just ahead of the man, who cannot be identified until his family is notified in keeping with U.S. military regulations.

"When the shots went off, I heard him yelling. I thought he was scared. I was yelling too," McQuiston said later. "Then I heard him coughing. It sounded weird. I looked back and he was coughing up blood."

With shooting all around, soldiers cut away the injured man's shirt, and put a chest seal on the wound to prevent air entering.

"I'm going to be good," the man said. He was able to walk and had the energy to shout an obscenity at the Taliban.

McMahon was on the radio, calling for help. The mission had immediately shifted from fighting the Taliban to getting a wounded man to safety and treatment. The patrol pulled back, different groups laying down fire while others ran to cover, bunching up against mud walls.

But it wasn't over.

The AP reporter, hauling the wounded man's ammunition belt, was with two or three men who sprinted around a corner, straight into another ambush. The bullets flew past just a few feet away, maybe. It was hard to tell. It was also hard to tell what was cover and what wasn't. The only thing to do was to lie, crouch, curl up and hope.

There were glimpses of another world. A calf wandered in the midst of it all, moving its head this way and that, as though uncertain about which way to go. Up close, a big ant crawled over chunks of earth, oblivious to the adrenaline-fueled men trying to kill each other.

Spc. Andrew Szala of Newport, R.I., tried to keep the injured man talking, conscious. He chatted about the plot of a season of the American comedy series, "The Office," a send-up of white-collar life.

"Michael starts his own paper company. Pam goes with him. Jim stays behind," Szala said as the battle raged.

In the new ambush, a man was firing from above a green door. Spc. Richard French of Indianapolis was in the hatch of a Stryker, an American military vehicle, that pulled up on the canal road. He saw the man and opened fire with his M4 rifle.

"My first three rounds were tracers. I watched them go right into him. I watched him fall," French said later. "First time I ever killed anybody. That was interesting."

Close to the road and relative safety, soldiers saw a man in black walking. He was unarmed. They watched him in their scopes but did not shoot. Western forces in Afghanistan are operating under rules of engagement, or ROE, that restrict them from acting against people unless they commit a hostile act or show hostile intent. American troops say the Taliban can fire on them, then set aside their weapon and walk freely out of a compound, possibly toward a weapons cache in another location.

"The inability to stop people who don't have weapons is the main hindrance right now," McMahon said after the firefight. "They know how to use our ROE against us."

The patrol arrived back at its camp late in the afternoon. Sgt. 1st Class Norm Neumeyer of Pittsburgh walked over and told them their day wasn't over. They had to find the shooters. After a brief pause, they put their gear on and headed back down the road.