"How to make it in America": Hanging with the have-nots 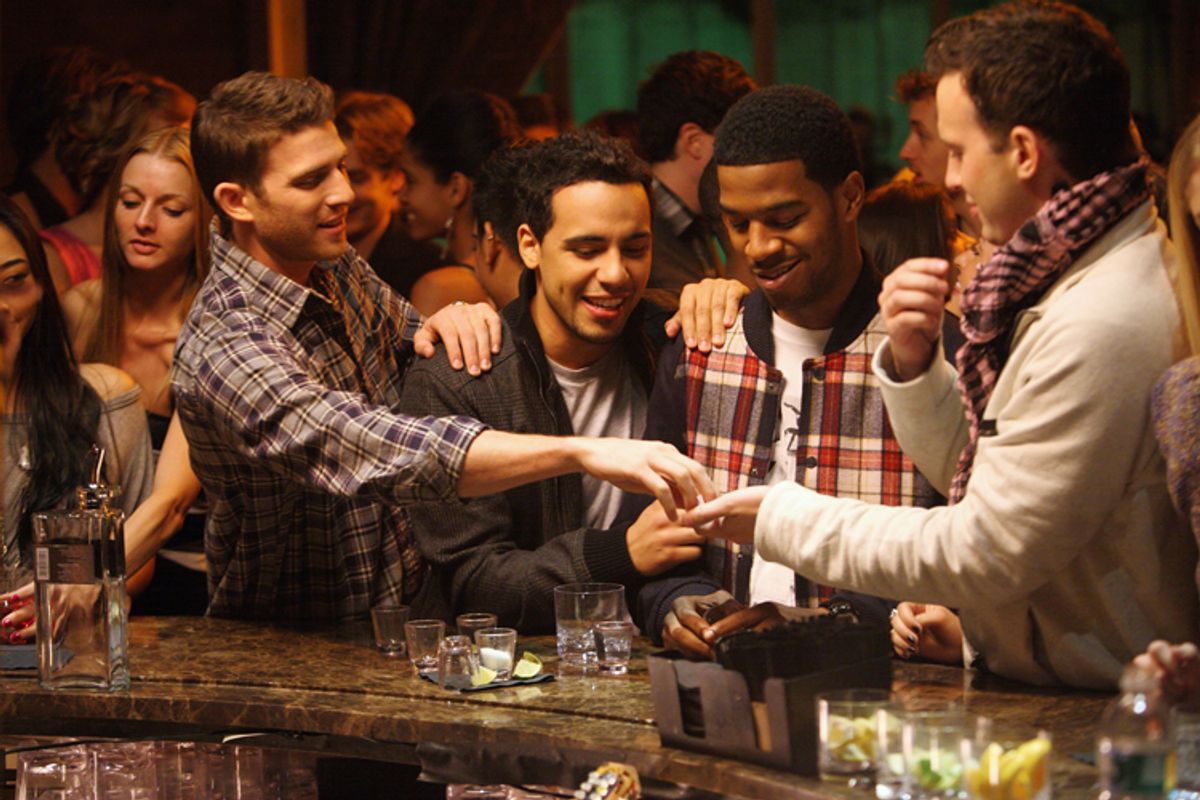 Bryan Greenberg, Victor Rasuk, Scott "Kid Cudi" Mescudi and Eddie Kaye Thomas in "How to Make It in America."
--

Who tricked us into thinking that creativity was the holy grail of personal achievement?

Everyone wants to be creative and successful these days. "I want to create something lasting," they say, as if writing another out-of-print book or throwing up another album on iTunes might beat back mortality's inexorable creep.

Of course, most of us aren't preoccupied with our legacy so much as disturbed by the pointlessness of most other options. Let's see, I can create something meaningful and expressive, or I can help some company that creates a disposable product trick the world into buying it.

What no one tells you, of course, is that the former inevitably turns into the latter. No sooner have you put the finishing touches on your masterpiece than a phalanx of professionally smooth humans gathers to discuss how to peddle your brand to the appropriate demographic. "Who is your demographic, do you think?" they'll ask you.

I don't know, you'll answer. Crazy people? Angry people? People who just want to create something lasting but end up pissing away their prime in extended Twitter exchanges and tedious teleconferencing calls?

Just don't say so out loud. Too many sullen artists and brilliant recluses have made that mistake before you, and they have a laundry room filled with glorious unsold paintings or brilliant unsold manuscripts to show for it. Face it, you're going to have to sell something, eventually. Even surgeons and priests and teachers and executives at charitable foundations (especially them) have to sell something. Don’t stay in denial about the need to sell forever, because, short of genius grants and the kindness of strangers, the creative life isn't possible without sales.

That said, it's hard not to get fatigued by the swirling, bullshit-polluted waters of the promotional universe, with its gluppity glup and shloppity shlop. Think too long and hard about selling yourself into a new life, and soon you won't be able to separate your "brand" from your actual personality, or differentiate between your friends and your professional networks. Then you'll need to seek professional help -- whether that's with a psychotherapist or a social media marketing consultant is anybody's guess.

HBO's "How to Make It in America" (premieres 10 p.m. Sunday, Feb. 14) dives straight into the eternal hellfire of a self-promoting universe without apology, and, bewilderingly enough, does so with a scruffy, scattered, early-30-something dude who can't seem to decide if he'd rather pass out business cards or pass out from drinking too many vodka shots at a loft party in Williamsburg. Our hero Ben (Bryan Greenberg) faces that timeless dilemma: follow another pipe dream, or pass the pipe?

Befitting a man who's half stuck in the past -- drinking too much and waking up in unfamiliar apartments -- and half stuck in some dingy present he never anticipated, Ben wears a haunted look of ambition and dread and hope and self-hatred. Even when he tells you his next big plan, there's a wavering in his voice that asks, "Will I ever make anything of myself or am I just a big loser?"

This makes the half-hour dramedy "How to Make It in America" a little bit like "Entourage," except without the money, the fame or the hot girls. ("Entourage" executive producers Mark Wahlberg and Rob Weiss are also producers on this show.) Well, no, there are hot girls here, too, but they won't sleep with these guys, because they're obviously not friends with a big-time movie star.

Yes, as annoying as it is to watch Drama and Turtle harvest lip-glossy sea donkeys with their flaccid pickup lines, it's even more disturbing to watch guys not get the girls because they're not well-connected. No one is rising above anything in this picture; the underlying ego-driven, self-promoting, screw-or-be-screwed backdrop is still there, it's just that we're hanging out with the have-nots this time instead of the haves. When Ben's friend Gingy (Shannyn Sossamon) tells him she's going to give him one of their friend Tim's photographs as a gift, he replies, "That's great, I mean these are like a framed reminder of what losers all my friends are."

Ben is kind of a dick, but you can hardly blame him. He's constantly confronted with the fact that he's stuck in limbo, that he hasn't actually achieved anything, that his dreams might never come true. Ben's ex, Rachel (Lake Bell), has moved on to a guy who's opening a bar in Manhattan. When Ben tries to hit on a girl at a party, she introduces him to her other suitor at the party, saying, "Marco is a painter. He just got back from a solo show in Mexico City."

This is the third show on HBO's roster (along with "Bored to Death" and, to a lesser extent, "Flight of the Conchords") that dabbles in the hipster-manchild milieu of Brooklyn, displacing Carrie Bradshaw's Manhattan as the place where strivers dream big and sleep around and fumble for a cigarette in gloves with the fingers cut off.

Despite his comment about what losers his friends are, everyone around Ben seems to at least be pursuing some creative goal, whereas Ben works in retail, moons over his ex, and frets about being a nobody -- that is, until he and his friend Cam (Victor Rasuk) dream up a scheme so crazy, it just might work!

Your own personal interest in "How to Make It in America" mostly relies on whether you can relate to Ben's plight of drunken despair mixed with uneasy ambition (I certainly can) and whether you want to relive those years (I certainly don't), let alone relive them against a backdrop of apparently soulless, skin-deep debauchery.

That said, Ben and Cam have their share of unsophisticated, naive charms. They're at least a little grittier and more imaginative than the first-year corporate lawyers of ABC's "The Deep End" or the competitive doctors-in-training of "Grey's Anatomy" and the other cute professional-class underlings that we're supposed to feel sorry for because -- oh dear! -- they're not big swinging dicks yet. On those shows, the stakes have to be artificially pumped up by cancer and alcoholic moms and married lovers because otherwise, would we really believe that whether or not "Grey's" Christina Yang gets to practice cardiothoracic surgery techniques before she actually starts a cardiothoracic surgery residency is going to determine her fate as a doctor?

Ben, on the other hand, is reduced to hanging out at the end of a long table at a bar, hoping to get a few minutes of face time with fashion designer John Varvatos, because he needs some connections to start his designer jean business. When he asks the guy next to him, "You a friend of John's?" the guy responds, "No! I'm a friend of his, and he's a friend of a friend of John's," you can't help but cringe. At least we're provided with a reminder of the sorts of things most of us would never be willing to do for money, fame or even hot girls. Even after kissing ass with reckless abandon, Ben and Cam are only granted an informational interview with one of Varvatos' associates, who immediately tells them that they're kidding themselves.

Meanwhile, even Ben's egocentric blowhard friends are reduced to hustling constantly, whether they're successful or not. "I didn't find photography, photography found me," Ben's friend Tim (Is that Billy Lush?) tells some strangers at his gallery opening. "I was living in a halfway house, I stole a camera from The Wiz, and I just started shooting. I mean, true art is all in the streets, everything else is bullshit. By the way, I'm having a very special deal on my 20 by 24 prints ..." See also: Johnny Drama, take deux.

But the lowest moments of the show come when Ben and Cam bicker over whether or not they should dip into criminal territory to get the ball rolling.

Cam: Shady or not, at least I'm still going for it, not working for the man like you.

Ben: What are you, 12? How long are you going to keep saying "Fuck the man" for?

Cam: Until we are the man!

Hold on a minute. Was that Turtle talking?

So that's what it all boils down to: Ben and Cam want to be the man. They're not designing jeans because they're passionate about fashion -- not as far as we can tell, anyway. They just want to have more money and get laid more often.

If this were a show about creative passion, then maybe Ben and Cam would be a little more interesting than the glossy professional yuppies on every other channel, straining to make that promotion and bag that babe. Unfortunately, as Ben and Cam demonstrate, more often than not the desire to "make it" is exactly as vague and empty as those two words imply.

"How to Make It in America" may have set out to create a humbler, more down-to-earth version of "Entourage," but it mostly succeeds at reminding us that not having fame or money doesn't necessarily make you more down to earth. From world-famous pop stars like John Mayer to that kid who made fun of your shoes in the fifth grade, douche bags are born, not made.