I knew my cousin would be competing in the Olympics. But I wasn't prepared for how wild it was -- or how she'd fare 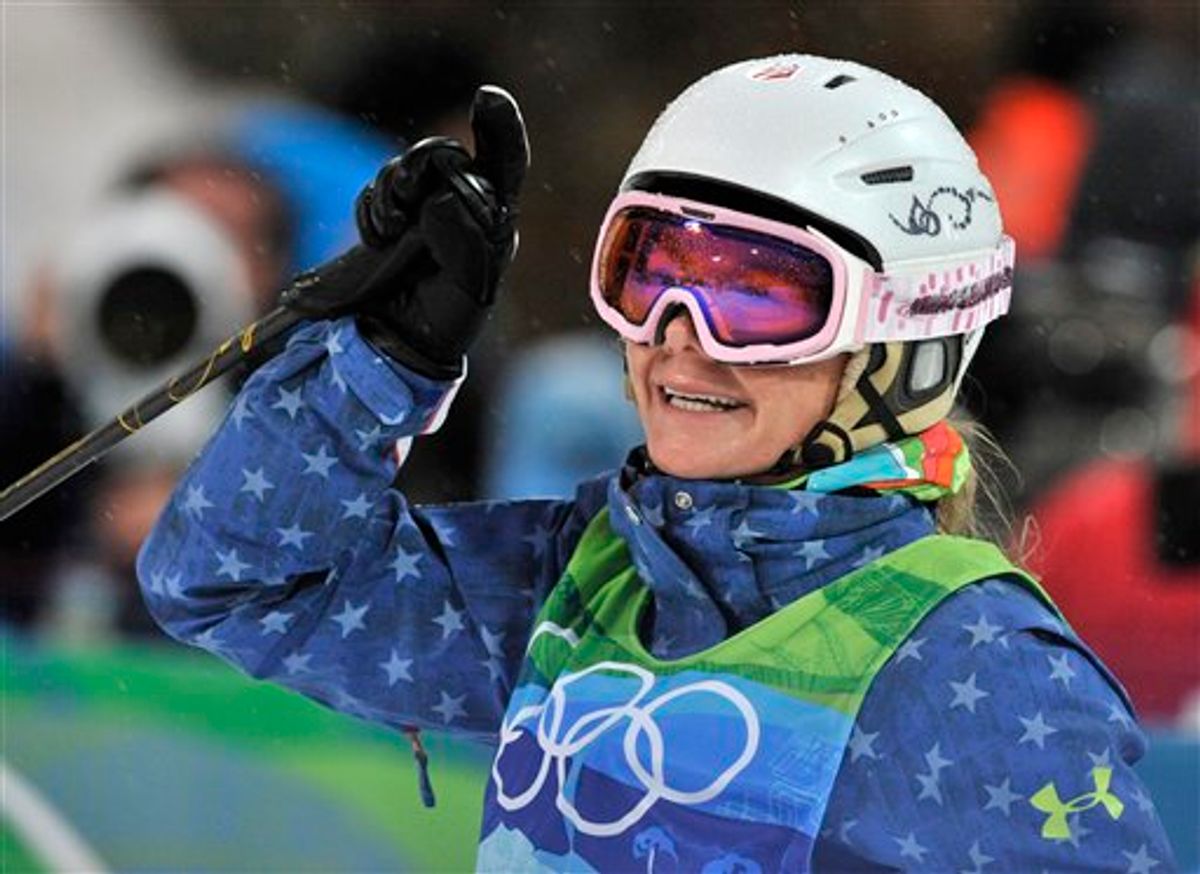 I've never had a more personal connection to sports than I did last night, the first of the 2010 Winter Olympics. An actual real live family member of mine, Michelle Roark, competed for a medal. When I say "family member," I'm defining the term quite loosely. Technically, Michelle, my step-uncle's sister's stepdaughter, is no more my relative than, say, Sidney Crosby, Apolo Ohno, Bing Crosby or Yoko Ono. Yet my extended family is freakishly large, strangely tight-knit, and almost disturbingly supportive, a big, goofy tent that holds a lot of people. When Michelle stood at the top of the hill for her qualifying run in the Women's Freestyle Mogul competition, we were all giving her a metaphorical push.

Michelle got a lot of press leading up to the games, and not just because she was the 2009 U.S. freestyle skiing champion with a batch of international victories under her jumpsuit. On a U.S. Olympic team that includes a "Dancing With The Stars" champion and a longhaired snowboarding corporation, Michelle gets a perfect score from the eccentricity judges. As the Wall Street Journal reported in October, she stands two classes short of a degree in chemical engineering from the Colorado School of Mines, and uses her scientific skills to run a natural perfume company called Phinomenal. She mixes her potions herself in a Denver lab next door to a warehouse where she trains for mogul runs by jumping on a trampoline. Her company's name, explained the WSJ, derives from the phi, or the number 1.618, otherwise known as the "Golden Ratio," which appears in the length of plant stems, DNA strands, and serves as the architectural basis of the Parthenon. Before competing in a race, Michelle spritzes a blend called "Confidence," made of Bulgarian rose oil, Italian Bergamot and Florida grapefruit, on the back of her neck and behind her ears.

All of this is true.

When I last encountered Michelle, at a family wedding in the summer of 2008, she was two years past competing in Torino (where she finished 18th after an unfortunate stumble) and had endured three surgeries on each knee. Yet, as she entered her mid-30s, she was still poised to make a medal run in Vancouver. But she spent more time talking about her fragrance line than she did about her chances at making the Olympics, and she did so in a tone so enthusiastic, so chirpy, and so optimistic, that I, despite a series of brutal hangovers that plagued me all weekend, almost found myself sharing her enthusiasm for life.

One morning, on the lawn of the house where we were staying, she led more than a dozen family members through a semblance of her brutal daily workout. Not about to humiliate myself in such a forum, which featured more organized lunging than makes me comfortable, I watched from an upstairs window, thinking that Michelle was one of the coolest, weirdest, most interesting people I've ever encountered. How could you not root for someone like her?

So when my stepcousin, in town with his family last weekend, told me that Michelle had qualified for the Olympics, I knew my viewing agenda was set. She'd finished fourth out of four American women in her event, but that still put her in the top eight in the world. "She definitely has a chance to medal," he said.

I kept that in mind as Michelle took to the hill last night. Honestly, I hate skiing, and therefore had no idea what I'd be watching. When I saw that Michelle had to go down a steep, slushy black diamond run punctuated by two over-iced ramp-like ski jumps, I thought, I wouldn't even try that on Xbox. My respect for her grew a thousandfold.

And then she launched her qualifying run, all five feet, 105 pounds, and 35 years of her. It included some kind of 720-degree spin that just looked amazing and seemed to really impress color announcer Jonny Moseley, who knows a thing or two about such matters. Michelle had been a competitive figure skater in a former incarnation, Moseley said, and "she's always been a great spinner." She ended the qualifying round in seventh place, and her Facebook update read, "I landed my 720, qualified in the top 10, going for gold!!! Thanks for all your support and positive vibes!!"

It was 11:05 p.m. before she made another appearance on the screen. Canadian ace Jenn Heil and two quirky American gals, Shannon Bahrke (with her pink hair and her own business roasting coffee beans in her garage), and 23-year-old Hannah Kearney had run stronger than Michelle in the qualifying, and a few others stood between her and a medal. Thus, Michelle took the Olympic stage for almost certainly the last time. Less than ten seconds into the run, on her first jump, she tried another 720, and executed it quite well. But then she landed, moved into her first mogul turn, caught a ski in the slush, and hit the skids, taking an awkward cross-hill tumble. She then got up nobly and cruised down toward what would eventually be a 17th-place finish. Her tremendously risky jump, and the knowledge that she'd gone for it all, would have to be its own reward. (Kearney won gold; Heil, silver; Bahrke, bronze.)

It had been a tough week for Michelle. On Wednesday, the Washington Post reported, her husband Mike Hormell was banned from the Olympics after officials say he attempted to watch her practice without proper clearance. Michelle claimed that Mike had the paperwork but Olympic officials say they didn't have it; appeals to the USOC went unheeded. This must have disappointed her deeply. I can't think of a sweeter and more supportive person than Mike, who stands quietly, calmly, and good-humoredly in the face of Michelle's awesome whirlwind. But she still went out there and pushed herself to the true Olympic edge.

I also know for sure that Michelle had many other loved ones watching her on the course, from parents to cousins to children of cousins, to the children of cousins' children. My family always puts in more than a token appearance. And the rest of us were watching her at home, admiring her spirit, and proud to call her, um, third stepcousin twice removed or whatever. As someone who may or may not be my relative posted on her Facebook page: "Way to fight it out, Michelle! It doesn't matter how you fall but you got up and showed you are a true champion!!"

Indeed. Michelle Roark is the best, and around the country and maybe the world, all the Roark/Dougherty/Porter/King/Pollack/Allen/Hummel/Smith/ Schein/Deimerts are full of love and pride tonight.

Now everyone else buy her perfume, because it smells really good.