Not his father's son

Good riddance to Evan Bayh, who set out to be every Republican's favorite Democrat -- and mostly succeeded 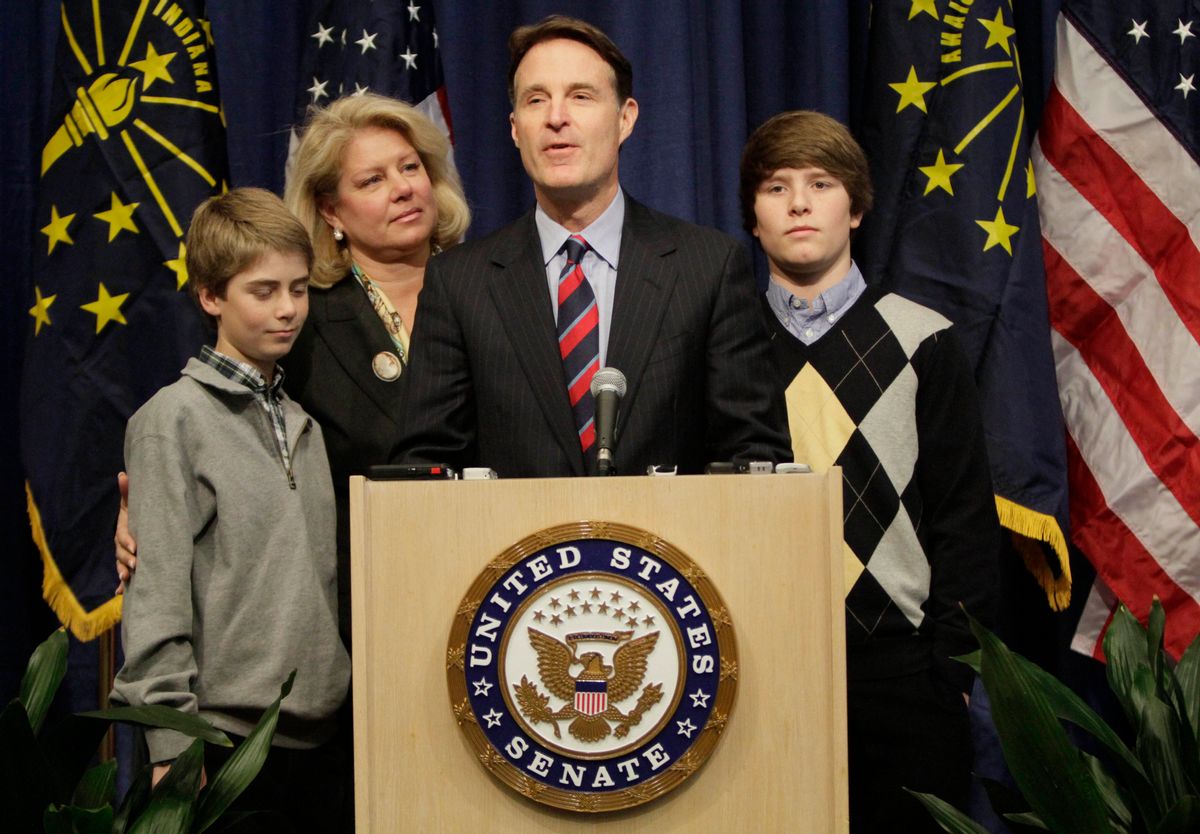 Sen. Evan Bayh, D-Ind., center, speaks while flanked by his sons Nick, left, and Beau, right and wife Susan at a news conference announcing he will not seek re-election in Indianapolis, Monday, Feb. 15, 2010. Bayh is serving his second six-year term in the Senate, and is a centrist Democrat from a Republican-leaning state. (AP Photo/AJ Mast) (Aj Mast)
--

It was 30 years ago that Bayh, then a 24-year-old law school student, helped run the re-election campaign of his father, Senator Birch Bayh. An unrepentant liberal with national aspirations (he'd run for president in 1976), the elder Bayh was targeted by a then-emerging network of "New Right" activists and fundraisers, who pilloried him as a big spender and slammed his support for abortion rights, gay rights and school busing.

As expedient as it might have been, Birch Bayh refused to back down from his principles in that campaign, an honorable stand that hastened his demise. On Election Day, he was defeated -- handily. By Dan Quayle. At 52, his political career was over.

His son, it seems, was taking notes.

Evan Bayh inherited all of his father's drive for national office but none of his progressive backbone. From his father's defeat, he seemed to draw a lesson: You can dream big dreams if you're a Democrat from Indiana -- you just can't be proud to be a Democrat. And that has been the defining principle (to the extent there's been one) in Evan Bayh's quarter-century political career, which began with a successful 1986 campaign for secretary of state in Indiana and which now may be ending, with his stunning decision to exit the Senate after two terms.

To his home state's largest newspaper, Bayh painted himself as an innocent bystander in a Capitol overrun by partisan bickering -- a "centrist" surrounded by the extremists of the left and the right. (In Bayh's telling, the left is always equally, if not more, culpable for the country's problem's as the right.)

“Just last week, a major piece of legislation to create jobs -- the public’s top priority -- fell apart amid complaints from both the left and right," he told the Indianapolis Star. "All of this and much more has led me to believe that there are better ways to serve my fellow citizens, my beloved state and our nation than continued service in Congress.”

Funny that he mentioned jobs. After all, it was Bayh and fellow moderate Senate Democrats who insisted last year that President Obama's first major initiative as president -- the stimulus bill -- be pared by about $100 billion, depriving the economy of hundreds of thousands of new jobs. Not that it mattered much to Bayh, who showed far more concern last year in the GOP's new pet issue: government spending and the federal deficit.

This has always been Bayh's way -- to position himself as every Republican's favorite Democrat. It's how he stepped out of his father's shadow back in 1986. It's how he won election as Indiana's governor in 1988 (even as the Bush-Quayle ticket was carrying the state in a romp) and re-election in 1992. And it's how he became the next it-boy of the Democratic Leadership Council in the mid-'90s, back when that designation was actually helpful in Democratic politics. With Bill Clinton's blessing, Bayh keynoted the 1996 Democratic convention in Chicago and a promotion to the Senate followed two years later.

From there, the question was when -- and not if -- he'd make his move into national politics. The moment nearly arrived in the summer of 2000, when Al Gore mulled whether to tap Bayh, John Kerry, John Edwards or Joe Lieberman as his running-mate. Lieberman got the nod, but it was only the first of three times that Bayh would make a VP short-list.

He looked briefly at running for president himself in 2004, but backed out early -- before Iraq began spiraling out of control, when George W. Bush still seemed a safe bet for a second term. He looked harder at 2008, travelling to New Hampshire and bragging to the locals about his high vote totals in red state Indiana. The message was classic Bayh: Elect me not for what I believe in, but because of who I know how to appeal to. But when Barack Obama unexpectedly emerged as a candidate in the fall of 2006, Bayh realized there wasn't any room left and backed out, endorsing Hillary Clinton in a calculated effort to curry favor as a potential running-mate. (As it was, he still managed to make Obama's short list.)

In this career narrative, a different motive for Bayh's Senate exit can be seen. He never set out to be a Senate lifer. He ran for the office because it was the next logical step on his rise to the White House, and when he got it, he made damn sure not to expose himself to the same right-wing taunts that toppled his dad. His goal wasn't to make a mark in the Senate; it was to hold onto the seat long enough to make the next logical move, to a national ticket.

But now, at the age of 54, Bayh's national window is closing. Three presidential cycles have come and gone since 1998 and he's still in the Senate. Youth was always part of his selling point, but in 2016 -- the next time the Democratic presidential and vice-presidential nomination are likely to be open -- he'll be 60. He can hear the footsteps behind him. It raised the question: What's the point of staying in the Senate?

Then there's the climate of 2010. Sure, Bayh was running well ahead of Dan Coats, his probable GOP opponent. But just a few weeks ago, a poll showed him in a dead heat with Mike Pence, who then opted not to run. That had to be jarring for Bayh, who won by 32 points in 2004. He watched a national GOP tide take out his father in 1980. For all of his bows to the right, how sure was he that he's be any safer himself in 2010?

Birch Bayh's Senate career was a remarkable one. He knocked out the loathsome Homer Capehart in 1962 and beat back two strong GOP challengers, William Ruckelshaus in 1968 and Richard Lugar in 1974 -- all well pursuing a defiantly progressive agenda. In perhaps his proudest moment, he turned on the Vietnam war early -- at great political risk -- and helped push through the 26th Amendment, lowering the voting age to 18, so that those fighting in Vietnam could vote on the leaders who'd decided to send them there.

And his son? Well, when George W. Bush launched his "war on terror" and turned his focus to Iraq, no Democrat cheered louder than Evan Bayh. And even when the tragic folly of that war and of the broader neoconservative agenda became apparent, he learned nothing. A confrontation with Iran? Sign Senator Bayh up.

24 years ago, Evan Bayh set out to prove voters that he wasn't like his father. As his Senate career ends, we can safely say: Mission accomplished.