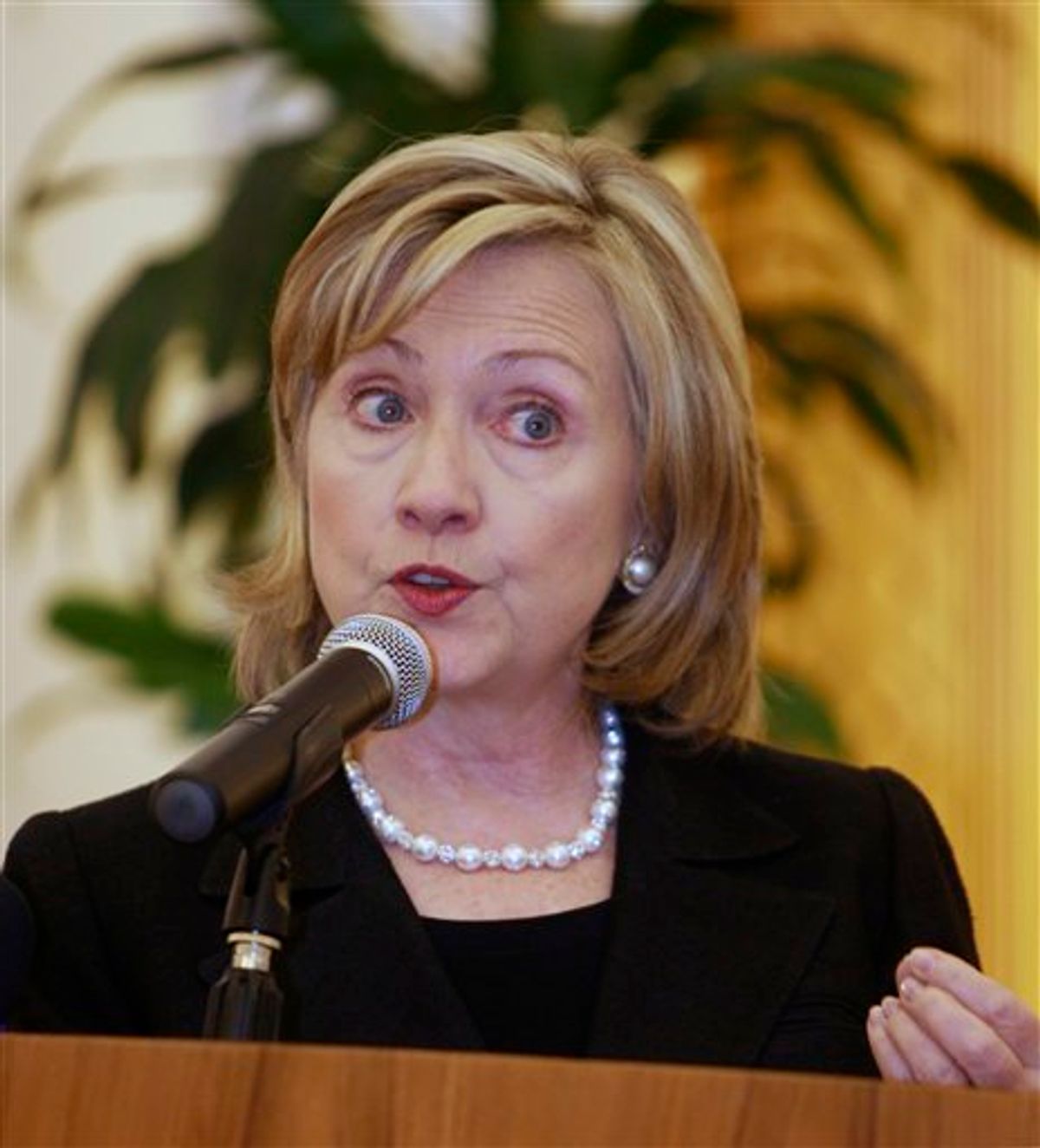 U. S. Secretary of State Hillary Rodham Clinton, seen during a press, after holding talks with Prime Minister and Foreign Minister of Qatar Sheikh Hamad bin Jassim bin Jabor Al Thani, in Doha the capital of the State of Qatar, Sunday, Feb. 14, 2010. Clinton arrived Sunday in Qatar, where she is holding talks with top government leaders and speaking at the U.S.-Islamic World Forum. (AP Photo/Maneesh Bakshi) (AP)
--

U.S. Secretary of State Hillary Rodham Clinton said Monday that Iran is becoming a military dictatorship, a new U.S. accusation in the midst of rising tensions with Iran over its nuclear ambitions and crack down on anti-government protesters.

Speaking to Arab students at Carnegie Mellon's Doha campus, Clinton said Iran's Revolutionary Guard Corps appears to have gained so much power that it effectively is supplanting the government.

"Iran is moving toward a military dictatorship," she said. "That is our view."

Last week the U.S. Treasury Department announced that it was freezing the assets in U.S. jurisdictions of a Revolutionary Guard general and four subsidiaries of a previously penalized construction company he runs because of their alleged involvement in producing and spreading weapons of mass destruction.

The Revolutionary Guard has long been a pillar of Iran's regime as a force separate from the ordinary armed forces. The Guard now has a hand in every critical area, including missile development, oil resources, dam building, road construction, telecommunications and nuclear technology.

It also has absorbed the paramilitary Basij as a full-fledged part of its command structure -- giving the militia greater funding and a stronger presence in Iran's internal politics.

Asked if the U.S. is planning a military attack on Iran, Clinton said "no."

The U.S. is focused on gaining international support for sanctions "that will be particularly aimed at those enterprises controlled by the Revolutionary Guard, which we believe is in effect supplanting the government of Iran," she said.

Meanwhile, a semi-official news agency quoted the head of Iran's nuclear program as saying the country received a new proposal last week from the United States, Russia and France, three of the countries trying to rein in Tehran's uranium enrichment program.

Iran said that it was studying the joint proposal purportedly made after the country announced last week it had begun enriching uranium to a higher level than previously acknowledged. The ILNA news agency quoted Ali Akbar Salehi as saying various countries have also offered Iran proposals on a nuclear fuel swap, adding that Iran is reviewing all the proposals. He did not provide any more details.

The Obama administration is trying to "send a message to Iran -- a very clear message" that the U.S. is still open to engagement "but that we will not stand idly by while you pursue a nuclear program that can be used to threaten your neighbors and even beyond," Clinton said.

Later, as she boarded her plane for the next stop on her Middle East trip, Clinton said, "The civilian leadership is either preoccupied with its internal political situation or is ceding ground to the Revolutionary Guard."

She told reporters traveling with her that it appears the Revolutionary Guard is in charge of Iran's controversial nuclear program and the country changing course "depends on whether the clerical and political leadership begin to reassert themselves."

She added: "I'm not predicting what will happen but I think the trend with this greater and greater military lock on leadership decisions should be disturbing to Iranians as well as those of us on the outside."

Clinton said the Iran that could emerge is "a far cry from the Islamic Republic that had elections and different points of view within the leadership circle. That is part of the reason that we are so concerned with what we are seeing going on there."

In her Doha appearance, Clinton also said she foresees a possible breakthrough soon in stalled peace talks between Israel and the Palestinians.

"I'm hopeful that this year will see the commencement of serious negotiations that will cover every issue that is outstanding," she said, adding that "everyone is anticipating" progress after more than a year of impasse between the negotiating parties.

The peace talks broke down in late 2008 with Israel's incursion into Gaza, which had launched rocket attacks on Israeli targets.

Clinton spoke in an interview with the Al-Jazeera TV network before a live audience of mostly Arab students at the Carnegie Mellon campus.

In remarks in the Qatari capital on Sunday, Clinton said she and the president are disappointed that the administration's efforts to restart Israeli-Palestinian peace talks had failed thus far.

Reflecting the extent of concern in the Persian Gulf region about a U.S. confrontation with Iran, another member of the audience asked Clinton about the outlook for improving relations with Tehran. Clinton reiterated the Obama's administration view that Iran has violated its international obligation to use nuclear technology only for peaceful purposes. And she regretted that Iran has not accepted U.S. offers of nuclear negotiations.

Clinton makes a point of raising the topic of women and girls' rights whenever she travels abroad. In a speech Sunday to a forum on U.S.-Muslim relations, she stressed it in the context of U.S. support for nations seeking to build democratic institutions.

"As nations strive to build and strengthen governments that reflect the will of their people, grounded in their own traditions, they can count on the United States to be their partner," she said. "But the will of the people means the will of all the people, men and women. Women's rights are an issue of singular importance to me personally and as secretary of state."

She also cited the issue of violence against women, without mentioning any specific country.

"Even today, in 2010, women are still targets of violence," she said Sunday. "And all too often, religion might be used to justify it. But there is never a justification for violence against women. It is not cultural. It is criminal. And it is up to religious leaders to take a stand for women, to call for an end to honor killings, child marriages, domestic and gender-based violence."

Meanwhile, a semi-official news agency quoted the head of Iran's nuclear program as saying the country received a new proposal last week from the United States, Russia and France, three of the countries trying to rein in Tehran's uranium enrichment program.

Iran said that it was studying the joint proposal purportedly made after the country announced last week it had begun enriching uranium to a higher level than previously acknowledged. The ILNA news agency quoted Ali Akbar Salehi as saying various countries have also offered Iran proposals on a nuclear fuel swap, adding that Iran is reviewing all the proposals. He did not provide any more details.