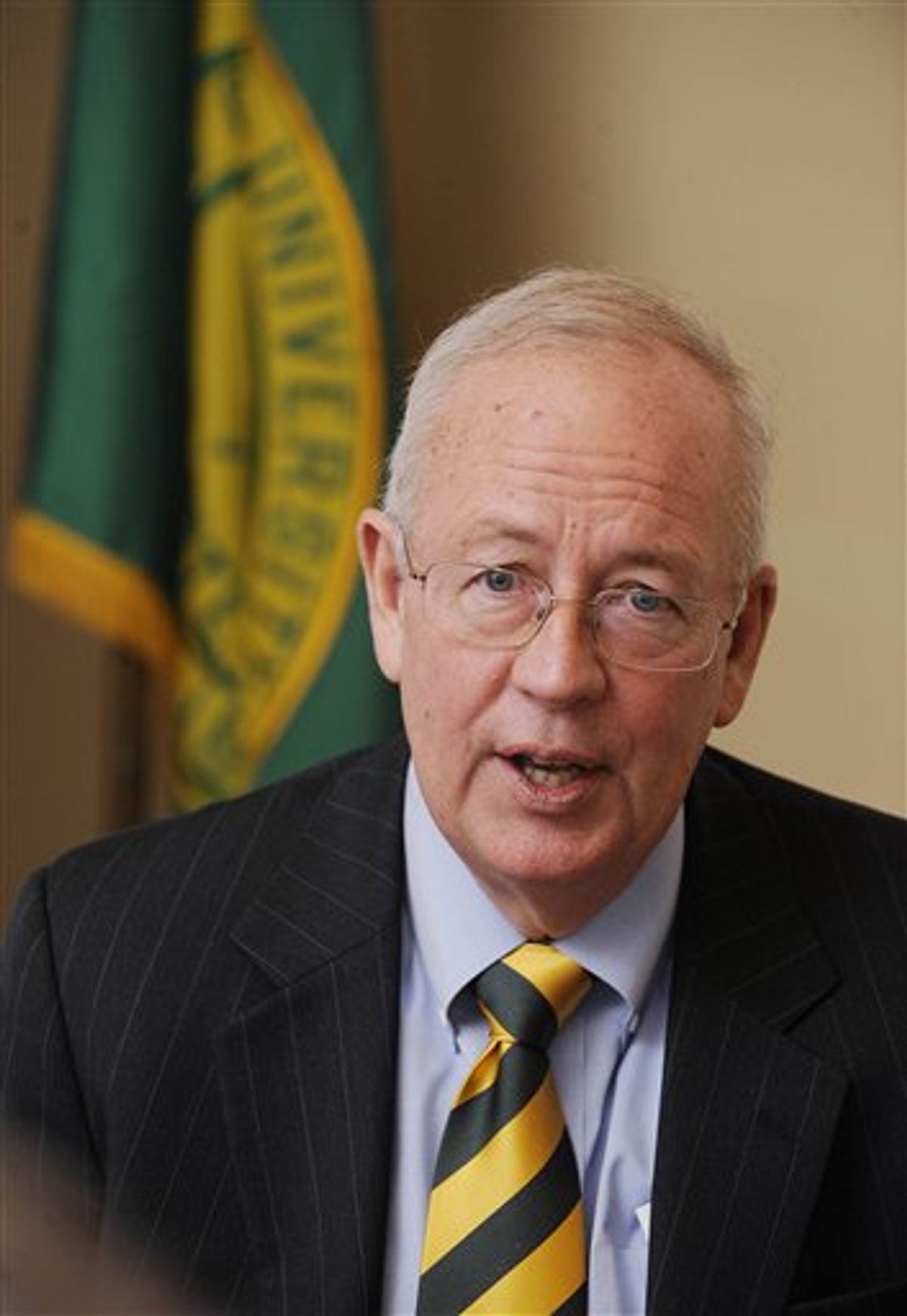 Conservatives love to bash academia as little more than an elitist welfare state, a plush cushion to soften the landing for people who can’t cut it outside. Tenured radicals and left-wing nuts  don't want to work, so they sit around sipping chardonnay and lounging among dusty old volumes by Chairman Mao.

It’s easy to forget, then, that there is also a right-wing academia, to which fallen conservative stars of various sorts retire. A reminder came over the long weekend, with news that former Grand Inquisitor -- ahem, special prosecutor -- Ken Starr has taken a new job as president of Baylor University.

Starr, who has been dean of Pepperdine University’s law school since 2004, is a longtime star of the right-wing legal firmament. He was appointed to the District of Columbia Circuit Court of Appeals by Ronald Reagan, and became solicitor general under President George H. W. Bush.  Baylor, where he’s now moving, is a very conservative Baptist institution. (Rather ironic, isn’t it, that its new president is possibly most famous for authoring a quasi-pornographic legal brief?)

Starr is hardly the only one to find this kind of refuge. Quite a few cast-aside figures of the Bush years have wound up in universities, including:

Alberto Gonzales (former attorney general): Disgraced by his role in any number of administration scandals, Gonzales was finally driven from office by the affair surrounding the dismissal of a number of U.S. attorneys, apparently for their refusal to prosecute cases at the request of the administration. Gonzales spent most of the hearings on the subject acting like an Alzheimer’s patient, and then fled back to Texas. In 2009, after some almost-sympathetic casting about for work, Gonzales landed a job teaching political science at Texas Tech, over the objection of the faculty.

John Ashcroft (former attorney general): The first chief of the Justice Department in the Bush administration was especially famous for two things: presiding over the creation of the post-9/11 surveillance apparatus, and arranging to cover the bare breasts on the statue of justice in the department’s building. So it will come as little surprise that Ashcroft is now a Distinguished Professor of Law and Government at Regent University. Regent, of course, is Pat Robertson’s outfit, and one of several ultra-conservative Virginia institutions famous for training armies of lawyers and operatives to serve in conservative politics.

Bill Frist (former Senate majority leader): The former senator and one-time presidential prospect is also a surgeon, and the scion of a major clan in the healthcare business: The Hospital Corporation of America was founded by his family. It makes some sense that Frist is now teaching a course on "the financing, delivery and quality" of healthcare, at Vanderbilt University’s Owen School of Management. It makes some sense, but you have to wonder if Frist maybe could’ve accomplished more on this front when he was actually the leader of a branch of government.