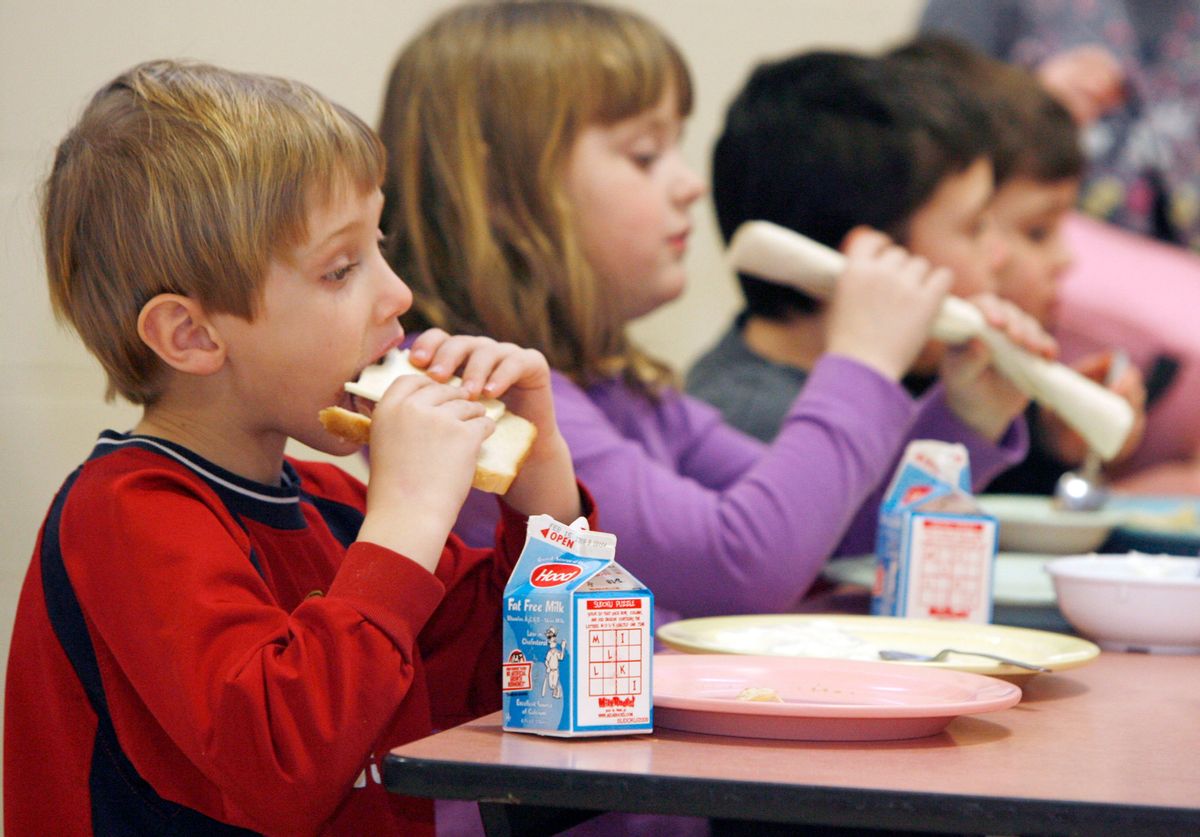 A version of this post first appeared on Dr. Ayala's Open Salon blog

School food received some major media attention in the past week.

Say what? The federal government is trying to limit big food’s footprint in our schools?

If Agriculture Secretary Tom Vilsack gets his way, he intends to do just that: "Food served in vending machines and the a la carte line shouldn't undermine our efforts to enhance the health of the school environment," he said.

A short introduction to school food

The National School Lunch Program was created with a dual purpose -- to feed kids and prevent dietary deficiency and to provide an outlet for surplus agricultural commodities. One can already see that the dual purpose of the program throws in some problematic conflicts of interest, but let’s go on.

The government provides $2.68 per day for kids qualifying for a free lunch, $2.28 per day for a reduced-price lunch, and $0.25 per day for all other kids. That sum includes the overhead and facility costs associated with the meal, which leaves just $1 -- or less -- for the food itself. This is clearly not enough money to fund from-scratch cooking or quality, fresh produce. President Obama proposes bumping up the school lunch budget a tad -- which will be better than nothing -- but the additional funding probably won’t afford a huge amount of change.

What kind of meal can you get for $1?

An adventurous school teacher vowed to eat the school lunch every day this year, and she’s posting musings and photos of her cafeteria meal in a daily blog. Take a look at the pictures (take note of the amount of packaging) and you’ll get the idea.

I’ve devoted several posts to this subject and analyzed the typical school lunch menu, concluding that the best description for this food is "fast-food" (Full disclosure: I’m both a pediatrician and vice president of product development for a company that makes herb-infused water). Overall, it’s salty, sweet and fatty; the meat is breaded and crunchy; and it’s been highly processed -- even the fruit and vegetables aren’t fresh for the most part. Most of the schools have no kitchens and just heat and un-wrap low-grade foods. Nevertheless, the subsidized school lunch complies with some nutritional guidelines and provides plenty of protein and vitamins, and while I think guidelines based on the nutrient profile of foods alone are an ill-advised way to evaluate food quality, at least some rules exist.

But if the federally sponsored and regulated school lunch program leaves much to be desired wait till you get the full picture, because challenging the school lunch, are what are called competitive foods.

These competitive foods -- comprised of foods and beverages sold in the cafeteria or in a school store, from a vending machine or in fundraising events -- are expressly marketed to our kids and make up a big part of what kids actually eat while they’re in school.

Kids love the vending machines and the school stores, but that’s not the only reason these outlets exist. Schools depend on the revenues that vendors bring in to fund much-needed programs. This creates an unusual and worrying conflict, in which schools share an interest with the manufacturers of snacks and junk foods.

Here are some facts about the scope of the competitive food problem. (The source is an article in the Journal of the American Dietetic Association that looked at data collected in 287 nationally representative schools and included 2,314 kids.)

The most commonly consumed competitive foods:

So, we have low-quality foods sold in the schools competing with a low-quality school lunch -- a competition that’s a lose-lose for our kids. Wherever our kids turn they have snacking opportunities that contribute mostly empty calories.

The only existing federal restriction on foods sold in school is that foods of "minimal nutritional values," such as candy and soda, won’t be sold in the cafeteria during meal times. That of course doesn’t mean they can’t be sold right outside the cafeteria doors. And although some school districts have taken initiatives to impose restrictions banning some junk food sales in schools, progress is very slow.

It is high time school food begins to resemble a lesson in how to eat healthfully. Right now, the school lunch -- and especially the school foods for sale -- resemble all that’s wrong in our popular food culture, and explain quite well why one in three American kids is overweight or obese.

Kids spend half their waking hours in school and consume half of their daily calories while on campus. Changing school food is critical in the effort to combat obesity.

I applaud the White House and especially our First Lady for taking on this important issue. "Let’s Move" is the politically savvy way to name what will have to really become a "Let’s Eat Less Junk" effort—but whatever it takes let’s indeed move it!