Helen Mirren, a screen siren at 64 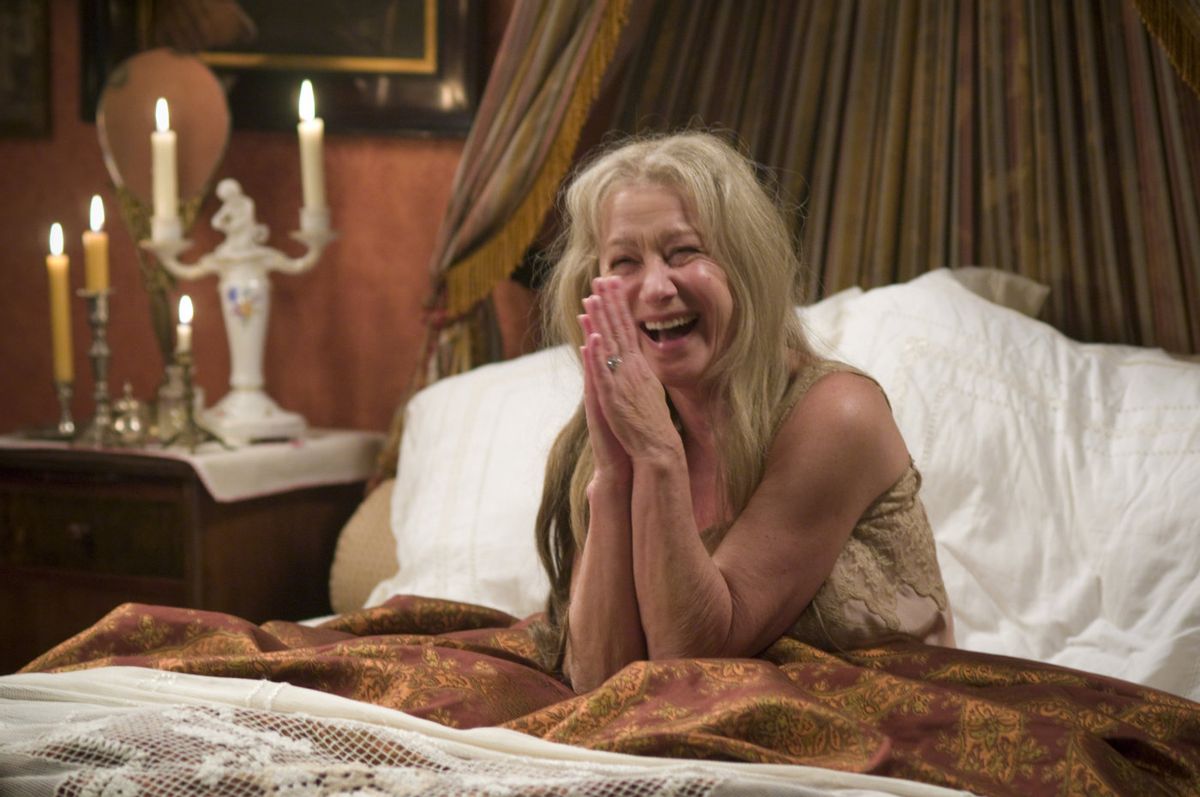 Helen Mirren in "The Last Station."
--

I could watch Helen Mirren in just about anything -- even, it turns out, Michael Hoffman's well-intentioned but overstuffed "The Last Station." Based on Jay Parini's novel of the same name, the movie focuses on the final years of Leo Tolstoy's life (he's played by Christopher Plummer, in a goaty beard that looks to have been attached with spirit gum), specifically on the author's alternately contentious and affectionate relationship with his wife and muse, the Countess Sofya (Mirren). Sofya, who is what we might consider in modern vernacular "a handful," fears that her aged husband, who espouses a philosophy that includes the denunciation of private property, is about to sign a new will that will leave her and the couple's numerous children penniless. She uses her considerable charm to cozy up to Valentin (James McAvoy), a Tolstoy acolyte whom she believes has the power to dissuade the great man from signing his life's work away.

I've watched "The Last Station" twice, the first time as part of a rushed, drive-by flurry of pre-Christmas viewing, the second in a more leisurely capacity, to focus specifically on Mirren's performance. The picture hasn't much grown on me, I'm afraid: It could be that in trying to keep this period piece lively and modern, Hoffman ("Restoration," "A Midsummer Night's Dream") instead nudges it too far into slapstick territory. Its notes of gaiety feel forced, its moments of sorrow even more so.

But my second viewing did make me realize that Mirren's performance is more slippery and more complex than I'd originally thought it to be. Mirren just is, and always will be, a sexy actress. Although an individual guy will often claim to be attracted to a certain type -- one may like brunettes, another blondes; some like 'em skinny, others prefer more ballast -- I have never met a straight man who didn't find Mirren hopelessly sexy. (I'm sure there's someone out there, but I have yet to meet him personally.) Mirren's role in "The Last Station" is, on the surface, about as unsexy as it gets: Her wardrobe consists largely of high-necked lace-trim blouses; she's often swaddled in cozy but nondescript shawls, the Russian turn-of-the-century equivalent of Eileen Fisher; and her demeanor, as a demanding, difficult wife, is often hard to take, and not just for us, the audience. Paul Giamatti's Vladimir Chertkov, the rather conniving Tolstoy disciple who's doing his damnedest to get that new will into action, hurls these words at her in a fit of frustration, loathing and barely disguised misogyny: "If I had a wife like you, I would have blown my brains out. Or gone to America."

We can see why he feels that way. At times Sofya surveys her husband -- Plummer plays him as a still-sharp but somewhat doddering presence -- with suspicious feline eyes. She's driven by practicality; she knows she has to look out for her own best interests and those of her family. But there are times you wonder if she isn't somewhat motivated by greed as well. Mirren vests the character with unrepentant haughtiness: Sofya carries herself like a princess, with the attendant expectation that she naturally ought to be treated like one. Her movements are precise and businesslike; she has the resolute, straight-backed gait of a once-great beauty who has had to adjust, graciously if reluctantly, to the realities of aging.

Sofya simpers and coaxes, complains and cajoles. She drives her husband nearly to madness. And then, just when you think you, let alone he, can't possibly take any more nonsense from this infuriatingly high-strung creature, Sofya turns kittenishly tender. And that's the secret power, the double whammy, of Mirren's performance here. Her Sofya is a manipulator all right: We can see how sometimes she might act perplexed and fragile as a means of getting her way. But Mirren shows her character from both sides of that mirror: At times Sofya really is confused and vulnerable, and with just a coquettish glance or a hint of a weary smile, Mirren somehow defines the difference between the reality and the manipulation -- or, more accurately, shows how they blur into a maddeningly human whole.

There are places where the performances in "The Last Station" -- even Mirren's -- feel oversized in a faux-Russian way, the acting equivalent of a cartoonishly furry Cossack hat. (Plummer is a consistently fine actor who at last has his own supporting-actor Academy Award nomination for his role in this movie. It's a perfectly adequate performance, but not nearly as stunning as the one he gave in, say, Michael Mann's "The Insider.") But Mirren is always pleasurable to watch, and though this role perhaps qualifies as one of her more stately roles (à la her Oscar-winning turn in "The Queen"), as opposed to a sexy one (this is no "Calendar Girls"), it does offer a sense of her complexity and her range. When Sofya, hoping to coax her grumpy, frowning husband into bed, reaches out to him from amid the bedclothes, the curve of her bare arms suggest the freshness of a young ballerina. "I'm still your little chicken!" she implores, momentarily shrinking the distance between the eagerness of young love and the resigned negligence that aged couples too often settle into. And in that moment Mirren, who is 64, is a sex symbol once again.